The Latest: Syracuse to test 3 times weekly during season 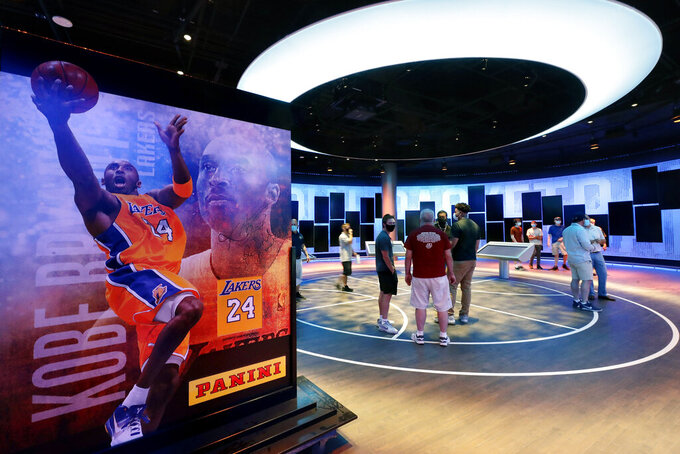 An exhibit at the Naismith Memorial Basketball Hall of Fame, in Springfield, Mass., shown Tuesday, June 23, 2020, features images of Los Angeles Lakers' Kobe Bryant. Bryant was among nine people, along with his 13-year-old daughter Gianna, killed in a helicopter crash in January of 2020, in California. The museum is scheduled to reopen in the beginning of July 2020 after a renovation. (AP Photo/Steven Senne)

Syracuse athletic director John Wildhack said the Orange will continue weekly testing for the new coronvirus during football training camp and will then ramp it up to three times a week during the season, slated to begin Sept. 7.

Wildhack said in a statement Friday that since student-athletes arrived on campus more than 1,200 coronavirus tests have been completed and five individuals had tested positive. He said they have since completed the necessary isolation requirements.

Wildhack said there have been no positive tests in the last four weeks and there are zero active COVID-19 cases among student-athletes. He said the team did not practice during the day as planned because of a miscommunication about when weekly testing would begin.

It marked the first time the school in upstate New York had made its testing results public.

Alabama running back Najee Harris is hoping he and his teammates can deal with 12 weeks “of just really trying to be safe.”

The Crimson Tide star and other veterans have preached caution to teammates while also remaining steadfast on wanting to play this season amid the pandemic.

“We try to tell them don’t go to parties, but like it’s kind of hard to tell somebody not to go to a party in college,” Harris said during a Zoom call. “We understand it, but we’re kind of just telling them, ‘If you do go to a party, like make sure you guys are overly safe.’”

That means wearing a mask, keeping distance from others and not picking up items after others, “because what you do plays a part in what happens to the whole team.”

Alabama and other Southeastern Conference team open preseason camps on Monday ahead of a season that has already been pushed back to Sept. 26. They’re set to only play league games.

“Every day we take risks, and it might be a little risky,” Tide quarterback Mac Jones said. “But we feel comfortable and we feel safe.”

The track, in New Kent County, about 30 miles from Richmond, cited “recent test results” in a release announcing the decision, but spokesman Mark Hubbard declined to say how many people connected with putting on the meet had tested positive for the novel coronavirus.

Hubbard said the decision was made with collaboration from the Virginia Department of Health, the Virginia Horsemen’s Benevolent Protection Association and the Virginia Racing Commission.

The meet was scheduled to run through Sept. 2, with racing on Monday, Tuesday and Wednesday.

The Ohio Valley Conference has postponed all fall sports including football, men’s and women’s cross country, women’s soccer and women’s volleyball and asked members to develop plans for league competition and championships in the spring.

The decision by the OVC Board of Presidents also includes the fall schedules for men’s and women’s golf and men’s and tennis along with the non-traditional seasons for baseball and softball.

But OVC members will be allowed to play up to four nonconference football games if a team is willing using NCAA standards for practice and and mental health guidance.

OVC commissioner Beth DeBauche says the board voted to postpone after careful deliberation of the current uncertainty with the COVID-19 pandemic. OVC officials will continue monitor the situation hoping students will be able to play their fall sports in the spring. DeBauche says the OVC intends to ensure the postponed seasons are not eventually canceled if facts support that decision.

The OVC’s plans to play winter and spring sports remain unaffected as of now.

The Houston Texans won’t have fans at their home opener on Sept. 20 against the Baltimore Ravens.

The Texans added on Friday they have yet to decide if fans will be allowed to attend games later in the season.

The Texans say a decision on fans attending games this season will be dictated by the COVID-19 pandemic in the Houston area, which is currently a hotspot.

Marshall and East Carolina have moved their football game from Aug. 29 to Sept. 12.

Both teams had Sept. 12 as an open date after earlier opponents changed their schedules. Marshall was supposed to host Atlantic Coast Conference opponent Pittsburgh that day while East Carolina was traveling to play South Carolina of the Southeastern Conference.

The game will be held at East Carolina’s Dowdy-Ficklen Stadium. No time for the game has been determined.

The update came Friday with the school saying that out of the last 765 tests administered since it last released results, only one person has come up positive for the coronavirus.

Kobe Bryant and the rest of this year’s Naismith Memorial Basketball Hall of Fame class won’t be inducted in 2020 — or at the birthplace of basketball.

The Hall announced Friday that the enshrinement ceremony will be held May 13-15, 2021, and the entire festivities will be moved to Mohegan Sun Casino in Connecticut.

This year was to be a highlight for the Hall of Fame, located in Springfield, Massachusetts. Bryant, killed in January in a helicopter crash, headlined a decorated class featuring Tim Duncan and Kevin Garnett that would have been enshrined in the recently renovated museum.

But the coronavirus pandemic scuttled those plans and hit the Hall so hard that it eliminated several full-time positions and cut senior management pay in the 25-40% range.

Hall of Fame President and CEO John Doleva says the rescheduled enshrinement festivities, the diminished museum visitation and the uncertainty regarding the Hall’s college and high school basketball events this fall “has forced us to make these very difficult decisions.”

Mohegan Sun is a long-time partner of the Hall. Doleva says it can a operate a “near-bubble” to provide a secure environment for guests.

Charleston Southern is suspending its 2020 football season. The school is part of the Division I Big South Conference and competes in the Football Championship Subdivision.

The Big South and the NCAA have canceled its plans for a fall championship, although the league did let member institutions play non-conference games if they wanted in the fall.

Charleston Southern said in it statement Friday the environment with COVID-19 was too “uncertain” to go forward in the fall. The school said the decision will let the football team prepare for games in the spring.

Crosby was placed on the list last week. The list was created for players who either test positive for COVID-19 or have been in close contact with an infected person.

He was removed on Friday and took part in his first practice.

Crosby is being counted on to contribute much more after recording 10 sacks as a rookie. He is slated to be a starting defensive end and is the top pass rusher on a team that has struggled to generate consistent pressure in recent years.

The ASUN Conference says it is postponing all fall sports because of the coronavirus pandemic.

“We’re not in the position today to guarantee it will happen, but we can promise to make every effort to get there. We owe that to our student-athletes, our athletic departments and our institutions,” ASUN Commissioner Ted Gumbart said in a statement.

League schools may continue with such activities like training and practice in accordance with NCAA, local and state guidelines.

The nine-team league operates mostly in the Southeast and does not play football. It is formally known as the Atlantic Sun Conference.