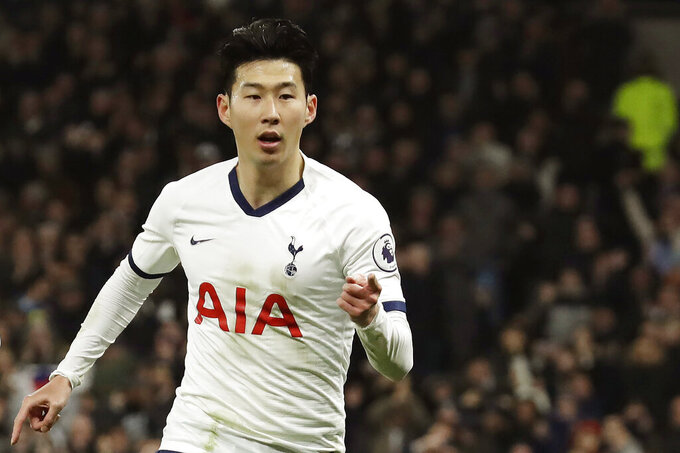 FILE - In this Wednesday, Jan. 22, 2020 file photo, Tottenham's Son Heung-min celebrates his goal against Norwich City during the English Premier League soccer match between Tottenham Hotspur and Norwich City at the Tottenham Hotspur Stadium in London, England. Tottenham forward Heung-min Son has started a three-week period of military service in his native South Korea. South Korea’s Yonhap News Agency says the 27-year-old Son reported to a Marine Corps unit on the southern island of Jeju and will be in camp until May 8. (AP Photo/Matt Dunham, File)

The Central Asian nation’s soccer federation says games on Sunday will go ahead as planned before the league is suspended until May 10.

The federation says its decision is in line with government measures to prevent the spread of the coronavirus.

The domestic season began on April 4. Games were being played without spectators.

Only a few other countries are still staging pro soccer, including Belarus, Nicaragua and Turkmenistan.

Tajikistan is one of the few countries which has not reported any cases of the coronavirus.

Aston Villa players will take a 25% pay cut to help the English Premier League club during the coronavirus outbreak.

“First-team players, first-team coaches and senior management have all agreed to defer 25% of their salaries for four months to assist the club during this period of uncertainty with a further review taking place at the end of this period,” club chief executive Christian Purslow said in a statement.

It was also announced that a National Health Service trust is to offer maternity care at Villa’s home ground in Birmingham following the success of a similar tie-up with nearby West Bromwich Albion.

France rugby player Mohamed Haouas will be free to resume playing after lockdown ends by serving his three-week suspension during it.

The prop was suspended for hitting a Scotland player during their Six Nations encounter on March 8 at Murrayfield — the last match to be played in the competition.

The French rugby federation says Haouas “can serve this punishment during confinement and can thus play again once the sporting season resumes.”

France is in lockdown until May 11 because of the coronavirus pandemic.

It is uncertain if and when the Six Nations matches can be completed.

English Premier League team Chelsea says it will not impose a pay cut on its first-team squad and instead will ask players to continue their support for charities during the coronavirus pandemic.

Chelsea also said it will not be furloughing any full-time staff, and casual workers and match day employees are being compensated by the club through to June 30.

The Blues have been in negotiations with their players about a salary reduction, reportedly around 10%, in an effort to save money during the current crisis. That is lower than the Premier League’s suggestion of 30% for all clubs but Chelsea has now decided to take a different approach.

Highlighting the PlayersTogether initiative launched by Premier League players earlier this month which aims to raise and distribute funds for National Health Service charities, Chelsea told its stars to focus their efforts on other causes.

“Representatives of the Chelsea board have recently held extensive talks with the men’s first team to discuss how they can contribute financially to the club during the coronavirus crisis," a statement on the club website said. “At this time, the men’s first team will not be contributing towards the club financially and instead the board have directed the team to focus their efforts on further supporting other charitable causes.”

The British government is increasing planning with sports bodies about the resumption of events once the coronavirus national lockdown is eased.

Government medical officials are involved in the talks about the logistics and health procedures required to allow sports competitions to restart.

The Premier League last played a game on March 9 and has plans to try to restart from June 8 once pandemic social distancing regulations are relaxed to allow training to resume for teams and there are sufficient COVID-19 tests available.

The national lockdown is currently in place until May 7. Cricket authorities have already said their sport won’t resume until July, but horse racing is currently only suspended until June.

British Horseracing Authority chair Annamarie Phelps tweeted Saturday about “very welcome support for the resumption of live sport incl horseracing” from Culture Secretary Oliver Dowden, linking to a front page report from The Sun newspaper about plans for events to be staged again.

Dowden updated legislators earlier this week on his talks with sports governing bodies.

Despite high-profile reversals by Liverpool and Tottenham, Norwich has defended its decision to place some non-playing staff on furlough during the coronavirus outbreak.

The Canaries are one of only two English Premier League clubs using the scheme. Employees receive 80% of wages from the British government up to 2,500 pounds ($3,000) although, in this instance, Norwich is making up the remaining 20%.

Newcastle is the other top-flight club to turn to the job retention program while Liverpool, Tottenham and Bournemouth made U-turns on their decisions to furlough staff following heavy criticism.

“The decision we made was in the best interests of the club and its staff. We’ve been very transparent that we’re run in a self-financed manner," Norwich chief operating officer Ben Kensell told BBC Radio Norfolk. "Ultimately, if we had the available cash flow to not have to take up schemes then, like other football clubs have, we would."

Last-place Norwich, which has nine games remaining, is reportedly budgeting for a loss of between 18-35 million pounds due to the coronavirus pandemic.