The Latest: Tennessee won't mandate vaccines in its schools 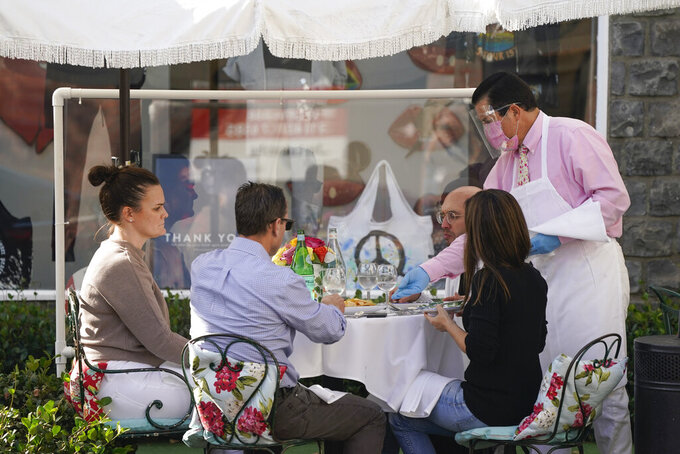 Diners are served outside by a waiter wearing a mask, face shield and rubber gloves, Wednesday, Nov. 18, 2020, in West Hollywood, Calif. Los Angeles County imposed new restrictions on businesses Tuesday and is readying plans for a mandatory curfew for all but essential workers if coronavirus cases keep spiking. (AP Photo/Ashley Landis)

NASHVILLE, Tenn. — Tennessee’s governor says that once coronavirus vaccines become available, they will be optional in the state’s K-12 public schools.

Gov. Bill Lee said Tuesday that vaccines will be very important for Tennessee to “ultimately really be able to handle” the pandemic. But he says he doesn’t foresee vaccine mandates for school districts in Tennessee.

The state’s health commissioner says the first doses could arrive in Tennessee around Dec. 15. The first wave will be reserved for frontline health care workers and first responders. She says widespread availability would likely be in late spring or early summer.

— Millions in US stick to Thanksgiving travel plans despite CDC warnings.

— Keep the mask: A vaccine won’t end the US crisis right away.

— Just in time for December holidays, England to cut its mandatory 14-day quarantines for travelers from unsafe virus countries to as little as five days with testing regimen.

— Los Angeles on the brink of a stay-home order as coronavirus cases rise.

EL PASO, Texas — Officials in El Paso County in Texas plan to impose a new curfew in hopes of combatting a surge in coronavirus cases that is overrunning the border area’s hospitals and funeral homes.

El Paso County Judge Ricardo Samaniego has said Gov. Greg Abbott’s office has approved the curfew. In a letter sent last week to Abbott, Samaniego said the curfew would be limited in nature and would not interfere with people seeking to access essential or nonessential services.

The county judge and state officials have been at odds over Samaniego’s efforts to implement rules to slow the virus’ spread in the border city of El Paso.

Earlier this month, an appeals court overturned an El Paso County order that would have closed nonessential businesses, including gyms and salons.

INDIANAPOLIS — Indiana has nearly recorded its most COVID-19 deaths for a single month with a week remaining as health officials on Tuesday added 103 more deaths to the state’s pandemic toll.

The Indiana State Department of Health’s daily update included the new deaths mostly occurring over the past several days through Monday, and which push November’s total to at least 991.

Indiana’s monthly high for COVID-19 deaths was 1,041 in April, when at most the state’s moving seven-day average was 42 fatalities a day. That daily average has now reached 51 as Indiana’s hospitals are treating nearly double the number of coronavirus patients as at any point since seeing their first infections in March.

Coronavirus hospitalizations have reached a level where health care leaders say the system is becoming overwhelmed and some hospitals have started rationing care to treat those most severely ill.

ATLANTA — Although White House officials are pushing Georgia to do more to slow the spread of the coronavirus, Gov. Brian Kemp said Tuesday that the responsibility rests with individual Georgians, as he implored them to take precautions over Thanksgiving.

The holiday comes at a perilous moment for the state. Although the virus is spreading more slowly in Georgia than in 40 other states, according to figures kept by The Associated Press, the number of infections is still rising rapidly and approaching the peak Georgia saw in late July.

The Republican governor repeated the same guidance he’s been giving Georgians since summer, that they should wear masks, keep their distance from others, wash their hands, and follow Kemp’s rules, including bans on large gatherings. The governor said he wasn’t planning any other measures, such as a statewide mask mandate, or renewed restrictions on businesses.

Also on Tuesday, a second member of Congress from Georgia tested positive for COVID-19.

Republican U.S. Rep. Rick Allen of Evans announced Tuesday that a test shows he has the coronavirus. Allen represents the 12th District stretching from Augusta across all or part of 19 counties.

He says he has no symptoms and will isolate at home. Republican U.S. Rep. Drew Ferguson of West Point tested positive in October after experiencing mild symptoms. U.S. Sen. Kelly Loeffler had isolated after she got a positive COVID-19 test on Friday, but has since gotten two straight negative tests.

LOS ANGELES — A California judge has rejected a request from a restaurant industry group to block the nation’s most populous county from reinstating a ban on outdoor dining, a plan the group said would devastate businesses and workers.

The new rule scheduled to take effect Wednesday would restrict restaurants, bars and other businesses in the county to takeout and delivery.

Mississippi, with a population of about 3 million, has reported more than 144,500 confirmed coronavirus cases and at least 3,729 deaths from COVID-19. Hospitalizations are rising, with 946 people hospitalized in Mississippi with coronavirus Monday, compared with 560 on Nov. 4, according to the state Department of Health.

Speaking to the Senate Public Health and Welfare Committee on Monday, Dobbs said there is no “collective will” among the public to prevent the virus.

ATLANTIC CITY, N.J. — Atlantic City’s casinos are slowly resuming live entertainment, bringing back a staple of the casino experience as they comply with government-mandated restrictions designed to slow the spread of the coronavirus.

Hard Rock on Tuesday announced a series of Motown-themed Christmas shows from Dec. 11-30, saying its customers are getting antsy with months of coronavirus restrictions.

“Public demand is looking for activities, especially with outdoor temperatures keeping everyone inside,” said Hard Rock president Joe Lupo. “The large showrooms, with better air circulation and spacious seating, and less than 10% of normal (occupancy) can provide that safe and fun night out.”

Tickets will be sold as individual tables of two and four seats to ensure social distancing.

BISMARCK, N.D. — North Dakota’s department of health has released figures showing that November has become the state's deadliest month due to complications from COVID-19.

State officials confirmed Tuesday a record high of 37 deaths in the last day, bringing the overall death toll to 883 since the start of the pandemic. There have been 317 fatalities in November, surpassing the October tally of 295.

Figures released Monday by Johns Hopkins University researchers lists North Dakota’s death count as the 39th highest in the country and the eighth highest per capita at 112 deaths per 100,000 people.

State health officials said fatality updates on Tuesday are typically higher because of lag in reporting from the weekends.

MOSCOW — Russia has released new results claiming its experimental coronavirus vaccine is highly effective and will cost less than vaccines made by some Western competitors.

Russian Direct Investment Fund, which bankrolled the development of the shot, says Sputnik V will cost less than $10 per dose — or less than $20 for the two doses needed to vaccinate one person — on international markets. The vaccine will be free for Russians. Developers of the vaccine say it was 91.4% effective, according to new trial data.

Pfizer and Moderna shots cost about $20 and $15-25 per dose respectively, based on agreements the companies have struck to supply their vaccines to the U.S. government.

Russia drew international criticism for giving Sputnik V regulatory approval before it underwent advanced testing among tens of thousands of people required to ensure its safety and effectiveness.

Russia has reported 2.1 million confirmed cases and more than 36,000 deaths, according to data from Johns Hopkins University.

Any vaccine candidate must be peer reviewed and get approval from the U.S. Food and Drug Administration.

The priority would be distribution to health care workers, followed by populations considered at high-risk for the coronavirus. The governor didn’t identify which company’s vaccine the state would receive.

Meanwhile, nearly 4,500 patients in Ohio are hospitalized with COVID-19-related symptoms. That includes more than 1,000 on intensive care units and more than 570 on ventilators, according to state Health Department data.

The seven-day rolling average of daily new cases in Ohio has risen from 4,724 cases on Nov. 9 to 8,277 on Monday, according to an Associated Press analysis of data provided by The COVID Tracking Project.

MADRID — Spain is reporting a new daily record of 537 coronavirus deaths since the resurgence of the pandemic.

Japan has experienced an uptick in infections this month, with a nationwide daily total exceeding 2,000 as the government tries to balance preventive measures and business activity.

Koike credits widespread use of masks for Japan’s lower infections compared to the United States and Europe. Tokyo topped 500 cases last week. It reported 186 new cases on Tuesday for a total of nearly 38,200.

NEW YORK — Governors and mayors are ratcheting up mask mandates and imposing restrictions on small indoor gatherings that have been blamed for accelerating the spread of the coronavirus.

Officials are banking on voluntary compliance since such measures are largely unenforceable.

Health experts say if people disregard the new state and local restrictions and socialize anyway, that could put greater stress on overburdened hospitals and lead to an even bigger spike in sickness and death after the holidays.

The nation is averaging 172,000 new virus cases per day, nearly double since the end of October, according to data from Johns Hopkins University.

The U.S. leads the world with 12.4 million cases and nearly 258,000 confirmed deaths since the start of the pandemic.

OMAHA, Neb. — The number of people hospitalized with coronavirus in Nebraska remains near record levels, but the total has remained relatively the past week.

The state says 971 people were hospitalized with the virus on Monday. Over the past week, that figure has gone up and down between a low of 961 last Wednesday and Friday’s record of 987.

GUILFORD, Maine — A Maine medical supply manufacturer has been awarded more than $11 million from the federal government to produce millions of additional testing swabs.

The White House in June said the federal government was providing more than $75 million for Puritan to double its production to 40 million swabs per month.

The company’s total production is at least 90 million per month now, Collins says.

The state has reported nearly 10,800 cases and 189 confirmed deaths since the start of the pandemic.

Health Minister Salvador Illa says Spain has signed agreements with five vaccine producers and hopes to do so with two more. Once the vaccines are approved by the European Medicines Agency, Spain hopes to receive 140 million doses.

Given most vaccines will involve two doses, he says this should be enough to vaccinate some 80 million people and cover any possible problems with some vaccines.

Spain, with a population of 47 million, intends to give vaccines for free and provide the excess vaccines to countries outside the European Union that need them, Illa says.

The government hopes to vaccinate some 2.5 million people in the first stage between January and March and the rest of the population by mid-year. The vaccinations will be given in Spain’s 13,000 public health centers.

Spain has reported more than 1.5 million cases and more than 43,000 confirmed deaths.