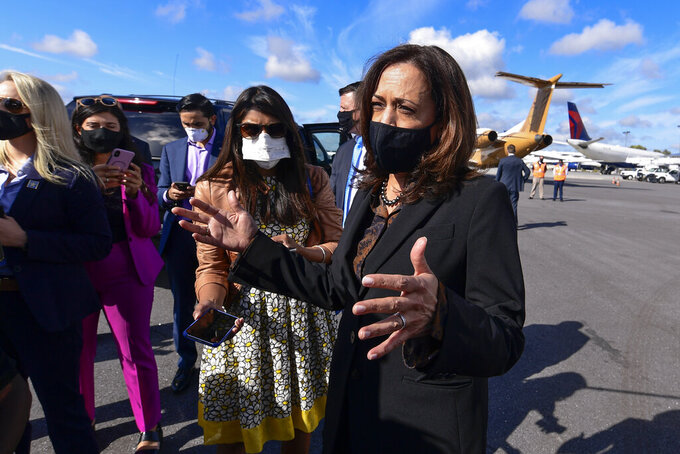 President Donald Trump says he thinks Sacha Baron Cohen, the comedian behind the “Borat” films, is “a creep.”

Trump told reporters aboard Air Force One on Friday night that he didn’t know what happened with Giuliani.

“But, you know, years ago he tried to scam me,” Trump said of Baron Cohen. “And I was the only one that said, ‘No way. This guy is a phony guy.’”

Trump appeared briefly on HBO’s “Da Ali G Show” in 2003, but walked away from an interview with Baron Cohen’s Ali G character after just a minute.

One scene in Baron Cohen’s new movie scene shows Giuliani on a bed, tucking in his shirt with his hand down his pants after the woman helps him remove recording equipment. Giuliani called the scene “a hit job” and said he realized he was being set up.

President Donald Trump is trying to keep the focus on Democrat Joe Biden's comments in the final presidential debate about supporting a “transition” away from oil in favor of renewable energy.

Trump, making a campaign swing through Florida on Friday, reveled in Biden’s remarks, saying voters in Texas, Pennsylvania and other states wouldn’t like them.

The Biden campaign released a statement hours after Thursday's debate declaring that the Democratic nominee would phase out taxpayer subsidies for fossil fuel companies, not the industry altogether.

Trump also played for supporters a video of various comments that Biden has made on fracking in a bid to make him look like he opposes it. Biden’s position is that he does not support new fracking on federal lands. Most fracking occurs on private land.

Trump talked extensively about Thursday night’s debate in his Florida rallies. He said Biden “looked like he made it. It looked like it was going to be OK. He got off the stage, going back to his basement and then they hit him with the energy question. They hit him with a thing called oil.”

President Donald Trump and his Democratic challenger, Joe Biden, are framing their closing messages in the sprint to Nov. 3. Biden spoke in Delaware on Friday on his plans to beat COVID-19 and get the economy back on track. Trump is traveling to Florida for rallies in The Villages and Pensacola.

— Vision 2020: What happens if the US election is contested?

— Analysis: Debate is brief interlude of normalcy in 2020 race

— Final Trump-Biden debate is marked by clashes but less chaos

Kamala Harris says President Donald Trump has a “weird obsession” with rolling back everything former President Barack Obama did in office.

The Democratic vice presidential nominee said at a drive-in rally in Atlanta on Friday that scrapping the 2010 health care law dubbed “Obamacare” is at the top of Trump’s wish list but that he’s also driven to damage the legacy of the first Black man to serve as president of the United States.

Harris is urging Black voters to show up for Biden in Georgia, an emerging battleground state where a growing, diversifying electorate could help Democrats dent decades of Republican dominance. Harris campaigned alongside Democrats running for two U.S. Senate seats, Jon Ossoff and the Rev. Raphael Warnock.

Harris visited a mural of the late civil rights icon John Lewis before leaving Atlanta. She called him “a wonderful friend and a mentor to me” and said she hopes “to live up to everything he expected of all of us.”

Joe Biden has long accused the Trump administration of giving up on the coronavirus pandemic, but he is getting more aggressive, arguing that the president actively encouraged its spread.

Seeking to keep the focus of the presidential race on a health crisis that has killed more than 220,000 Americans, Biden said Friday of President Donald Trump, “It was as if he decided to go on the offense for the virus.”

The Democratic presidential nominee noted that Trump held large, non-socially distanced and maskless rallies nationwide, even “inviting the virus into the White House” by taking a relaxed approach to the most basic of precautions.

In a speech in Delaware, Biden promised, if elected, to use his transition period to the White House to contact every governor, as well as local officials, to determine their pandemic-fighting needs.

He said he’d ask governors for a universal mask-wearing requirement and, if they refuse, bypass them to local officials.

Biden also said he’d ask Congress to approve a spending bill to combat the virus and its economic fallout by Jan. 30, a mere 10 days after Inauguration Day.

Kamala Harris is defending her record as a prosecutor and promising that a Joe Biden White House would push to “decriminalize marijuana” and “expunge” the records of Americans convicted under current federal laws.

The Democratic vice presidential candidate campaigned Friday in Atlanta with a focus on Black voters who will prove pivotal in deciding the outcome in Georgia and other battleground states.

She told a roundtable of Black men that she and Biden understand the barriers Black men face, including the U.S. criminal justice system. She said she discussed the matter, including drug laws, with rapper Killer Mike during a private meeting earlier Friday.

And she offered a spirited defense of her record when another musician, rapper and producer, Jermaine Dupri, asked her to address her history of “putting a lot of Black brothers away.”

Harris said she chose to be a prosecutor to “reform the system” from within, comparing her career path to “going up the rough side of the mountain.” She recounted prosecuting cases for crimes of sexual violence and human trafficking and that “people went to jail” but she framed her efforts more as making changes to steer defendants away from prison.

And she pushed back at the notion of Black prosecutors having to answer for a “flawed” system because “it suggests Black people shouldn’t be prosecutors.”

But she also said while campaigning in Atlanta on Friday that she’s not “going to tell Black men they have to vote for us.” The California senator said, “We have to earn that vote.”

Harris told a roundtable of Black men that the Democratic ticket “is committed” to expanding economic and educational opportunities for Black Americans and overhauling the nation’s criminal justice system.

Harris said Black entrepreneurs “don’t lack for creative ideas” but have too little access to capital.

In a separate event with Black college students, Harris vouched for Biden as someone who “has the ability to speak the words ‘Black Lives Matter’ in a way that other fella does not.”

Only later did she call President Donald Trump by name, blasting him as having a “weird obsession” with overturning any accomplishment of his predecessor, former President Barack Obama.

President Donald Trump is reviewing his debate against Democrat Joe Biden, saying he thought it went “really well” and was an “exciting night.”

The Republican president and the Democratic former vice president squared off Thursday in their final head-to-head matchup before the Nov. 3 election. The debate in Tennessee offered more substantive discussion of issues and was lighter on the types of sometimes intense personal clashes that dominated their first meeting in late September.

Addressing reporters in the Oval Office on Friday, Trump says his more straightforward performance “was a more popular way of doing it.”

Trump says he wanted to play by the rules on Thursday although he liked his more aggressive tone in that first debate.

Sen. Kamala Harris is clarifying Joe Biden’s comments during the last presidential debate about transitioning away from the oil industry, saying he won’t ban the oil extraction technique called fracking.

Speaking to reporters in Atlanta on Friday, Biden’s running mate said he will “deal with the oil subsidies.”

Republicans have launched a barrage of attacks on the issue.

Biden was asked during Thursday’s debate with President Donald Trump in Tennessee if there would be “any place for fossil fuels, including coal and fracking, in a Biden administration.” The Democrat offered a muddled response, initially saying he would transition away from oil, before clarifying he’d eliminate federal subsidies for the industry.

Biden’s climate plan calls for achieving net-zero carbon emissions in part through nixing subsidies, which would have implications for fracking. Biden also has proposed a ban on new gas and oil permits on federal lands but not a full fracking ban.

Republicans seized on Biden’s answer to again claim that his policies would have damaging implications for the oil and gas industry.

Harris dismisses those attacks, saying Trump “likes to take everything out of context.”