The Latest: Trump to establish 'National Garden' of heroes 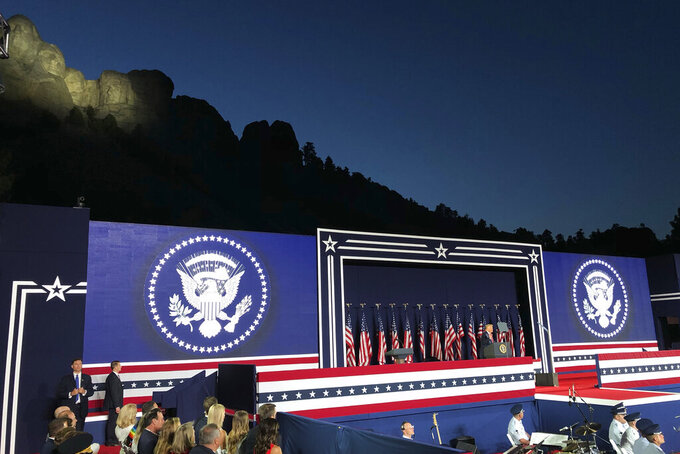 President Donald Trump says he will establish a “National Garden of American Heroes,” which he is describing as “a vast outdoor park that will feature the statues of the greatest Americans who ever lived.”

Trump made the announcement as he opened the Fourth of July weekend with a speech and fireworks at the iconic Mount Rushmore.

He led into the announcement by paying tribute to a litany of American icons, from political figures like Ulysses S. Grant and Frederick Douglass to entertainers like Elvis Presley and Frank Sinatra.

The executive order released Friday by the White House says the garden will feature statues of several presidents as well as other historic notables, including Davy Crockett, Amelia Earhart, Billy Graham, Harriet Tubman and Orville and Wilbur Wright.

Sergio Gor, chief of staff to the Trump campaign’s finance committee, says Guilfoyle was immediately isolated after the positive result to limit exposure. He says she will be retested to confirm the diagnosis because she isn’t showing any symptoms of COVID-19, the disease the virus causes. Gor says Guilfoyle is doing well and canceling her public events.

Gor says Donald Trump Jr. tested negative but is self-isolating as a precaution. He is also canceling his public events.

The couple was in South Dakota to hold fundraisers for Trump’s reelection. Trump is giving a pre-Fourth of July speech at Mount Rushmore in South Dakota.

Nor was there any evidence of social distancing in the tightly packed audience assembled for Trump’s speech and a fireworks display.

Trump did offer thanks to “the doctors, nurses and scientists working tirelessly to kill the virus.”

Republican Gov. Kristi Noem, a Trump ally, had said social distancing wouldn’t be required during the event and masks would be optional. Event organizers were to provide masks to anyone who wanted them and planned to screen attendees for symptoms of COVID-19.

Many parades and fireworks displays across the nation were canceled over the holiday weekend, with confirmed cases climbing in 40 states. The U.S. saw 52,300 newly reported cases Friday, according to the tally kept by Johns Hopkins University.

Ivanka Trump, the president’s daughter, put out a tweet Friday night urging Americans to “Practice proper hygiene, social distancing & wear a mask when in close proximity to others.”

President Donald Trump is accusing activists who want to remove monuments to American leaders of conducting “a merciless campaign to wipe out our history, defame our heroes, erase our values and indoctrinate our children.”

The White House provided excerpts of Trump’s remarks before he was to deliver them at Mount Rushmore Friday night.

Trump says, “This movement is openly attacking the legacies of every person on Mount Rushmore.”

Trump says, “Those who seek to erase our heritage want Americans to forget our pride and our great dignity, so that we can no longer understand ourselves or America’s destiny.”

He says protesters who have called for the removal of statues “seek to dissolve the bonds of love and loyalty that we feel for our country, and for each other.”

Trump did not explicitly mention statues of Confederate leaders, though he previously has criticized taking down Confederate symbols. Dozens of the statues removed in response to racial injustice protests in recent weeks have been tied to the Confederacy.

About 15 protesters were arrested after a demonstration that blocked the main road into Mount Rushmore ahead of President Donald Trump’s arrival for a Fourth of July fireworks show.

More than 100 protesters, many Native American, lined the road leading from Keystone, South Dakota, to the monument on Friday, holding signs and playing Lakota music in 95-degree heat. Some held their fists in the air as cars loaded with event attendees passed by. Others held signs that read “Protect SoDak’s First People,” “You Are On Stolen Land” and “Dismantle White Supremacy.”

Protesters barricaded the road with vans, prompting police and National Guard soldiers to move in. A standoff ensued, with police using pepper spray on several protesters but taking no further action for several hours.

Police finally used tow trucks to remove the vans and gave the demonstrators 30 minutes to leave. All but a group of about 15 people holding a banner that read “Land Back” left. When the deadline arrived they were arrested without incident, turning and putting their hands behind their backs to be cuffed.

The protest wouldn’t have stopped Trump from arriving. He was scheduled to touch down near the monument in a helicopter.

President Donald Trump has arrived in South Dakota to get a head start on Independence Day weekend with a fireworks show at Mount Rushmore.

Trump planned to give a speech at the national monument Friday night. A person familiar with its contents described it as “fiery” — including fresh denunciations of people the president says are trying to “tear down” the nation’s history.

Trump has forcefully opposed efforts by protesters as well as by government officials to remove Confederate statues, monuments and other honors for American leaders who benefited from slavery.

Native Americans protested Trump’s presence at the monument, which was carved into mountains they consider sacred.

Some South Dakota officials are concerned about the absence of social distancing requirements — including wearing face coverings — for the thousands of people expected to attend.

Others are concerned that wildfires could be sparked by the first fireworks show at Mount Rushmore since 2009.

Tow trucks are removing vans that protesters parked on the main road into Mount Rushmore to block access to the monument ahead of President Donald Trump’s arrival for a Fourth of July fireworks show.

More than 100 demonstrators, mostly Native Americans, lined the road leading from Keystone, South Dakota, to the monument on Friday, holding signs that read “Protect SoDak’s First People” and “You Are On Stolen Land.”

Protesters barricaded the road with vans, prompting police and National Guard troops to move in. A standoff ensued, with police using pepper spray on several protesters but taking no further action.

After nearly two hours the crowd began to dwindle and police advanced past the vans as the remaining protesters retreated down the road. Tow trucks pulled up behind the officers and troops to remove the vans.

Trump was expected to arrive at the monument by helicopter.

Protesters blocked the main road into Mount Rushmore ahead of President Donald Trump’s arrival Friday for a Fourth of July fireworks show.

More than 100 protesters, mostly Native Americans, lined the road leading from Keystone, South Dakota, to the monument, holding signs and playing Lakota music in 95-degree heat. Some held their fists in the air as cars loaded with event attendees passed by. Others held signs that read “Protect SoDak’s First People,” “You Are On Stolen Land” and “Dismantle White Supremacy.”

Protesters used vans to barricade the road. Police wearing riot gear and holding shields moved in on the protesters from both sides and warned them to disperse but took no further action.

Most of the fireworks show attendees had already arrived before protesters blockaded the road. Trump’s schedule indicates he will arrive at the monument by helicopter.

This story was first published on July 3, 2020. It was updated on July 6, 2019, to clarify that President Donald Trump did not explicitly mention monuments to Confederate generals in his speech at Mount Rushmore.