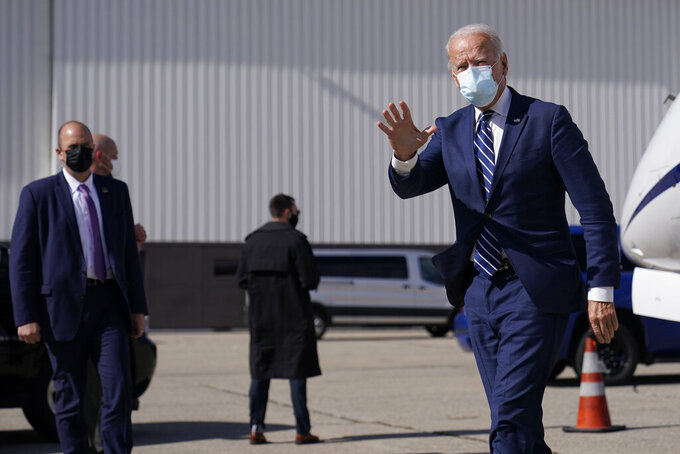 WASHINGTON (AP) — The latest on the presidential campaign (all times local):

President Donald Trump says he “could be the world’s greatest fundraiser,” but he doesn’t want to put in the work or have to “do things” in return for his donors.

Trump claimed to thousands of supporters at a rally Friday in Macon, Georgia, that he could easily get multimillion-dollar donations from the heads of Wall Street firms.

But he says he’d then have “do things for them” in return.

The president spoke after his campaign released new numbers suggesting he’s likely the first president to face a financial disadvantage in the modern era.

President Donald Trump is holding rallies in Ocala, Florida, and Macon, Georgia, on Friday night. His Democratic challenger, Joe Biden, is in Michigan, where he is talking about health care in Southfield and mobilizing voters in Detroit.

Joe Biden is promising a sweeping effort for racial and economic justice if he’s elected president.

The Democratic presidential nominee said Thursday at a drive-in rally at the Michigan State Fairgrounds that President Donald Trump has encouraged a rise of white supremacy, armed militias and bitter divisions.

Biden says he’d lead emphasizing unity while acknowledging systemic racism. He praised Black Americans especially for “a deep love of this country that for far too long” has not fully recognized generations of oppression.

The former vice president promised an economic program that would boost opportunities for American workers of all races and ethnicities. After hailing the U.S. auto industry that is concentrated in Michigan, he says he wants a manufacturing renaissance to “make it in America, make it in Michigan.”

Michigan Sen. Gary Peters is playing up Democratic presidential candidate Joe Biden as a savior of the U.S. auto industry.

The senator, who faces his own tough reelection campaign, was among the warmup speakers at a Biden campaign drive-in rally Friday at the Michigan State Fairgrounds.

Peters says Michigan should “thank President Obama and Vice President Biden” for their role in bailing out automakers after the 2008 financial collapse.

The bailout for GM and Chrysler was authorized by President George W. Bush after Obama and Biden won the 2008 election but before they took office. The Obama administration carried out the rescue program.

President Donald Trump is predicting a “red wave” of Republican voting in Florida.

Most polls show a close race in the important battleground state that both the Republican incumbent and Democrat Joe Biden are courting heavily.

Addressing a campaign rally Friday in Ocala, Trump reminded thousands of supporters that “I live here, too.” He recently switched his legal residence from New York.

Trump predicted a “red wave” of Republican voting, “the likes of which they’ve never seen before.”

Campaigning outside Detroit on Friday, the Democratic nominee said Trump promises to protect the insurance eligibility of all Americans but in reality wants to scrap the 2010 Affordable Care Act. That law for the first time set a federal standard that requires insurers to offer health insurance to customers regardless of their health history.

Biden says Trump “can only see from his penthouse” in Manhattan and doesn’t see most Americans’ daily struggles.

A 2017 study from the Department of Health and Human Services found that as many as 133 million Americans could be defined as having a “preexisting” condition by the standards insurers used before the 2010 law.

Biden noted that the number could rise in the wake of the pandemic. Some patients who recover from COVID-19 have been found with lingering lung, heart or other organ damage.

Joe Biden is mocking President Donald Trump for suggesting in a Thursday town hall that the U.S. has “turned the corner” in the fight against the coronavirus pandemic.

Biden said Friday while campaigning in Southfield, Michigan, that the virus is “not disappearing” and is instead “on the rise again.”

The Democratic nominee noted a COVID-19 uptick in many states and said Trump has put the U.S. on course to have more coronavirus deaths than combat deaths in World War II.

Biden said Trump “puts his supporters in such jeopardy” by holding mass rallies where masks are not required. Biden had removed his own mask to speak Friday. But he spoke in front of a small, masked crowd spread out across a community center gymnasium floor.

He asked them to recall Trump repeatedly “making fun of Biden wearing a mask.”

Biden has built much of his general election argument around the criticism that Trump has bungled the pandemic and its economic fallout, leading to more deaths and job losses.

Democratic presidential candidate Joe Biden is heaping praise on leading Michigan Democrats as he tries to flip the state back his party’s presidential win column.

Biden praised Gov. Gretchen Whitmer on Friday as one of the nation’s best governors and said she “stands up straight and tall.” He again blasted President Donald Trump for not explicitly condemning white supremacists and far-right anarchists like the group recently arrested for plotting to kidnap Whitmer.

The former vice president also heaped praise on Sen. Gary Peters as the Democrat faces a stiff challenge from Republican John James. Democrats cannot afford to lose Peters’ seat if they hope to have a working Senate majority in January.

Biden called Peters a “go-to” lawmaker for the Obama administration when Biden was vice president.

The tests come a day after the campaign confirmed three individuals connected to the campaign had tested positive, including Harris’ communications director Liz Allen.

As a precaution, Harris has suspended in-person campaigning through the weekend, but plans to return Monday. Biden is continuing to campaign, with two stops Friday in Michigan.

Medical advisers to the campaign said none of the individuals who tested positive were ever close enough to Biden to directly expose him to the virus.

President Donald Trump and Democratic nominee Joe Biden will face questions on the coronavirus, race issues and climate change in the final presidential debate next week.

Moderator Kristen Welker of NBC released the six topics for the debate Friday through the nonpartisan Commission on Presidential Debates. They are “Fighting COVID-19,” “American Families,” “Race in America,” “Climate Change,” “National Security,” and “Leadership.”

Trump and Biden will take the stage together for 90 minutes on Oct. 22 in Nashville, three weeks after their first meeting in Cleveland.

A second outing planned for Oct. 15 was called off after Trump’s coronavirus diagnosis and his refusal to participate in a virtual debate. Trump and Biden held town halls on different networks at the same time instead.

Trump is making a direct appeal to older voters during a Friday appearance in Fort Myers, Florida. Polls have shown that Trump’s support among this voting bloc has slipped partly because of his uneven handling of the coronavirus pandemic, which has killed more people in the United States than in any other country. Older people are among the groups most vulnerable to the COVID-19 disease it causes.

Trump says in the speech: “I will protect you, I will defend you, and I will fight for you with every ounce of energy and conviction that I have.”

The president is also assuring older people that they will be first in line for a vaccine when one is approved. He adds that he will provide them with treatments like those he received at no cost.

Trump recently recovered from COVID-19 and spent three days in the hospital.