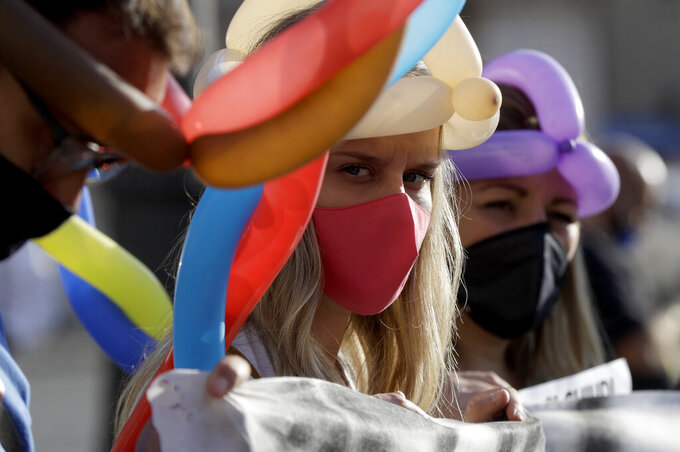 Disco and dance club operators stage a protest against government's order for them to close in order to curb the spread of coronavirus, in Rome Thursday, Oct. 22, 2020. Authorities in regions including Italy's three largest cities have imposed curfews in a bid to slow the spread of COVID-19 where it first struck hard in Europe, most of whose countries are now imposing, or mulling, new restrictions to cope with rapidly rising caseloads. (AP Photo/Gregorio Borgia)

UNITED NATIONS — The U.N. chief says it’s “very frustrating” that leaders of the 20 major industrialized nations didn’t come together in March and establish a coordinated response to grapple with the coronavirus in all countries as he proposed.

The result, he says, is every country is taking its own sometimes contradictory actions, and the virus is moving “from east to west, north to south,” with second waves of infections now affecting many countries.

Ahead of the Group of 20 summit next month, Secretary-General Antonio Guterres said in an interview with The Associated Press that he hopes the international community now understands “they need to be much more coordinated in fighting the virus.”

Guterres says the United Nations also will be “strongly advocating” during the G-20 summit for a guarantee that when a vaccine is available, “it becomes indeed available and affordable for everyone, everywhere.”

— France extends curfew to 38 regions because of coronavirus surge

— Britain offering financial help for bars, pubs and restaurants struggling because of restrictions due to the coronavirus.

— Photographer in Dubai providing free photo shoots to laid-off expats forced to leave the skyscraper-studded Persian Gulf city because of the pandemic.

SEOUL, South Korea -- South Korea has reported 155 new confirmed cases of the coronavirus, its highest daily jump in more than 40 days as officials struggle to stem transmissions at hospitals and nursing homes.

The figures announced Friday brought the national caseload to 25,698, including 455 deaths. Officials say most of the new cases were local transmissions and primarily in the Seoul region, where hundreds of infections have been tied to a handful of hospitals and nursing homes.

A nursing home in Namyangju, east of Seoul, has emerged as the latest cluster of infections, with officials putting the facility under isolation after more than 30 workers and residents tested positive. Around 120 infections have been linked to a hospital in nearby Gwangju.

Friday’s daily jump was the highest since Sept. 11 when 176 new infections were reported.

BOISE, Idaho — A regional health board in northern Idaho has voted narrowly to repeal a local mask mandate, acting moments after hearing how the region’s hospital has been overwhelmed with COVID-19 patients and is looking at sending people as far away as Seattle for care.

The board heard Thursday that the hospital in Coeur d’Alene reached 99% capacity the previous day, even after doubling up patients in rooms and buying more beds. The board in Kootenai County then voted 4-3 to end the mask mandate. Kootenai is the third most populous county in conservative Idaho.

Gov. Brad Little has left it up to local health departments and school districts to decide on what restrictions, if any, are needed for the coronavirus pandemic.

SEATTLE — Health officials in Washington state say the number of people in the state who have been confirmed with coronavirus infections during the pandemic has surpassed 100,000.

The Department of Health reported 651 new virus cases and three new COVID-19 deaths Thursday. The latest numbers increased the state’s confirmed cases to 100,525 and the total number of people who have died to 2,289.

Inslee says cases are on the rise again in Washington, and he urges people to have fewer and shorter interactions with others.

AUSTIN, Texas — Texas Gov. Greg Abbott is sending more medical reinforcements to the El Paso area in response to a surge of coronavirus infections and cases of COVID-19, the illness the virus can cause.

The Texas Department of State Health Services and the Texas Division of Emergency Management will provide more medical personnel and equipment this week.

The move comes during the same week that El Paso County reported 3,750 new coronavirus infections, including 1,161 on Thursday. That number accounts for 17.5% of the 21,321 cases reported this week by the state’s 254 counties.

Active coronavirus cases in El Paso rose 864 Thursday to 9,569. The 558 confirmed COVID-19 patients hospitalized in El Paso, Culberson and Hudspeth counties account for more than one-third of all of that region’s hospitalized patients

HELENA, Mont. — Montana Gov. Steve Bullock says the state health department is pursuing legal action against several businesses in northwestern Montana for not following a mask mandate and other restrictions meant to prevent the spread of the coronavirus.

The announcement came Thursday as the state reported 932 newly confirmed coronavirus cases. That was far above the previous one-day high of 734.

The new cases include 173 in Yellowstone County and 112 in Flathead County, where the governor says businesses face legal action.

State officials also have launched a new website to allow people to submit complaints against businesses and events that are not complying with health directives.

ROSWELL, N.M. -- Officials at a military junior college in New Mexico say the school is under quarantine after more than 60 cadets and employees tested positive for the coronavirus. Those who tested positive are being kept isolated.

The quarantine at the New Mexico Military Institute is expected to last until Oct. 29. Parents will be allowed to visit only in special situations or emergencies, and officials say all campus facilities are being closed to the public for five weeks.

The closure comes as the state struggles with a surge in coronavirus infections. Wednesday marked another record day for daily confirmed cases, with 827, and state health officials reported an additional 669 cases Thursday. That brings the statewide total to nearly 39,380 since the pandemic began.

BATON ROUGE, La. — Louisiana will allow more high school football fans to attend games in open-air stadiums beginning Friday if the events are in parishes with low numbers of coronavirus cases in the last few weeks.

Gov. John Bel Edwards said Thursday that stadiums will be allowed to have crowds at 50% capacity in parishes where 5% or less of coronavirus tests have come back positive in the previous two weeks. Stadiums have been capped at 25% capacity.

The governor says 26 of Louisiana’s 64 parishes meet the criteria to boost crowd size.

MONTGOMERY, Ala. — Alabama Lt. Gov. Will Ainsworth said Thursday that he remains opposed to mandatory mask orders despite being diagnosed with COVID-19, even though he encourages people to wear one.

The Republican lieutenant governor announced Wednesday that he tested positive for the coronavirus. He said he sought a test after learning someone in his Sunday school group had COVID-19.

“I have always encouraged mask-wearing, and I wear one in my daily life, Ainsworth said in a statement, adding that: “At the same time, I believe in personal responsibility and think everyone has the right to make their own choices regarding their health.”

The state will not backtrack to reexamine the more than 16,000 deaths attributed to the virus, but rather take a closer look at deaths going forward, said Fred Piccolo, a spokesman for Republican Gov. Ron DeSantis, speaking Thursday.

And the state won’t immediately discount those who tested positive for coronavirus and died weeks afterwards, recognizing the virus may have caused damage that contributed to the death, he added.

Florida reported more than 5,500 new COVID-19 cases Thursday, raising the seven-day average in daily reported cases to about 3,300. That’s about 1,000 more per day since the beginning of the month.

SIOUX FALLS, S.D. — Gov. Kristi Noem has insisted South Dakota is excelling in its handling of the pandemic, although the state surpassed 9,000 active coronavirus cases and matched an all-time high for deaths reported in a day.

The state ranks second in the country in new infections per capita over the last two weeks, according to Johns Hopkins University data. There were about 1,036 new cases per 100,000 people in South Dakota, meaning that about one in every 97 people in the state has tested positive for the virus in the last two weeks. Health officials on Thursday also reported an all-time high of 973 new cases.

But the Republican governor has used her refusal to issue government mandates to vault to nationwide relevance among conservatives. She told Fox News on Wednesday night, “We’re doing really good in South Dakota. We’re managing COVID-19, but also our economy is thriving.”

CHICAGO — Some Chicago businesses will have to close by 10 p.m. and residents are asked to limit gatherings to six people as the number of newly confirmed coronavirus cases among residents continues to rise, the city’s mayor announced Thursday.

All of the changes take effect Friday.

Lightfoot warned earlier this week that rising numbers of new confirmed cases could lead to reinstated restrictions on the city’s economy. As of Thursday, Lightfoot said the city was reporting an average of 645 new cases during the past seven days.

COLORADO SPRINGS, Colo. — A federal judge has exempted two churches in Colorado from safety guidelines intended to limit the spread of COVID-19.

The Gazette reports that Denver Bible Church in Wheat Ridge and Community Baptist Church in Brighton filed a complaint in August, challenging the state’s mandate on wearing masks and its limitations on indoor gatherings.

Both churches argued that the health orders “restrict or prevent religious speech.”

The Colorado attorney general’s office filed Monday an emergency motion for a stay, or suspension of the injunction, pending the outcome of an appeal. The decision is now up to the 10th Circuit Court of Appeals.

BISMARCK, N.D. — North Dakota remained as one of the worst spots in the nation for coronavirus spread on Thursday, with health officials reporting a record day of new infections.

Gov. Doug Burgum has resisted issuing an order to require a statewide mask mandate. Leaders in Fargo and Minot this week moved to require face coverings in most settings, though the mandates are not enforced. Leaders in Bismarck are considering a similar mandate next week.

MISSION, Kan. — The coronavirus positivity rate in Kansas has topped 20%, among the highest in the country.

The 14-day rolling average of the positivity rate in Kansas rose from 15.04% on Oct. 7 to 20.64% on Wednesday, according to data from The COVID Tracking Project.

The seven-day average for new cases was a record 757 on Wednesday, with many cases in rural parts of the state.

More than 90 of the state’s 105 counties have opted out of Democratic Gov. Laura Kelly’s mask order. She plans to speak with House and Senate leadership to work toward a bipartisan mask requirement with more teeth.

Some lawmakers have resisted imposing statewide restrictions, wanting the decisions left to local officials. Kelly says there will be legislative challenges, but the research is clear: Masks work.