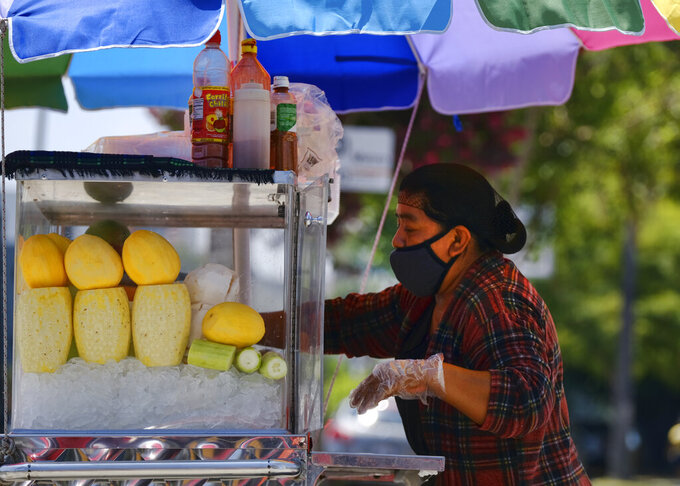 A masked fruit vendor prepares her streetside cart while waiting for customers near downtown Los Angeles on Wednesday, Aug. 5, 2020. California lawmakers are considering requiring employers to notify workers and public health officials about positive COVID-19 cases in the workplace. Violators could be charged with a misdemeanor and assessed a fine of up to $10,000. Supporters say the bill is necessary to protect workers. But business groups say the bill is so vague it will be impossible to comply with. (AP Photo/Richard Vogel)

UNITED NATIONS — The United Nations’ counterterrorism chief says a 350% increase in phishing websites was reported in the first quarter of the year and many of them targeted hospitals and health care systems, hindering their response to the coronavirus pandemic.

Vladimir Voronkov told the U.N. Security Council on Thursday that the upsurge in phishing sites was part of “a significant rise in cybercrime in recent months.” He said global experts don’t yet fully understand “the impact and consequences of the pandemic on global peace and security, and more specifically on organized crime and terrorism.”

Voronkov also warned that extremists are taking advantage of the disruption and economic hardship brought by the pandemic to spread fear and division while trying to recruit followers.

— Congressional negotiations on a huge COVID-19 relief package is still ongoing. Leaders are fast approaching a self-imposed Friday deadline for an agreement.

— A newsletter that updates residents of Portsmouth, New Hampshire, about the coronavirus pandemic is moving some readers to tears, thanks to weekly contributions from the city’s poet laureate.

MELBOURNE, Australia — The chief health officer for Australia’s Victoria state says the coronavirus infection rate in the hard-hit state has been “relatively flat” in the past week.

Victoria registered 450 newly confirmed cases and 11 deaths Friday. The 24-hour case load was down from a record 725 infections reported a week earlier. Chief Health Officer Brett Sutton described the latest tally as “reasonable,” adding that “we’re kind of sitting at 400 to 500 cases a day” over the past week.

Melbourne University epidemiologist Tony Blakely says mandatory mask wearing has started curbing the coronavirus spread. He says the infection rate began to plateau at the end of July, a week after Melbourne residents risked fines if they left home without a mask.

A six-week lockdown order took effect Thursday in the city.

COLUMBUS, Ohio — Ohio Gov. Mike DeWine is tweeting that has tested negative for a coronavirus infection after testing positive earlier Thursday before he was to meet with President Donald Trump.

The governor’s office says he took the first test as part of standard protocol before meeting Trump at an airport in Cleveland. He had planned to join the president on a visit to the Whirlpool Corp. plant in northwest Ohio.

DeWine has no symptoms but returned to Columbus before Trump landed.

The governor then returned to his home in Cedarville to quarantine for 14 days, but he tweeted Thursday night that he and his wife, Fran, had tested negative.

BEIJING — China’s capital is reporting its first new case of locally transmitted COVID-19 in a week. State media said Friday the case in Beijing is linked to a recent outbreak in the northern port city of Dalian. Beijing has registered only a few scattered new cases since containing a June outbreak linked to a wholesale food market.

China’s northwestern region of Xinjiang has 26 new cases as authorities continue to fight to curb an outbreak through travel restrictions and the lockdown of some residential areas.

The semi-autonomous city of Hong Kong reports 95 new cases and three additional fatalities reported. The city of 7.5 million people has restricted indoor dining and require faces masks to be worn in all public places.

MEXICO CITY — Mexico has jumped above 50,000 dead from the coronavirus with the latest daily report of 819 newly confirmed deaths.

The report from the Health Department on Thursday brought the country’s accumulated death toll to 50,517. That is the third-highest death toll in the world, behind only the United States and Brazil.

Authorities concede the death and case numbers are significant undercounts, in part due to Mexico’s extremely low level of testing. Mexico has performed only about 1,050,000 tests to date, far less than one for every 100 residents.

TOPEKA, Kan. — A spokesman for Kansas Gov. Laura Kelly says the governor will get a coronavirus test because she met with the speaker of the state House of Representatives who tested positive for an infection last month.

House Speaker Ron Ryckman Jr. is the highest-ranking Kansas official known to have been infected. He notified fellow House Republicans in a letter after Tuesday’s primary, saying he had been hospitalized for a week in July but is “on the road to recovery.”

Ryckman says he tested positive July 13 and he began experiencing symptoms that led to his short hospitalization. He says he no longer was contagious when he attended a public meeting with other legislative leaders and Kelly on July 29.

A lawyer tells the San Francisco Chronicle that nearly two dozen inmates and staff members have tested positive for COVID-19 at the Mesa Verde Detention Center in Bakersfield.

The judge says ICE has deliberately avoided universal testing out of concern that the agency would have to implement troublesome safety measures.

The Chronicle says ICE didn’t immediately respond to a request for comment.

JOHANNESBURG — South Africa is reporting more than 8,300 new confirmed coronavirus cases as the country with the world’s fifth largest caseload is approaching 10,000 deaths.

The new health ministry figures push the total cases on the African continent past the 1 million mark.

South Africa has more than half the virus cases in Africa, with 529,877.

Health Minister Zweli Mkhize this week expressed cautious optimism as the rate of new cases has slowed. But he warned that vigilance must continue “to prevent a renewed surge.”

SALT LAKE CITY -- Utah will no longer recommend that schools allow students who have been exposed to the coronavirus to come to class following pushback from doctors and educators.

The state issued a new recommendation Thursday that any student or teacher who has come into close contact with a confirmed case should quarantine at home for 14 days.

The change in guidelines comes one week after Gov. Gary Herbert and health officials announced a modified quarantine option that would have allowed exposed students without symptoms to attend school.

Herbert also announced Thursday that the process for implementing mask mandates at the local level will be further streamlined and no longer require state approval.

HELENA, Mont -- Montana Gov. Steve Bullock says counties will be permitted to hold all-mail voting in November as a way to limit the spread of the coronavirus.

OKLAHOMA CITY — Oklahoma governor spokesperson Charlie Hannema said Thursday that Republican Gov. Kevin Stitt, the first governor in the nation to test positive for the coronavirus, was infected when he hugged two friends from Tulsa.

At least one of the two men, whom Hannema did not identify, later tested positive for the virus. The meeting took place July 10 in Oklahoma City, and was not connected to Stitt’s attendance at a June 20 campaign rally for President Donald Trump in Tulsa.

Stitt announced July 15 that he was quarantining himself following a positive test.

The Oklahoma State Department of Health on Thursday reported 41,401 coronavirus cases and 593 deaths due to COVID-19, the disease caused by the virus, increases of 837 confirmed cases and 10 deaths from those reported Wednesday.

CHICAGO — Illinois has reported nearly 2,000 new confirmed COVID-19 cases as public health officials continued warnings Thursday that there could be a reversal in the state’s progress against coronavirus if things don’t change.

The Illinois Department of Public Health announced 1,953 confirmed cases, the highest since late May, and 21 deaths. Overall, the state has reported 188,424 confirmed COVID-19 cases and 7,594 deaths.

Public health officials say 41,686 tests were conducted in the past 24 hours and the seven-day average positive rate for tests is 4%.

The numbers come as Chicago Public Schools, the nation’s third-largest school district, decided earlier this week to scrap plans to offer some in-person teaching and will start the school year solely with remote learning.

LONDON — Britain has announced that travellers arriving from Andorra, Belgium and the Bahamas will have to quarantine for two weeks effective from Saturday, following an increase in confirmed coronavirus cases in all three locations.

Officials say COVID-19 cases in Belgium have increased fourfold since mid-July, and that in Andorra new cases per week have increased five-fold over the same period. They added that the Bahamas also saw a significant increase in case rates.

Officials now say all travel to Belgium, Andorra and the Bahamas should not go ahead, unless they are essential trips.

Britain on Thursday also announced that it has added Brunei and Malaysia to its list of safe countries — meaning quarantine upon arrival from those locations is not required — following a decrease in confirmed cases there.

INDIANAPOLIS — Indiana residents who have struggled to pay rent or utility bills during the coronavirus pandemic have one more week before the state’s protections against evictions and utility shutoffs end, despite a recent analysis that found that more than 40% of the state’s renters are unable to pay their rent.

Gov. Eric Holcomb announced Wednesday that he intends to allow the state’s rental property eviction moratorium and its ban on disconnecting utility services to expire on Aug. 14.

The Republican governor said people who are behind on their bills should immediately contact their landlords or utilities to work out payment plans, or reach out to state agencies for assistance in getting caught up on their payments.

Statewide, an estimated 44% of rental households are unable to pay rent and are at risk of eviction, according to a July 31 analysis by the investment banking company Stout Risius Ross, LLC.

ATHENS, Greece — Greek authorities have imposed a 10-day crackdown on public gatherings on the resort island of Poros, and have curtailed opening hours at the island’s restaurants, bars and clubs among a nationwide spike in COVID-19 infections.

Health officials said a total 153 new confirmed infections were recorded nationwide over the past 24 hours, the highest number in weeks.

For the next ten days, use of masks will be obligatory in all outdoors and indoors public areas on Poros, an island just off the coast of Greece’s southern Peloponnese peninsula. Restaurants, bars and clubs must close between 11 p.m. and 7 a.m., while outdoors and indoors public gatherings, in both public and private spaces, must be limited to nine people. And gatherings such as parties, street markets, open-air fairs or religious processions are banned.

Greek media reported that 13 new infections were recorded on the island.

Greece has recorded more than 5,000 confirmed infections and 210 deaths.

ANCHORAGE, Alaska — An attorney has said the city of Anchorage will take legal action against a local business for violating an order prohibiting indoor dining at restaurants and breweries during the coronavirus pandemic.

This will be the first time a municipality takes a business to court for violating an order since the pandemic began in March.

The restaurant continued dine-in service this week after the order went into effect Monday, and was given a stop-work order from the city Tuesday.