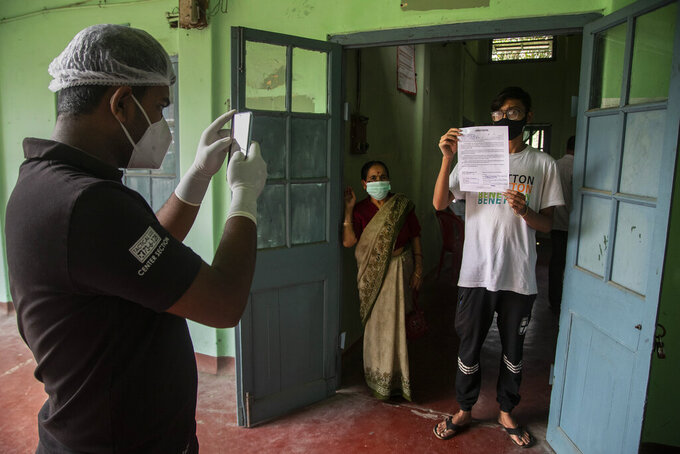 A health worker takes photograph of a person holding a document confirming he has tested positive for COVID-19 at a government run hospital in Gauhati, India, Saturday, May 8, 2021. Infections have swelled in India since February in a disastrous turn blamed on more contagious variants as well as government decisions to allow massive crowds to gather for religious festivals and political rallies. â€‹(AP Photo/Anupam Nath)

PHOENIX — An elected Arizona utility regulator has shared discredited conspiracy theories while trying to persuade energy and power providers not to require their employees to receive a COVID-19 vaccine.

The Arizona Republic reports that Arizona Corporation Commission member Jim O’Connor said during an interview that the government and the news media are covering up the shots causing numerous deaths and people becoming “human vegetables,” but there’s no evidence of such problems.

O’Connor, a Republican, was elected last November to his statewide office as one of five commission members. He served as a presidential elector for then-GOP nominee Donald Trump during his successful campaign in 2016.

— As US reopens, campuses tighten restrictions for virus

ISLAMABAD — Pakistan on Saturday received its first supply of COVID-19 vaccines through the U.N.-backed COVAX initiative, over 1.2 million doses of the Oxford-AstraZeneca vaccine.

The prime minister’s special aide on health, Dr. Faisal Sultan, asked people over age 40 to register for shots and said the Pakistani government would soon be able to expand its immunization program to other age groups.

A statement issued by Pakistan’s National Command and Operations Center said that 1,238,400 vaccine doses arrived in the first COVAX allocation while another batch of 1,236,000 was expected to arrive in a few days.

The delivery of first consignment of vaccine is the product of an unprecedented global partnership to ensure no country is left behind in the global race to fight the coronavirus, said Alexa Reynolds, the senior manager for Pakistan from Gavi, the Vaccine Alliance, one of the partner’s in the COVAX initiative.

Pakistan is in the middle of a third wave of virus infections, which authorities say is worse than the previous two. The country reported 120 deaths and 4,105 new confirmed cases on Saturday ahead of a planned weeklong closure of all businesses and transportation.

ROME — The Italian Health Ministry has set out guidelines for visiting people in nursing homes in the latest sign of reopening in the onetime epicenter of COVID-19 in Europe.

Health Minister Roberto Speranza signed a decree Saturday setting out a plan that, among other things, requires visitors to either be fully vaccinated, have proof of having had COVID-19 and recovered, or a negative test result in the past 48 hours. Other measures are specific to individual facilities to ensure distancing and proper hygiene.

As in other countries, Italian nursing homes and long-term residential facilities were devastated by the pandemic, especially during the first wave of infections last spring.

The total death toll isn’t known, since so many COVID-19-suspected deaths don’t feature into the official count because residents weren’t tested. Italy’s Superior Institute of Health reported in June that at least 9,154 people died in nursing homes from February-May, but that survey was based on partial responses to a voluntary survey of a quarter of Italy’s estimated 4,600 nursing homes. Along with health care workers, nursing home residents were the first group of Italians to be vaccinated.

Italy has largely reopened after its wintertime lockdown, even though it is continuing to add around 10,000 confirmed infections and around 250-300 deaths per day. The 224 deaths reported Saturday brought Italy’s confirmed toll to 122,694, second only to Britain in Europe and the sixth highest in the world.

MADISON, Wisc. — U.S. states asked the federal government this week to withhold staggering amounts of COVID-19 vaccine amid plummeting demand for the shots, contributing to a growing U.S. stockpile of doses.

From South Carolina to Washington, states are requesting the Biden administration send them only a fraction of what’s been allocated to them. The turned-down vaccines amount to hundreds of thousands of doses this week alone, providing a stark illustration of the problem of vaccine hesitancy in the U.S.

More than 150 million Americans — about 57% of the adult population — have received at least one dose of vaccine, but government leaders from the Biden administration down to the city and county level are doing everything they can to persuade the rest of the country to get inoculated.

The Biden administration announced this week that if states don’t order all the vaccine they’ve been allotted, the administration will shift the surplus to meet demand in other states.

China in March donated 600,000 doses of the vaccine to Sri Lanka. But until Saturday, the vaccine was given only to Chinese citizens living in Sri Lanka. So far, about 2,500 Chinese nationals have been given the both doses of Sinopharm.

Sri Lanka is facing a shortage of 600,000 doses of the Oxford-AstraZeneca vaccine in order to complete the 2nd round of the vaccine program.

Sri Lanka has so far given approval for three vaccines — Oxford-AstraZeneca, Sputnik V and China’s Sinopharm.

The number of COVID patients is rapidly rising across the country over the last two weeks.

ISTANBUL — Produce markets were allowed to open Saturday across Turkey as the country’s strictest lockdown continues amid an economic downturn with double-digit inflation.

The markets, or “bazaars,” are integral to Turkish food culture. Producers bring their fruits and vegetables to nearly every neighborhood on set days of the week.

The full lockdown that began in late April and is set to last until May 17 has curtailed this tradition and limited it to Saturdays in designated marketplaces.

Idris Taka, a vendor selling vegetables at an open-air market in Istanbul on Saturday, says he has taken a financial hit. “We could work four to five days a week and now we can work one day out of 17 days,” he said.

Critics have said the Turkish government’s measures to fight a surge in cases have been inconsistent and impractical. Residents have been ordered to stay at home, but millions of people are exempt from the lockdown and continue to work in factories, hospitals, agriculture and tourism, among other sectors. Foreign tourists are also exempt.

Prices continued climbing in April with year-to-year inflation hovering above 17%.

Grocery stores and supermarkets are open but are not allowed to sell nonessential times, including alcohol, electronics, clothing or stationery. They can sell food and hygiene products.

ISLAMABAD — Pakistan has reported 120 deaths and 4,105 new cases of COVID-19 in a single day ahead of a planned closure of all business and transport for a week starting Saturday.

Before the start of the long closure, thousands in every city and town across the country thronged to markets and malls to shop for Eid, which Muslims celebrate at the end of the holy month of Ramadan. Many did not wear face masks.

Traders associations say they intend to defy the planned closure. The commissioner of the capital, Islamabad, earlier said the administration will strictly implement the government plan.

Pakistan is currently in the middle of a third wave which authorities say is worse than the previous ones.

STOCKHOLM — The Swedish military says some 200 conscripts have been sent home from a major military exercise involving thousands of soldiers in southern and central Sweden due to a suspected outbreak of coronavirus infections.

The “Sydfront 21” drill with over 3,500 participants from 13 different units of the Swedish Armed Forces is the first major military exercise in the Scandinavian nation since the start of the COVID-19 pandemic.

Exercise leader Maj. Ake Palm told Swedish broadcaster TV4 Saturday that the military made the decision to send some of the soldiers home after several conscripts with cold-like symptoms either tested positive or were suspected to have been infected with coronavirus.

Alf Johansson, head of the exercise’s communications, told the Swedish news agency TT that the affected unit had 200 soldiers and 8 positive coronavirus cases have been confirmed so far. He defended arranging the drill in the middle of the pandemic by saying that the military hasn’t burdened civilian health care.

“This is a very important exercise for the army to train together so that we can maintain our ability to defend Sweden,” Johansson told TT.

Sweden, a nation of 10 million, has recorded just over 1 million coronavirus cases, with 14,173 deaths by Friday.

HARTFORD, Conn. — Of the more than 1.4 million Connecticut residents who are now fully vaccinated, 242 later became infected with COVID-19, according to data released Friday from the state Department of Public Health.

Among the 242 so-called “vaccine breakthrough cases,” 109 people had no symptoms of the disease. DPH reported three deaths among vaccinated individuals who were confirmed to have had underlying medical conditions. They were between the ages of 55-64, 65-74, and 75 years and older.

Nationally, there have been 132 vaccine breakthrough deaths, DPH said.

“The main takeaway is that COVID-19 vaccines are highly effective and cases of infection after a person is fully vaccinated are very rare,” Dr. Deidre Gifford, the state’s acting public health commissioner, said in a statement. Cases of COVID-19 in fully vaccinated individuals in Connecticut is less than 0.1%, according to the DPH data.

According to a memorandum of understanding signed Friday about 2,000 truck drivers from Alberta who transport goods from Canada to the U.S. will be eligible to be vaccinated at a highway rest stop near Conrad.

The vaccines will be available between May 10 and May 23. A similar program to vaccinate truck drivers from Canada began in North Dakota last month.

The Blackfeet tribe in northern Montana has given around 1,000 vaccines to their relatives and neighbors across the border.

SACRAMENTO, Calif. — The owner of a Northern California bar was arrested on suspicion of selling made-to-order fake COVID-19 vaccination cards to several undercover state agents for $20 each in what officials said Friday is the first such foiled operation they are aware of nationwide.

The plainclothes agents from California’s Department of Alcoholic Beverage Control were told to write their names and birthdates on Post-it notes. They say bar employees cut the cards, filled out the identifying information and bogus vaccination dates, then laminated the finished product.

Vaccination cards are being used in some places as a pass for people to attend large gatherings. The European Union is considering allowing in tourists who can prove they have been vaccinated.

They returned to the small-town bar this week and arrested the bar’s owner. Agents say they found another two completed cards and 30 additional blank cards along with a laminator and cutting device.

It wasn’t immediately known if the bar owner, Todd Anderson, has an attorney who can speak on his behalf. No one answered the phone at the bar Friday.

DENVER, Colo. -- A former Amazon warehouse worker has filed a complaint with the Colorado officials against Amazon over its COVID-19 policies and allegations that her firing was retaliatory.

Linda Rodriguez alleges Amazon fired her in 2020 because she raised concerns about the company’s COVID-19 policies that she said put workers at risk. Her complaint was sent Thursday to the state’s labor department.

An Amazon spokesperson in response to the complaint says Rodriguez was fired for timecard fraud that the company says was confirmed by time records and video footage. Amazon said the federal Occupational Safety and Health Administration confirmed Rodriguez withdrew a complaint filed with the agency.