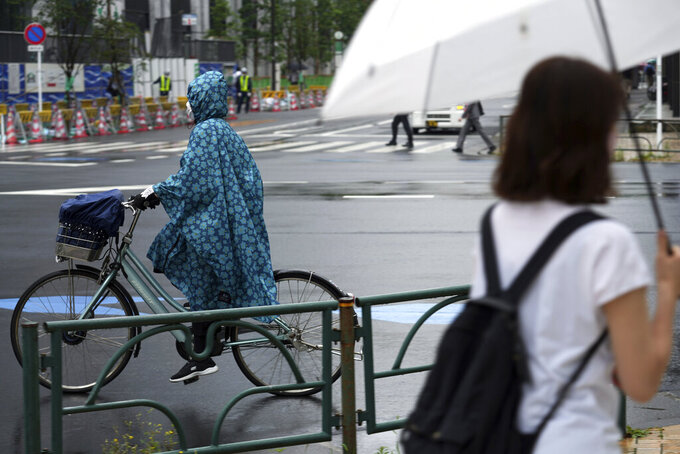 A woman wearing a protective mask to help curb the spread of the coronavirus rides a bicycle in the rain Monday, June 14, 2021, in Tokyo. Japan is desperately pushing to accelerate the pace of inoculations before the Tokyo Olympics. (AP Photo/Eugene Hoshiko)

HONOLULU -- Hawaii says a vaccinated Oahu resident who traveled to Nevada last month has tested positive for the delta variant of COVID-19.

The delta variant was first detected in India and is a more transmissible version of the disease. The variant currently makes up 6% of all cases in the U.S.

New analysis from researchers in the U.K. shows the Pfizer vaccine is 96% effective against hospitalization from the delta variant.

DECATUR, Georgia — A sheriff says a grocery store cashier has been killed in a shooting and three others wounded followed an argument over wearing face masks at an Atlanta-area supermarket.

DeKalb County Sheriff Melody Maddox said the shooting occurred Monday inside the Big Bear Supermarket in Decatur, a suburb east of Atlanta. Maddox said a man was arguing with a cashier over wearing a face mask when he pulled a weapon and shot the female cashier.

Authorities said a deputy working store security returned fire and shot the man. Maddox says the deputy, the suspected shooter and one other person were wounded. Decatur is a suburban community east of Atlanta.

BRUSSELS — President Joe Biden used his NATO press conference to acknowledge the approaching grim milestone of 600,000 Americans dead from the coronavirus pandemic and to urge more Americans to get vaccinated.

Speaking Monday to reporters after the NATO summit in Brussels, Biden opened his remarks referencing the fact that while average coronavirus cases and deaths are “dropping dramatically” in the U.S., “there’s still too many lives being lost,” which he called “a real tragedy.”

Biden then encouraged Americans to get vaccinated, saying that “we have more work to do to beat this virus, and now is not the time to let our guard down.”

LONDON — British Prime Minister Boris Johnson has confirmed that the next planned relaxation of coronavirus restrictions in England will be delayed by four weeks until July 19 as a result of the spread of the delta variant.

In a press briefing Monday, Johnson said he is “confident that we won’t need more than four weeks” as millions more people get fully vaccinated against the virus, which could save thousands of lives.

He said it is “sensible to wait just a little longer” and that “now is the time to ease off the accelerator.”

Johnson said the government’s aim is that by July 19, two-thirds of the adult population will have been double vaccinated. He also brought forward the date by which everyone over the age of 18 will be offered a first dose of vaccine from the end of July to July 19.

Under the government’s plan for coming out of lockdown, all restrictions on social contact were set to be lifted next Monday. Many businesses, particularly those in hospitality and entertainment, voiced their disappointment ahead of the official announcement.

One change that will take place is that the 30-person limit on weddings and wedding restrictions will be lifted. However, the ban on singing and dancing will remain as will social distancing requirements.

MONTPELIER, Vt. — Vermont became the first state in the country to vaccinate at least 80% of the eligible population, prompting Gov. Phil Scott to lift all remaining state COVID-19 restrictions.

Vermont crossed the threshold on Sunday when the state vaccinated 1,151 people, reaching a level of 80.2% of those over age 12 with at least one shot of the vaccine. The goal was reached 15 months after the Republican governor declared the state of emergency on March 13, 2020.

The state has now vaccinated 81.1% of the population over 18, exceeding President Biden’s goal of 70% of those 18 and older.

“Our state has shown the world what’s possible when you have a group of people with the right attitude, following the data and trusting medical science,” Scott said.

SANTA FE, N.M. — New Mexico residents who get vaccinated against COVID-19 will now be eligible for a $100 incentive.

The New Mexico Department of Health over the weekend announced the reward for anyone who gets the second dose or the one-dose Johnson & Johnson vaccine by Thursday.

State health officials are trying to reach a goal of having 60% of New Mexico residents age 16 and up fully vaccinated this week.

The latest incentive is on top of the state’s “Vax 2 the Max” program, where vaccinated residents can win prizes from a pool totaling $10 million. The rewards include a $5 million grand prize.

New Mexico will hold its first drawings Friday for four prizes of $250,000 each.

The governor says the lottery program is funded by federal pandemic relief money.

BERLIN — German officials on Monday said the country’s coronavirus tracing app has helped alert some 200,000 people who later tested positive for COVID-19 that they’d been in contact with an infected person.

The government said that during the height of the outbreak last winter, up to 2,000 people received app alerts each day that resulted in them getting tested sooner than they might otherwise have done.

Germany’s Corona-Warn-App has been downloaded more than 28 million times since it was launched almost a year ago.

New functions have been continually added to the app, including the ability to receive test results and a digital vaccination certificate function to facilitate travel across the European Union.

NICOSIA, Cyprus — Cyprus has banned entry of anyone who has been to or passed through India in the previous two weeks of travelling to thwart the spread of the Indian variant of COVID-19.

In a directive issued on Monday, the Cypriot government said the ban excludes Cypriot citizens and their families, European Union citizens and foreign nationals who live permanently in Cyprus.

However, they either must undergo a PCR test 72 hours prior to boarding a flight to Cyprus, be tested for the virus on arrival or remain under a 10-day quarantine from the date of their arrival at quarters designated by authorities. Quarantine costs will be covered by the Cypriot government.

Cyprus has already confirmed the presence of the Indian COVID-19 variant within the community, although the U.K. variant remains the most widespread. More than 40% of Cyprus’ population of around 900,000 has been fully vaccinated.

GENEVA — The head of the World Health Organization said the number of new coronavirus cases reported have now dropped for the past seven weeks, the longest such period of decline since the pandemic began.

At a press briefing on Monday, WHO director-general Tedros Adhanom Ghebreyesus welcomed the drop, but said the number of COVID-19 deaths weren’t falling as quickly and said the vastly unequal access to coronavirus vaccines was threatening further progress.

“The virus is moving faster than the global (vaccine) distribution,” Tedros said. He called for political leaders to commit to immunizing at least 70% of the world’s population by the time of next year’s G7 meeting.

Tedros welcomed the 870 million doses of vaccines G7 leaders promised to the U.N.-backed initiative known as COVAX this weekend, but said 11 billion doses were needed, noting that more than 10,000 people are still being killed by COVID-19 every day.

“There are enough doses of vaccine to drive down transmission and save many lives if they’re used in the right places for the right people,” he said, emphasizing that health workers and those most vulnerable in poor countries should be immunized first. Tedros has previously urged rich countries to skip vaccinating their teenagers and children and to donate those doses immediately to the developing world.

The drop runs alongside the authority’s ongoing vaccination campaign which has so far seen more than 8.5 million vaccine doses administered to Romania’s population of more than 19 million. Over the past month, however, vaccination uptake has slowed considerably, raising concerns about vaccine hesitancy.

Since the start of the pandemic, Romania has reported more than one million COVID-19 infections, and more than 31,000 people have died.

Starting Tuesday, face masks will be optional for visitors to the theme park resort who are vaccinated, though Disney workers won’t require proof of vaccination, the company said on its website.

Visitors who aren’t fully vaccinated still will need to wear face masks indoors and on all rides and attractions. All visitors, whether vaccinated or not, will still be required to wear face coverings on buses, monorails and Disney Skyliner, the resort’s aerial gondola, according to the latest guidelines.

The decision on masks is Disney World’s latest tweak to the virus-related safety rules it created when the coronavirus pandemic was declared in March 2020. Disney World closed for two months last year at the start of the outbreak and reopened last summer with strict safety guidelines that involved masking, social distancing and crowd limits.

“It’s important to remember that some experiences and entertainment may still be operating with limited capacity or may remain temporarily unavailable,” the company said on its website. “We’re not quite ready to bring back everything yet, but we are optimistic and look forward to the day when Disney pals and princesses are able to hug once again.”

TEHRAN — Iran’s state TV is reporting that the country has approved an emergency use of its first domestically developed coronavirus vaccine that could bring the hardest-hit country in the Middle East closer to inoculating its citizens against COVID-19.

The emergency authorization was approved after the country faced with problems from importing enough vaccines.

The TV quotes the health minister, Saeed Namaki as saying, “Permission to use the Iranian vaccine COVIran Barekat was issued yesterday.”

Iranian pharmaceutical company Shifafarmed made the vaccine based on deactivated virus, and the first study of the safety and effectiveness began in late December.

Iran has also said it is working on a vaccine with cooperation from a foreign country. Namaki said that another vaccine, produced jointly by Iran and Cuba, will join the country’s vaccine package in the next week.

Iran’s local vaccine research has gained urgency as officials allege that heavy American sanctions will hamper the Islamic Republic’s mass inoculation efforts. Although Iran retains routes to vaccines, including through its participation in COVAX, an international initiative designed to distribute vaccines to countries regardless of their wealth, international banks and financial institutions are reluctant to deal with Iran for fear of American penalties. Under COVAX rules, Iran could at a maximum order enough doses to vaccinate half of its 82 million people.

BERLIN — Germany has recorded its lowest number of new daily coronavirus infections in nearly nine months, and officials are floating the possibility of loosening mask-wearing rules.

The Robert Koch Institute, the national disease control center, said Monday that 549 new cases were reported over the previous 24 hours. It’s the first time since Sept. 21 that the figure has been under 1,000, though it’s typical for numbers over the weekend to be relatively low because fewer tests are conducted and reported.

Germany has reported more than 3.7 million cases since the pandemic began. Another 10 deaths brought the country’s toll to 89,844.

Infection figures have declined sharply in recent weeks and a discussion has started about the future of mask-wearing rules. Health Minister Jens Spahn told the Funke newspaper group that a step-by-step approach should be taken, with rules to wear them outdoors lifted first. He said they could be dropped “little by little” indoors in areas with very low infections and high vaccination rates.