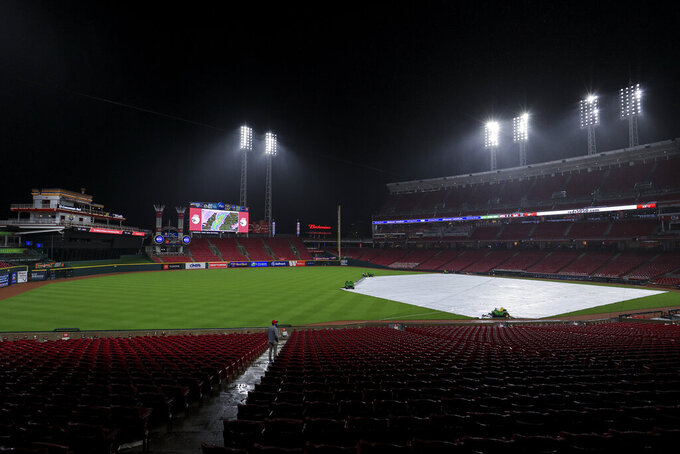 A trap covers the infield during a rain delay in the eighth inning of a baseball game between the Arizona Diamondbacks and the Cincinnati Reds in Cincinnati, Tuesday, April 20, 2021. (AP Photo/Aaron Doster)

Vegas Golden Knights goaltender Robin Lehner railed against the National Hockey League on Wednesday, saying the league indicated it would relax coronavirus protocols for teams that reached a certain vaccination threshold and then changed course.

He said he had calls with the league and NHL Players’ Association a day earlier and wasn’t satisfied with the answers.

The NBA, NFL and Major League Baseball have told teams that protocols such as mask-wearing can be relaxed when a certain percentage of personnel are fully vaccinated. Lehner said the NHL showed players the NBA model and promised the same before going back on it.

The Canadian Football League is pushing back the start of its 2021 season and reducing the number of games played due to the COVID-19 pandemic.

The league announced Wednesday that it plans to kick off the season Aug. 5, nearly two months later than originally planned.

The original schedule was slated to open June 10 with each team playing a full 18-game regular season, but with Canada dealing with a third wave of the virus, the CFL board of governors also decided to reduce the schedule to 14 games. The decision also pushes back the Grey Cup game three weeks, to Dec. 12 in Hamilton, Ontario.

The league stressed that the schedule revision is merely a target date because of the unpredictability of the COVID-19 pandemic. Four of the CFL’s nine franchises operate in Quebec and Ontario, and those provinces are besieged by a third wave of the pandemic. The CFL canceled last season due to the pandemic.

The league hopes the delay will allow for more Canadians to receive their COVID-19 vaccinations and thus increase chances of fans being in the stands at some point once football resumes. That’s crucial for teams, which are heavily reliant on ticket sales to generate operating revenue.

The Cincinnati Reds are increasing their fan allowance at Great American Ballpark to nearly 17,000.

The increased capacity will take effect for games beginning April 30 when the Chicago Cubs come to town for a weekend series.

Following new state health orders, the Reds are allowed to boost capacity from 30% to 40% of the park, which seats 42,319. The guidelines also allow for “mixed pods” consisting of multiple groups from separate parties, capped at 10 people.

Crowds at Great American Ball Park have averaged around 12,000, in keeping with the 30% guidelines.