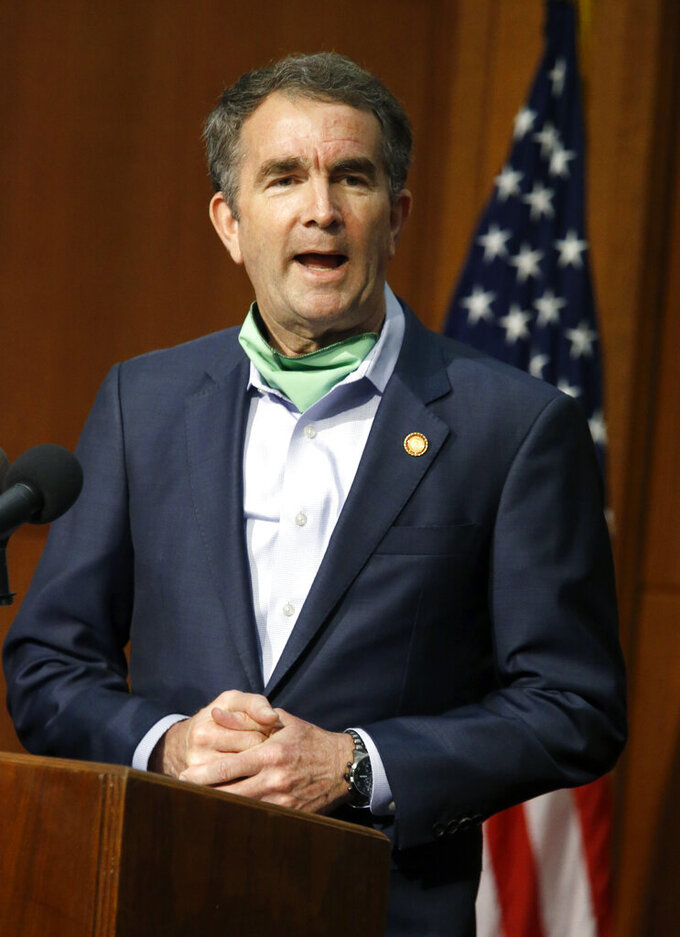 Virginia Gov. Ralph Northam says racing will be allowed to resume in the state without spectators.

The governor says NASCAR will race at Martinsville Speedway on June 10, and that other forms of auto racing and horse racing also are cleared to resume.

“These events will not be open to the public and no spectators will be allowed, among other restrictions,” he says.

NASCAR was originally scheduled to make its first of two stops at Martinsville in early May, but the event was postponed because of the coronavirus. It also will visit Richmond Raceway on Sept. 12 and conclude the season with a return to Martinsville on Nov. 1.

The video shows Gesicki lobbing a football over a multi-story beach house, running through the garage and making the catch on the other side on the run as he heads into the street.

“I was honestly just super bored, and I was at my girlfriend’s beach house, pretty close to where I live, and we were just kind of hanging out,” Gesicki says . “We saw something similar to that on the internet and we were like, ‘Hey, I might try that,’ and ended up taking a couple tries. It was fun.”

Gesicki had a breakout 2019 in his second NFL season. He capped it by making the winning touchdown catch in the finale at New England.

Live horse racing is slated to resume in Maryland this weekend with a three-day session at Laurel Park, which will remain closed to the general public.

The Maryland Jockey Club says it has received approval from the Maryland Racing Commission to launch its Summer 2020 meet with live racing on Saturday, but fans are forbidden from entering the track until clearance is received from the state.

All races on Saturday, Sunday and Monday will be streamed live on the Laurel Park website.

Sports Minister Vincenzo Spadafora gave Serie A the green light to resume after a meeting with Italian soccer authorities on Thursday.

A medical protocol for matches was approved by a technical scientific committee earlier.

Spadafora says Serie A will restart on June 20 but the Italian Cup semifinals and the final could be played on June 13 and 17.

Serie A has been suspended since March 9, when the government ordered a nationwide lockdown because of the coronavirus pandemic.

There are 12 rounds remaining in Serie A, plus four matches that were postponed from the 25th round.

Texas will soon allow outdoor pro sports events to have spectators, but their numbers will be strictly limited.

Republican Gov. Greg Abbott has revised a decision to let pro sports leagues host events without fans starting in June as part of the states’ move to reopen amid the coronavirus pandemic.

Abbott’s new order allows outdoor stadiums to host fans up to 25 percent of their normal capacity. Leagues will have to apply to state health officials to be allowed to have fans. Indoor events will still be without spectators.

The PGA Tour plans to restart its season at Colonial in Texas on June 11-14 but has said it would not include fans.

The state has set up several guidelines for leagues to follow, including a recommendation that spectators and employees keep at least 6 feet apart from anyone not from their household. If that is not feasible, other measures such as face coverings and sanitation protocols should be followed.

Athletes will not be required to wear masks but the guidelines encourage them to be worn on the sidelines.

The order does not address college sports events.

Holding the small group sessions must not conflict with local public health or government restrictions, but is the next step in the league’s hopes of returning to action. A maximum of six players may be assigned to a single group.

Teams must submit club-specific plans for the small group sessions to the league. The league said teams may split full fields into two equal halves and teams may define up to six zones per half field, spaced at least 10 feet apart. Only one player may be in each zone at any time to maintain physical distancing. Players may switch zones but two players cannot occupy the same zone.

Players may pass and shoot on goal, but all training exercises must allow for 10 feet of distance.

The league says all health and safety measures required when teams began individual training must be maintained. Players will be screened, including temperature checks, before being allowed on training fields. All equipment must be cleaned after use.

The league-wide moratorium on full team training remains in effect through June 1.

Darlington Raceway is switching gears for its next event.

Two weeks after hosting NASCAR’s return to racing, the track will hold graduation ceremonies for the South Carolina Governor’s School for Science & Mathematics. There will be 120 graduating seniors at Saturday’s event from the school in Hartsville, a few miles from NASCAR’s oldest superspeedway.

Darlington Raceway President Kerry Tharp said the track was honored to help the high school seniors be recognized in a proper way.

Traditional high school graduation ceremonies have been canceled due to the coronavirus pandemic. The ceremony will take place at a parking lot on track property. Afterward, the graduates and their parents will have the chance to drive their vehicles for a lap around the 1.366-mile track and get their pictures taken on the start-finish line.

Malcolm Jenkins, who this offseason left the Eagles to sign with the New Orleans Saints as a free agent, will be the keynote speaker at Philadelphia’s virtual graduation on June 9.

Jenkins starred for the Eagles for the last six seasons and the safety won an NFL championship in 2017. He also has been a leader of several off-field initiatives, and his foundation has a mission to promote positive change in the lives of underserved youth in New Jersey, where he grew up; Ohio, where he went to college at Ohio State; Pennsylvania and Louisiana, homes of his pro teams.

“Malcolm was selected not for his greatness on the field and his two Super Bowl rings, but because of his compassion and advocacy around social justice,” said Donna Frisby-Greenwood, CEO of the Fund for the School District of Philadelphia and co-chair of the commencement planning committee. “Malcolm’s foundation focuses on youth leadership development and skill building, and we think that that makes him a perfect speaker for us.”

The hour-long graduation will be streamed on several platforms, including the school district’s website. Frisby-Greenwood said that several companies and organizations are involved with planning and serving as sponsors. The Philadelphia Orchestra has recorded “Pomp and Circumstance” for the ceremony. And the city’s Free Library will host the live stream of the event on its platform.

Individual high schools will be distributing caps and gowns to the students to wear during the festivities.

Serbia’s top soccer league has decided that no teams will be relegated this season as a result of the coronavirus pandemic.

However, four teams will still be promoted from the second tier, making for an expanded 20-team league next season.

The league says the Serbian soccer federation accepted its proposal to adapt to the shutdown forced by the pandemic.

Games are set to resume Friday to complete the final four rounds of the regular season and decide a champion and qualifying places for UEFA competitions. Red Star Belgrade has an 11-point lead ahead of Partizan.

However, the league’s normal eight-team groups that were to decide the postseason championship and relegation spots have been scrapped.

The Premier League’s official broadcasters say the competition will restart on June 17.

The BBC and Sky Sports say there will be a doubleheader on that day with Manchester City playing Arsenal and Aston Villa hosting Sheffield United.

Playing those make-up games on a Wednesday will ensure the 30th round can be contested the following weekend.

The last match was played on March 9 before the competition was suspended because of the coronavirus pandemic.

Squads were only allowed to restart practice sessions in small groups last week but contact and tackling is now allowed between players.

The head of English cricket says “unorthodox” measures could be explored to ensure at least part of the domestic season is played this year.

The England and Wales Cricket Board says there will be no professional domestic cricket before Aug. 1 because of the coronavirus pandemic.

The governing body says its ambition remains to stage domestic competitions some time over the upcoming summer and that talks will continue with the government and health experts.

The ECB has outlined a slew of proposals for play in both red ball and limited-overs cricket. They include opening up all grounds or using regional grouping for matches. Matches could yet be played before a limited number of supporters.

England is looking to play international cricket from July.

The European Tour plans to resume its season in July starting with a six-week stretch of golf tournaments in Britain and running through to the World Tour Championship in Dubai in December.

The tour says its events initially will be held without spectators and will be subject to strict testing protocols amid the coronavirus pandemic.

The season has been suspended since March 8. It will resume with the British Masters in northern England from July 22-25 before five further events in the “UK Swing” across England and Wales.

Four Rolex Series events have been rescheduled for October to December. They are the Scottish Open, the BMW PGA Championship, the Nedbank Golf Challenge and then the season-ending World Tour Championship from Dec. 10-13.

The tour says details of other tournaments from September to November will be announced later.

Three players from English soccer clubs Blackburn and Fulham have tested positive for the coronavirus.

Bennett says he doesn’t “feel unwell” and doesn’t have any symptoms.

Fulham says two players tested positive but did not name them.

The positive cases at the second-division clubs came after tests on 1,030 players and staff from Monday to Wednesday.

The three players will have to self-isolate for seven days before returning to training ahead of a potential resumption of the competition.

The Hungarian soccer federation says matches in the country can once again be held with spectators in the stadiums.

The announcement comes on the back of a government decree allowing the option amid the coronavirus pandemic.

Organizers are obliged to keep three seats empty between each occupied seat and no fan may sit directly behind or in front of another. Players and essential personnel on or near the field during matches must recently have tested negative for the coronavirus.

The federation says clubs can decide on their own whether they want to play in front or fans again.

Tickets for next Wednesday’s Hungarian Cup final between Budapest Honved and Mezokovesd-Zsory at the Ferenc Puskas Stadium in Budapest will soon be sold online.

The Dutch Grand Prix has become the fourth Formula One race to be canceled this season.

Organizers of the first Dutch GP in 35 years preferred to wait until next year in hope fans will be able to attend, rather than hold the race without them this time.

The race in Zandvoort was set for May 3 and initially postponed.

Race director Jan Lammers says “we would like to celebrate this moment, the return of Formula 1 in Zandvoort, together with our racing fans in the Netherlands.”

The other races canceled were the season-opening Australian GP on March 15; the Monaco GP on May 24; and the French GP on June 28.

F1 organizers still hope to reschedule those and hold 15-18 races this season, starting with back-to-back races at the Austrian GP in July.