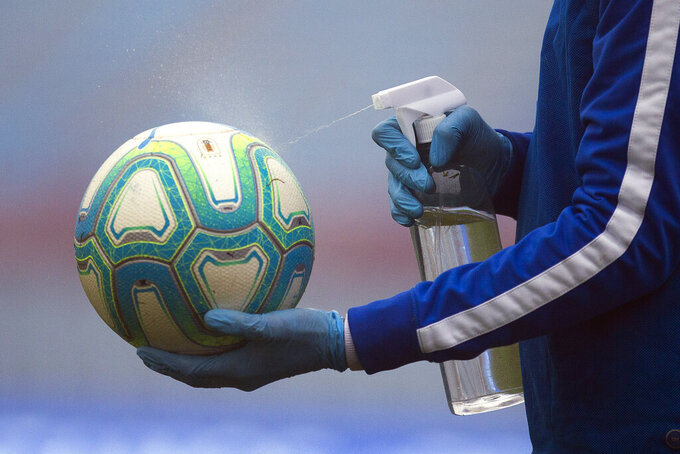 East Carolina has paused football activities indefinitely after a coronavirus cluster was reported within the team as well as within a campus residence hall.

In a statement, East Carolina’s athletics department said affected individuals would be isolated and contact tracing used to determine close contacts for quarantine.

South Carolina has been approved by the state to permit 20,000 fans at football games this fall, about a quarter of capacity at Williams-Brice Stadium.

The athletic department announced the approval for its fall venues, including the football stadium, which has a listed seating capacity of 80,250.

The Gamecocks open the season at home against Tennessee on Sept. 26.

North Carolina State says it’s still “progressing with the expectation to compete” in fall sports as the school goes to online-only courses for undergraduates.

The school’s athletics department issued a statement Thursday, shortly after Chancellor Randy Woodson announced the school would shut down in-person undergraduate instruction as of Monday.

In an open letter, Woodson said the school won’t close on-campus housing. That came after the school identified three coronavirus clusters as well as reporting more than 500 students were in quarantine and isolation through “aggressive” contact tracing.

The athletics statement says athletes can continue to hold practices and workouts while the school works with the Atlantic Coast Conference and health officials “towards the safest and most responsible course of action.”

The athletic department said the football program decided to test twice this week in light of the university’s decision Tuesday to move to remote learning because of a COVID-19 outbreak on campus. A total of 232 tests were done.

The five players who tested positive are in isolation. Through contact tracing, six other players have been placed in quarantine.

The football team has conducted 851 coronavirus tests since June 18, with nine positive results.

The Fighting Irish did not practice for a second straight day. Another round of testing is set for Friday. The team said practices would resume based on the recommendation of the medical staff.

Pittsburgh Pirates President Travis Williams has tested positive for COVID-19 and says he is “on the road to recovery.” He says he knows of no other positive tests within the organization.

He said in a statement Thursday he began feeling symptoms Monday night.

“Fortunately, however, I followed the critical health and safety protocols that we have put in place, including wearing a mask as required, maintaining safe social distance.” He adds that he has started isolating and is getting further tests.

Williams says the team has begun tracing to identify anyone with whom he may have been in contact. He adds that this does include players, coaches or support staff because the team had been on the road.

“I wanted to use my diagnosis as another reminder that we are all susceptible,” he said. “It is critical we all follow CDC guidelines and state mandates and have a heightened sense of self awareness in order to protect each other.”

The Serie A club has not revealed their names but says both players are asymptomatic and are currently self-isolating.

The positive cases were discovered from tests carried out before starting pre-season training.

Torino says three other players who were in close contact with the duo in the past few days will be subject to further testing.

Five other Serie A players have tested positive for the coronavirus in the past two days.

Six UConn football players have tested positive for the new coronavirus, leading the school to suspend all team activities on Thursday.

UConn canceled its football season this month, but the team still had been practicing on Tuesdays and Thursdays and doing weight training on Mondays, Wednesdays and Fridays.

The school said other athletes who were in contact with the six players also have been placed in quarantine. It was not immediately clear if any of the infected football players were reflected in the 11 positive tests the university reported Wednesday among the entire student body.

West Virginia’s season opener against Eastern Kentucky on Sept. 12. will be held without fans because of the pandemic.

Athletic director Shane Lyons said Thursday the goal is “to have fans at Milan Puskar Stadium this season, but right now that is not possible.”

The school said in a statement only essential game operations personnel and families of the players and football staff will be allowed to attend.

In-person classes at West Virginia start Aug. 26 for freshmen, graduate and some professional students, while upperclassmen will start classwork online. Masks must be worn on campus.

The Big 12, Atlantic Coast Conference and Southeastern Conference are among six Football Bowl Subdivision leagues proceeding with plans to play this fall. The Big Ten and Pac-12 abandoned their fall season.

Petagna is asymptomatic and had the test after his brother tested positive.

Napoli signed Petagna from Spal in January but he remained on loan at the rival Serie A club until the end of the season.

Roma goalkeeper Antonio Mirante said Wednesday that he has the coronavirus and Cagliari announced that three other players had also tested positive.