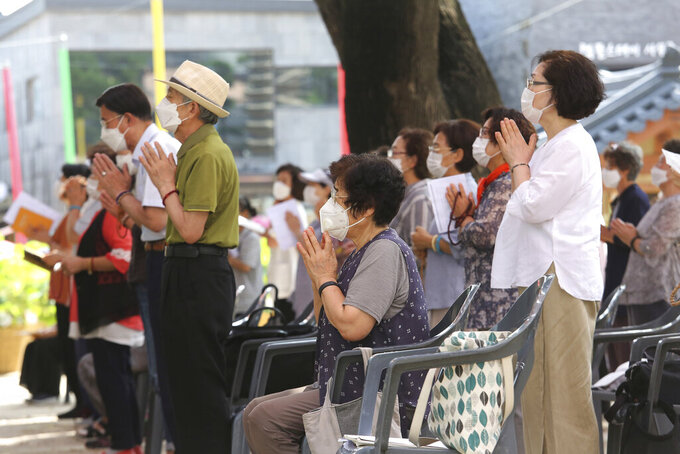 People wearing face masks to help protect against the spread of the coronavirus pray while maintaining social distancing during a service at the Chogyesa temple in Seoul, South Korea, Sunday, Aug. 23, 2020. (AP Photo/Ahn Young-joon)

SEOUL, South Korea — South Korea counted its 11th straight day of triple-digit daily jumps in coronavirus cases as officials tighten social distancing restrictions nationwide to combat what they describe as the biggest crisis since the emergence of COVID-19.

The 266 cases reported by the Korea Centers for Disease Control and Prevention Monday came after three consecutive days of over-300 increases, although infection numbers tend to be lower at the start of the week due to the lesser number of tests in weekends.

The KCDC said 202 of the new cases came from the densely populated Seoul metropolitan area, home to half of the country’s 51 million population, where health workers have struggled to track transmissions linked to various sources, including churches, restaurants, schools and workers.

Infections were also reported in major cities throughout the country, including Busan, Daejeon and Sejong.

The country since Sunday has banned larger gatherings, shut down nightspots and churches and removed fans from professional sports nationwide.

— Pushing for breakthroughs in treatments for the coronavirus, White House officials are suggesting there are politically motivated delays by the Food and Drug Administration in approving a vaccine and therapeutics for the disease.

— Florida slashed local health department staffing as its population grew over the last decade. Now it's a microcosm and a cautionary tale for America.

— India’s use of cheaper, faster but less accurate tests for the coronavirus highlights some of the inherent pitfalls of a strategy that the U.S. is now considering to scale up testing.

IOWA CITY, Iowa — A young child died due to complications from coronavirus in June, the first confirmed death of a minor in Iowa during the pandemic, the state health department belatedly announced Sunday evening.

The Iowa Department of Public Health said the state medical examiner’s office concluded its case investigation Aug. 6 into the death of the child, who was under the age of 5. But the death wasn’t reported in the state’s statistics until Saturday, more than two weeks later.

“The child’s death was publicly reported this weekend after ensuring the individual’s identity would remain protected and notifying the family,” the department said in a statement. “We have made every effort to protect the identity of this child, while the family grieves this devastating loss. Again, we send our sincerest condolences.”

The confirmation of the state’s first child death comes one day before dozens of school districts are prepared to begin the school year on Monday — a development that has many educators and parents already on edge.

Iowa Gov. Kim Reynolds has ordered schools to reopen for at least 50 percent in-person instruction, despite a pandemic that has already killed 1,036 people and seen infections soar in recent days.

MELBOURNE, Australia — Australia’s hard-hit Victoria state on Monday recorded its lowest tally of new coronavirus cases in eight weeks with the state capital Melbourne half way through a six-week lockdown.

Victoria reported 116 new cases and 15 deaths. That is the lowest daily tall of new cases since 87 were reported on July 5. The daily count has been as high as 725 news cases in early August.

The state recorded 208 new cases on Sunday and 182 on Saturday.

Chief Health Officer Brett Sutton had predicted on Sunday that numbers could dip below 150 this week.

He added although the daily case numbers had been “jumping around,” he expected they were on a downward trajectory.

But health authorities have warned that the daily tally would need to fall to single digits or low double digits before the Melbourne lockdown was relaxed.

WASHINGTON — President Donald Trump says the Food and Drug Administration has issued an emergency use authorization for convalescent plasma to treat COVID-19 patients.

Trump, announcing the decision Sunday at the White House, called convalescent plasma a “powerful therapy.” He says the FDA’s action will expand access to the treatment, which is already being used. The treatment involves transferring antibodies from recovered COVID-19 patients to patients suffering from the disease.

The announcement follows days of suggestions by White House officials of politically motivated delays by the FDA in approving a vaccine and treatments for the disease caused by the coronavirus.

Trump made the announcement on the eve of the Republican National Convention that will nominate him to run against Democrat Joe Biden.

PESHAWAR, Pakistan — Pakistani authorities have closed about two dozen hotels in a scenic tourist destination in the country’s northwest after dozens of hotel employees tested positive for the coronavirus.

According to Maqbool Hussain, a district government official, Sunday’s move to place high-risk areas of Shogran, Naran and Kaghan under lockdown was aimed at containing the spread of the virus.

He said as many as 47 hotel employees who tested positive for COVID-19 were quarantined at the hotels where they worked.

The measures came hours after Pakistan reported only four new COVID-19 fatalities in the past 24 hours, the fewest deaths reported in a day since March. That announcement raised hopes that Pakistan is on the right path to fully containing the new virus despite having a fragile health system.

Pakistan has confirmed more than 275,000 coronavirus infections and nearly 6,300 deaths since reporting its first case in February.

The government, alarmed by the fact that half of all coronavirus cases have been confirmed in the first three weeks of August, has imposed restrictions on social gatherings and the opening hours of restaurants, cafes and bars in 20 localities, including the capital Athens, until the end of the month.

It is also monitoring for violations more closely, and imposing fines. In the northern Greek city of Thessaloniki, Greece’s second largest, a groom was fined 3,000 euros ($3,540) Saturday for having 80 guests at his wedding reception instead of the maximum of 50 allowed at social gatherings. A 52-year-old Bulgarian citizen was fined 5,000 euros ($5,900) for leaving a designated quarantine hotel in the same city, after testing positive for the virus. He was arrested while engaging in contraband trade of toys, police said.

TALLAHASSEE, Fla. — Florida broke the 600,000 mark for confirmed coronavirus cases Sunday but reported one of its lowest daily totals in two months, continuing a downward trend that began five weeks ago.

Florida reported 2,974 new cases on Sunday, only the second time since June 22 that fewer than 3,000 new cases have been tallied in a day. The other time was Monday, when 2,678 cases were reported. Sundays and Mondays often have a low number of reports as not all hospitals report on the weekend.

The daily total peaked July 15 when more than 15,000 cases were reported, but has been declining since.

Hospitalizations due to COVID-19 have also been declining. Late Sunday morning, 4,578 patients were being treated for the disease in Florida hospitals compared to Saturday’s 4,773. It is a drop of almost 800 since Thursday. Hospitalizations peaked at above 9,500 on July 23.

ROME — The day-to-day number of new coronavirus cases in Italy climbed for a seventh straight day, when 1,210 confirmed infections were registered on Sunday, the highest daily increase since May 12.

Lombardy, where some 40% of the nation’s known cases have occurred in the pandemic, registered 239 new infections since Saturday, while Lazio counted 184.

LONDON — The EU’s trade commissioner is coming under intense pressure to step down after attending a golf event despite a ban on public gatherings during the pandemic.

The job of Phil Hogan, an Irishman who is expected to play a key role in trade talks with the U.K., is under threat amid a growing crisis stemming from a golf society dinner in the west of Ireland that was attended by more than 80 people. A surge in coronavirus cases recently prompted Ireland to reimpose restrictions on public gatherings that were eased in early summer.

The agriculture minister and deputy speaker of the Senate resigned last week after confirming they were at the event.

Hogan offered a “fulsome and profound apology” over the incident.

The deputy head of government, Leo Varadkar, said he shared the public’s anger at the golf event, but said the apology helps. He told RTE that Hogan may not have been as familiar with the coronavirus situation in Ireland because he was not based in the country.

Varadkar said that “he also needs to account for himself and explain and answer any questions that might arise, not just in relation to the dinner but also his movements around the country.”

“If he cannot do that, he needs to consider his position,” he said.

LONDON — Britain’s top medical officers say children are more likely to be harmed by staying away from school than from being exposed to the coronavirus.

England’s chief medical officer on Sunday joined his counterparts in Scotland, Northern Ireland and Wales in saying that children are less likely to contract the virus than adults and have “an exceptionally low risk” of dying from COVID-19.

By contrast, they said studies show that not going to school limits children’s ability to succeed in life and may worsen physical and mental health problems.

ISLAMABAD — Pakistani authorities on Sunday reported only four new COVID-19 fatalities in the past 24 hours, the fewest deaths since March.

The announcement raises hopes that Pakistan is on the right path to fully containing the coronavirus despite having a fragile health system.

Pakistan witnessed a sudden spike in infections and deaths in June, but confirmed cases and fatalities have gradually declined since then. The latest development comes days after Pakistan’s drug regulatory agency approved final-phase testing of a Chinese-made coronavirus vaccine.

Pakistan hopes it will get the vaccine on priority from neighboring China if its clinical trials show success.

ROME — Sicily’s governor is ordering all migrants who reach the island by sea be transferred from the Mediterranean island as part of measures to combat the spread of COVID-19.

The ordinance, signed by Gov. Nello Musumeci, went into effect Sunday and stipulates that all centers housing migrants awaiting processing of asylum applications be shut down by the end of Monday.

His order, effective through Sept. 10, also forbids any boat, including charity vessels, to bring migrants to the island.

While in past years the great majority of migrants reaching Italy were rescued at sea by humanitarian groups, cargo ships or military vessels, this year, nearly 80% of arrivals reached Italian shores autonomously, most setting sail from Tunisia instead of Libya, where human traffickers are based.

Many come ashore on tiny Lampedusa island, but its migrant center is dangerously overcrowded. So Italy has taken to quarantining the latest arrivals aboard chartered ferries offshore Sicily. On Saturday, one-third of Sicily’s 48 one-day total of new confirmed coronavirus infections occurred in migrants.

MOSCOW — Yulia Tymoshenko, the former Ukrainian prime minister and a key figure in the 2004 Orange Revolution protests, has contracted COVID-19.

Her spokeswoman Marina Soroka said in a Sunday post on Facebook that Tymoshenko is in serious condition with a fever of 39 C (102 F), but did not specify if she has been hospitalized.

Tymoshenko captured attention worldwide for her speeches to huge crowds of protesters in the 2004 demonstrations that forced the rerun of a disputed presidential election.

After Viktor Yushchenko won the election rerun, Tymoshenko became prime minister, but was dismissed amid quarrels and then returned to the office. Under subsequent President Viktor Yanukovych, she was imprisoned for three years on a conviction of abuse of power.