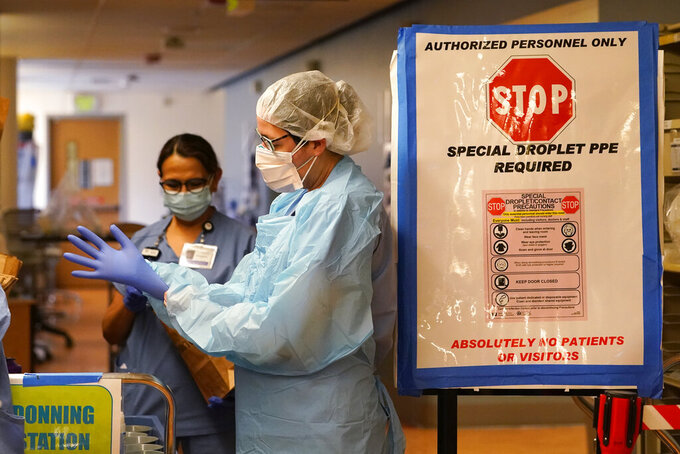 FILE - In this Jan. 26, 2021, file photo, registered nurse Diane Miller pulls on gloves and other protective equipment as she prepares to enter patient rooms in the COVID acute care unit at UW Medical Center-Montlake in Seattle. The deadliest month of the coronavirus outbreak in the U.S. drew to a close with certain signs of progress: COVID-19 cases and hospitalizations are trending downward, while vaccinations are picking up speed. (AP Photo/Elaine Thompson, File)

SEATTLE — Authorities in Washington state are warning hospitals and other facilities giving coronavirus vaccinations not to give special access to some people, saying they will risk having their supplies of doses cut.

The state Health Department said in a statement Monday that “VIP scheduling, reserving doses for inequitable or exclusive access, and similar practices are banned and will not be tolerated.”

The Seattle Times has reported that three medical systems in the region gave special vaccine access to big donors or foundation members. Two of the hospital organizations acknowledged they made a mistake in prioritizing influential people.

The Health Department’s announcement says that if a vaccine provider is found to be giving out shots in an inequitable manner “we may reduce or stop allocations to that provider.”

— Even if schools reopen by late April, millions of students, many of them minorities in urban areas, may be left out

BOSTON — Massachusetts has passed 500,000 coronavirus cases for the pandemic even as other statistics appear to show a continued easing following a post-holiday spike.

The state crossed that mark Monday, exactly a year after officials reported the first case of a coronavirus infection in Massachusetts. It involved a Boston resident who had traveled to the Chinese city of Wuhan, where the first cases of COVID-19 were identified.

The number of newly confirmed COVID-19 deaths in Massachusetts rose by 30 on Monday, pushing the state’s confirmed death toll to 14,317 since the start of the pandemic.

The number of newly confirmed cases of coronavirus infections increased by more than 2,200.

ANNAPOLIS, Md. — Maryland’s acting health secretary says the state’s hospitals have received less than half of their expected allocations of second doses of the coronavirus vaccine for front-line health workers this week.

Dennis Schrader on Monday attributed the discrepancy to the transition between presidential administrations in Washington.

Schrader says state officials were talked with the federal Department of Health and Human Services all weekend trying to figure out what happened. He says that “they haven’t been able to put their finger on what the issue is.”

An HHS spokesman says that “no allocations provided to states have changed or lowered.”

In a statement Monday, the Department of Homeland Security said vaccine sites will be considered “sensitive locations” and will not be targeted by Immigration and Customs Enforcement agents except in “extraordinary circumstances.”

DHS says it encourages everyone “regardless of immigration status” to get vaccinated when they are eligible under local rules.

ICE has previously included health care facilities as well as churches among the sensitive locations where arrests would generally not be carried out.

Two of the cases were found in Johnson County in eastern Iowa and one in Bremer County in northeast Iowa.

Health officials said Monday that the emergence of variant underscores the importance of wearing masks and taking precautions to avoid getting infected.

Although virus activity generally has slowed in Iowa from a peak in November, aggressive community spread is still occurring in many counties.

TORONTO — Canada most populous province is reporting its first case of a coronavirus variant first identified in South Africa that is believed to be more contagious than the original.

Ontario’s chief medical officer of health said Monday that the case was found in the Peel region west Toronto and the person does not have a known history of travel or any known contact with someone who has travelled.

Viruses constantly mutate but scientists are concerned with the emergence of three that researchers believe may spread more easily. One first reported in the United Kingdom was previously confirmed in Canada, and Ontario has dozens of cases now.

DETROIT — A Detroit-area prosecutor is dismissing more than 1,700 tickets that were issued for violating Gov. Gretchen Whitmer’s coronavirus restrictions.

Wayne County prosecutor Kym Worthy said Monday that the cases were filed before the Michigan Supreme Court said Whitmer’s emergency orders were made under a law that was unconstitutional,

Most cases — 1,632 — were misdemeanors filed in Detroit and still pending when Worthy made the announcement. Detroit police were aggressive in writing tickets for large gatherings or violations of other orders that were aimed at reducing the spread of the virus.

The prosecutor’s office says about 50 cases in suburban courts already have been resolved. Anyone who paid fines should be able to pursue a refund.

WASHINGTON — The White House is tamping down expectations for a potential boost in vaccine distribution if Johnson & Johnson’s COVID-19 shot is approved by federal regulators.

Andy Slavitt, the White House’s deputy COVID-19 coordinator, told reporters that the single-dose shot would undoubtedly help the Biden administration meet its goal of 300 million vaccinated Americans by the end of summer. But he says: “The expectation should not be that there’s an immediate, dramatic shift.”

The pharmaceutical company reported strong results for the efficacy of its vaccine on Friday and is expected to file for emergency use authorization from the Food and Drug Administration in the coming days.

Johnson & Johnson is contracted to provide 100 million doses by the end of the second quarter.

Slavitt says he did not anticipate an even distribution, but that most doses “would come towards the end of that contract.”

AMSTERDAM — The European Medicines Agency said it has begun an expedited approval process for a combination COVID-19 drug that was granted an emergency use authorization in the U.S. in November.

In a statement on Monday, the EU regulator said it has started a “rolling review” of the drug known as REGN-COV2, developed by Regeneron Pharmaceuticals and Roche. It is made of casirivimab and imdevimab, two monoclonal antibodies.

The Amsterdam-based EMA said its decision was based on preliminary results from a study that suggests the drug could reduce the amount of virus in the blood, but said “it is too early to draw any conclusions.” It said it was evaluating the first batch of data on the drug, from laboratory and animal studies and that further data from clinical trials would be assessed as they become available.

The drug was administered to former U.S. President Donald Trump when he was hospitalized with COVID-19 last year and was authorized by the U.S. Food and Drug Administration for children and adults with mild to moderate coronavirus.

LINCOLN, Neb. — Nebraska Gov. Pete Ricketts was self-isolating from the public on Monday after he was exposed to a person over the weekend who showed symptoms of the coronavirus.

Ricketts said he was near the person for longer than 15 minutes on Saturday. He had been scheduled Monday to participate in the Governor’s Annual Wellness Walk around the Capitol to promote fitness, but spoke to reporters instead through a video-conferencing link.

Ricketts said the person who showed coronavirus symptoms is getting tested for the virus and still awaiting results. He said his contact with the person, who he didn’t identify, was for business and not a social gathering.

The Republican governor was also forced to go into quarantine in November after he and Nebraska first lady Susanne Shore were exposed to an infected person during a weekend dinner gathering.

PRAGUE — The Czech Republic is not planning to limit use of the AstraZeneca coronavirus vaccine for elderly people like some other European Union nations.

Health Minister Jan Blatny says “we can see no reasons for us to think the vaccine cannot be used for people above any certain age.”

Italy is planning to administer the vaccine developed with the Oxford University for people aged 18 - 55 while German authorities don’t recommend it for those aged 65 and older.

Blatny say says vaccines in general are less effective for older people. The European Union approved the vaccine without any age limits.

GENEVA — Officials at the World Health Organization pushed back against suggestions that the U.N.-led team investigating the origins of the pandemic in China is not getting enough access or data during its ongoing visit to Wuhan.

WHO’s COVID-19 technical lead Maria Van Kerkhove said the team, comprised of experts from 10 countries, has plans to visit the Wuhan Institute of Virology, among other sites.

“We need to give them the space to be able to carry out this scientific study,” she said, in response to suggestions that China has been less than transparent about how the outbreak began. WHO’s team arrived in Wuhan last month after a months-long delay to investigate the animal origins of COVID-19.

Dr. Michael Ryan, WHO’s emergencies chief, said the agency was continuing to ask for more data and said anyone with information about how the pandemic started should share it with the organization.

TOKYO — Japanese Prime Minister Yoshihide Suga told reporters Monday that the number of new cases has decreased since early January when he placed Tokyo and 10 other prefectures under a state of emergency, but Japan needs to keep the guards up high for a while.

Suga is expected to announce an extension of the state of emergency, currently set to end on Saturday, for another month until March 7 after experts cautioned that lifting of the measures too soon would trigger a resurgence of the infections.

Suga said he will convene a taskforce meeting Tuesday to get experts’ advise before making a decision.

For months, health experts have stressed the need for fast, widespread home testing so that people can screen themselves and avoid contact with others if they have an infection. But the vast majority of tests still require a nasal swab performed by a health worker that must be processed at high-tech laboratories.

The test kit from Australian manufacturer Ellume allows users to swab themselves at home and check their status in about 20 minutes. It’s one of only three tests that consumers can use themselves, and the only one available without a doctor’s prescription.

Ellume said Monday it would use the contract to construct a U.S. manufacturing plant and deliver 8.5 million tests for federal use. It did not specify a timeframe for delivery.

Also on Monday at the White House coronavirus briefing, the head of the Centers for Disease Control and Prevention said new COVID-19 cases and hospitalizations are down in recent weeks, but three mutations that are causing concern have been detected in the U.S.

Health Secretary Carlos Mellado said the new policy will be in effect for the next four weeks.

The U.S. territory already has vaccinated more than 250,000 people, starting with medical workers and then emergency workers.

The Health Department also put a halt to vaccinations for the U.S. territory’s elections commission, saying it had not been authorized.

The department said vaccination of emergency responders will resume once the elderly have received their shots.

SARAJEVO, Bosnia-Herzegovina — Bosnian Serb health authorities say that 2,000 Russian Sputnik V vaccines have arrived in the pro-Russian, Serb-dominated half of the country, in what is the first shipment of any vaccines to the Balkan nation.

Alen Seranic, the Health Minister of Republika Srpska, which is how the Serb-run Bosnian entity is called, says the vaccines have landed in the Bosnian capital of Sarajevo for approval by the country’s medical agency.

Bosnia’s Serbs have close political ties with Russia. The second entity, run by the country’s predominantly Muslim Bosniaks and Croats, has announced first shipments of Western-made vaccines later this month.