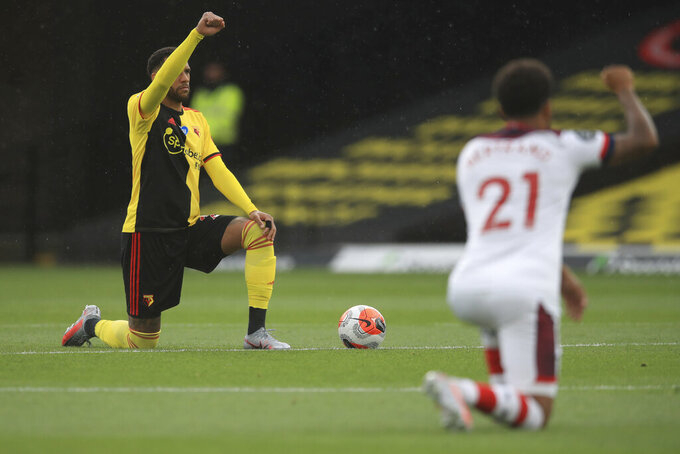 Watford's Etienne Capoue, left, takes a knee just prior to the start of the English Premier League soccer match between Watford and Southampton at the Vicarage Road Stadium in Watford, England, Sunday, June 28, 2020. (Adam Davy/Pool via AP)

West Indies head coach Phil Simmons is in self-isolation after leaving his cricket team’s bio-secure location in the English city of Manchester for a short period of compassionate leave.

Simmons attended the funeral of his father-in-law, who had died prior to the team’s recent assembly in Manchester, having been given permission by medical officials.

Cricket West Indies confirmed that Simmons has twice tested negative for the virus since returning on Friday, and will have another test on Wednesday before rejoining the squad.

The West Indies start a four-day warmup match against England at Old Trafford on Monday, prior to the start of the first test on July 8.

The Italian Winter Sports federation says that three members of the women’s ski team — two coaches and one athlete — have tested positive for the coronavirus while training on the Stelvio glacier.

The federation says that one of the coaches has been hospitalized with a mild fever. The others have no symptoms but are being quarantined.

The federation did not name those who tested positive.

While other sections of the national team will continue training, the World Cup team will return home.

Watford players Andre Gray, Nathaniel Chalobah and Domingos Quina were left out of the squad for the team's Premier League game against Southampton on Sunday.

A post on the club’s Twitter account said all three players were omitted by manager Nigel Pearson “to ensure the health and safety of all players, staff and officials at today’s game”.

A newspaper report claimed striker Gray had hosted a party at his house for around 20 people on Friday.