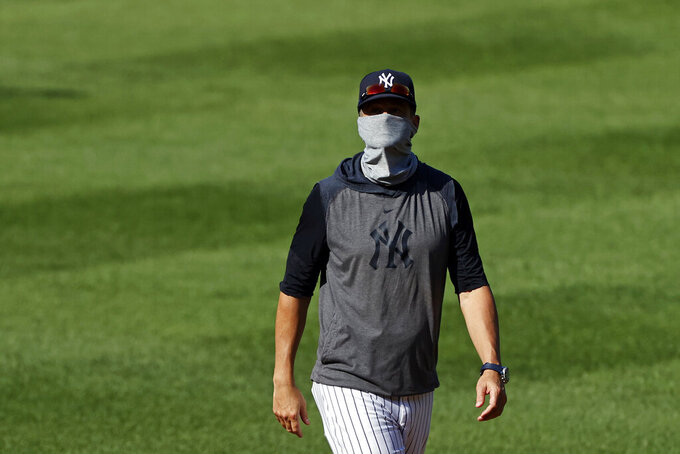 The Latest on the effects of the coronavirus pandemic on sports around the world:

Yankees All-Star infielder DJ LeMahieu and right-hander Luis Cessa tested positive for the coronavirus before traveling to New York for preseason camp and are self-isolating at home.

Manager Aaron Boone said LeMahieu was asymptomatic and Cessa had mild symptoms. He said both players gave him permission to share their diagnoses. MLB isn’t making a practice of disclosing which players test positive due to concerns about medical privacy laws.

A few other players, including closer Aroldis Chapman and catcher Gary Sanchez, did not participate in New York’s first official workout Saturday at Yankee Stadium. Boone said those players arrived to New York later than Wednesday’s report date due to travel issues, and the team is awaiting results from their intake testing.

Boone said all players who have completed the intake testing tested negative.

Former Brazil and Real Madrid coach Vanderlei Luxemburgo says he has tested positive for the coronavirus.

The 68-year-old currently coaches Brazilian club Palmeiras. The club said in a statement that Luxemburgo will stay home until he has recovered.

The coach said in a video published on his social media channels that he is asymptomatic for now.

Luxemburgo coached Brazil from 1999-2000. Spanish giant Real Madrid signed him in 2004 and fired him almost one year later, shortly after a 3-0 defeat to archrival Barcelona. Luxemburgo has won the Brazilian championship five times.

The Miami Marlins say four players have tested positive for the coronavirus, including one during this week’s screening that preceded the start of summer camp.

The other positive tests occurred earlier. The players are self-quarantining, and the team didn’t disclose their identities.

San Francisco Giants catcher Buster Posey says he's still not sure if he will play this season.

“There’s still some reservation on my end. I think I want to see kind of how things progress here over the next couple of weeks,” Posey said Saturday.

Posey said he wouldn't be surprised by any development right now, including the cancellation of MLB's planned 60-game season. The U.S. has seen a surge in new coronavirus cases with a series of daily records in recent days.

“It would be a little bit maybe naive or silly not to gauge what’s going on around you. Not only around you here but paying attention to what’s happening in the country, in different parts of the country,” Posey said. “Obviously unprecedented times right now so most definitely I’ve thought about it and talked about it with my wife quite a bit.”

Snitker said Freeman had a negative intake test before having a positive test on Friday. Snitker said the first baseman has a fever and “is not feeling great.”

“It will be a while before we can get him back,” Snitker said.

The NBA announced the schedule Saturday for scrimmages at the Disney complex, with 33 games set for between July 22 and July 28.

Each of the 22 teams that will be part of the season restart has been scheduled for three games.

All three arenas at the ESPN Wide World of Sports complex that will be used for the restart will also play host to the scrimmages.

There will be between three and six games per day during that six-day span. The season will officially resume with the start of seeding games on July 30.

Teams begin arriving at Disney for a brief quarantine followed by the start of their training camps on Tuesday.

The Indian Open golf event on the European Tour was canceled on Saturday because of the threat posed by the coronavirus pandemic.

The tournament was initially postponed from March to an unspecified time later in 2020, but has now been scrapped following consultation with the European Tour and Asian Tour.

The European Tour is due to restart this month with six straight events in Britain.

The MLS Is Back tournament match between FC Dallas and the Vancouver Whitecaps has been postponed after six FC Dallas players tested positive for COVID-19.

The group stage match was scheduled to take place Thursday. MLS officials announced the postponement Saturday and said a new time and date would come later.

FC Dallas confirmed Wednesday that players had tested positive upon their arrival in Florida for the month-long tournament. The entire FC Dallas delegation is quarantining in their rooms at the walt Disney World Swan and Dolphin Resort.

Vancouver’s team is scheduled to arrive in Orlando on Monday.

MLS said the postponement would allow both teams to have additional training days in Orlando before opening tournament play.

Frances Tiafoe has tested positive for the coronavirus and withdrawn from the All-American Team Cup tennis tournament in Atlanta.

Tiafoe was scheduled to face Tennys Sandgren on Saturday in the weekend tournament involving eight top American men’s players. The event is allowing a limited number of fans and not requiring masks, though will provide them if requested.

Tiafoe defeated Sam Querrey on Friday but was showing symptoms after the match and a test was positive.

Tiafoe, a 22-year-old who reached the 2019 Australian Open quarterfinals, left the event site and was replaced by Christopher Eubanks. Tiafoe was captain of Team Stars, playing against John Isner’s Team Stripes.

Top-ranked Novak Djokovic and three other pro players had tested positive for the virus after playing in a similar exhibition event in Europe. The pro tennis tours are suspended until August.