Latinos face barriers like fear, language in getting vaccine 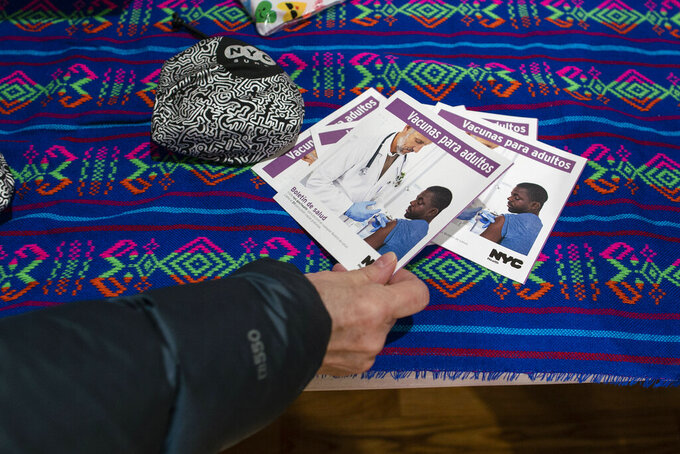 A person takes a flyer with COVID-19 information for vaccination as people visit the community center Mixteca during the coronavirus pandemic, Saturday, Feb. 13, 2021, in the Brooklyn borough of New York. From elderly Cuban Americans in Florida to farmworkers in California, Latinos face daunting barriers like fear, language and a lack of education and access as the COVID-19 vaccines roll out, creating risks for public health as the virus mutates and spreads. (AP Photo/Eduardo Munoz Alvarez)

HIALEAH, Fla. (AP) — Rigoberto Montesinos, a veteran of the Bay of Pigs invasion in Cuba, was so worried about side effects from the COVID-19 vaccine that he initially wasn't going to get it, relenting only when two friends died from the disease.

But when he finally decided to get the shot, the 82-year-old couldn't find doses where he lives in Hialeah, a Miami suburb that's about 95% Latino. He got an appointment in nearby Miami Beach, but it was canceled. After struggling for weeks, Montesinos got his first dose last week.

"At my age, and with the virus spiking, I can’t be putting myself at risk,” said Montesinos, a Cuban exile who helped try to overthrow Fidel Castro in 1961.

From elderly Cuban Americans in Florida to farmworkers in California, Latinos face daunting barriers to getting COVID-19 vaccines, creating risks for public health as the coronavirus mutates and spreads.

America’s more than 60 million Latinos — like other people of color — have been disproportionately affected by the virus, and many are struggling with issues like a lack of knowledge about the shots, state vaccine websites that don’t have Spanish instructions, ways to find appointments in their communities and fears they could be targeted for immigration enforcement.

It comes as states, cities and counties are grappling with how to ensure people of color and other underserved communities are getting the vaccine, with some targeting vulnerable ZIP codes and working with community groups to sign people up. In Arizona, where language is a barrier for some Latinos and until recently English was the only option on the state website for vaccine appointments, a university researcher is working on an online Spanish language campaign to address vaccine misconceptions.

Latinos, like other groups, also are frustrated by insufficient vaccine supplies.

Montesinos' 70-year-old nephew, Luis Morejon, was still trying to get inoculated in the Miami area last week. He's a cancer patient, and he and his wife also have diabetes.

“We’ve spent a year hiding in this home,” Morejon said.

An AP-NORC poll of U.S. adults in late January showed about half of both Hispanic and Black Americans are extremely or very worried about themselves or family members being infected with COVID-19. That's compared with about 4 in 10 white Americans.

The poll says Latinos' willingness to get the vaccine is similar to the American public overall. About 65% of Latinos said they definitely or probably will get the vaccine when it’s available to them or that they already have received at least one dose.

With a tendency for health problems like diabetes, obesity and hypertension, Latinos are one of the groups at highest risk from COVID-19 in the U.S. It’s not just a problem for them, but for public health.

“The virus doesn’t differentiate, we need to vaccinate everyone,” said Arizona State University researcher Gilberto Lopez, who's trying to debunk vaccine misconceptions in Spanish. “Otherwise, it will just keep on mutating and we’re never going to get rid of it.”

“Latinos make up a large proportion of our front-line workers. They work at supermarkets, restaurants, food industry and they are working during the day so it’s hard to find time to get vaccinated,” said Peralta, a pediatrician.

Nellie Hernández, a 73-year-old Puerto Rican, said that after surviving throat cancer and seeing friends die from COVID-19, she was relieved to get her second dose.

“I go out and run my errands, and I feel a bit more secure,” she said.

Fear of deportation can be an issue for Latinos in the U.S. without permission, though the Department of Homeland Security says vaccination sites will be considered off limits for routine enforcement.

“We know that we don’t always get the correct address and phone number when we see patients," Peralta said about those at his pediatric practice.

Some politicians say people without legal status should not be prioritized for vaccines, even equating all Hispanics, a majority of whom are American citizens or legal residents, with the fraction of people in the country illegally. U.S. Rep. Debbie Lesko, an Arizona Republican, drew criticism last week after proposing an “Americans first” vaccine policy.

Along with fears of deportation, education also can be a problem.

Advocates for Guatemalan farmworkers in Lake Worth, Florida, north of Miami, said some migrants can't read or write in any language and most lack a car or driver's license.

The Guatemalan-Maya Center there has started a list of workers who want to be vaccinated and offered its offices as a possible site, assistant executive director Mariana Blanco said.

It's important to consider demographics when setting up vaccination sites, said Tomás León, senior vice president of the Arizona-based Equality Health Foundation. He said states need to collect information about the race and ethnicity of those getting shots to ensure equal access.

“Hispanics are overrepresented in coronavirus cases and more likely to suffer worse outcomes," he said.

Many vaccination sites are far away from underserved, high-exposed communities, León said. They're often drive-thru, requiring a car.

He said community organizations can help reach Latinos in hard-hit areas like Arizona's Yuma County, where they account for two-thirds of those infected by the virus.

“As efforts to distribute the COVID-19 vaccine continue, trust and acceptance of Hispanics will be crucial," León said.

In diverse South Florida, the sprawling Jackson Health System says nearly half of the 65,000 seniors it's vaccinated as of early February identified as Hispanic.

The hospital system has partnered with 55 churches, temples and community organizations targeting seniors in low-income, minority communities who have struggled using technology to sign up for a vaccine.

“I think people feel more comfortable, especially seniors, in person, asking someone they can talk to,” Barrios said.

Torrens reported from New York and Snow reported from Phoenix. Associated Press writers Kelli Kennedy in Miami and Hannah Fingerhut in Washington contributed to this report.