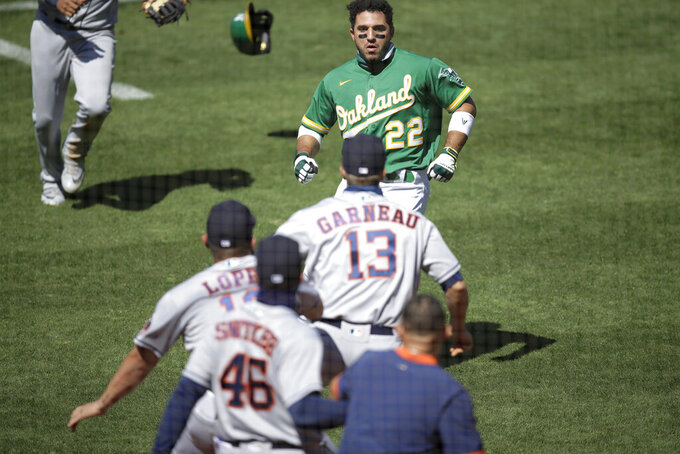 Oakland Athletics' Ramon Laureano (22) charges the Houston Astros' dugout after being hit by a pitch thrown by Humberto Castellanos during the seventh inning of a baseball game Sunday, Aug. 9, 2020, in Oakland, Calif. (AP Photo/Ben Margot) 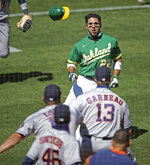 Laureano said Monday he regrets charging toward Houston's dugout to fight Cintrón after the two exchanged words during the seventh inning of a game Sunday in Oakland. Speaking before a game against the Los Angeles Angels, Laureano said Cintrón began jawing at him when Laureano reacted angrily after being hit by a pitch from Houston rookie Humberto Castellanos.

“I should have kept my cool because I wasted my time with that guy,” Laureano said. “Right now, I don’t look like a smart guy, but when you are emotional and someone says something about your mother, I don’t think anyone would take that lightly.

“Whatever decision comes about a suspension, hopefully it is not as many games as people think.”

Laureano and Cintrón are expected to be suspended by MLB, but no announcement was made Monday regarding punishment.

Houston manager Dusty Baker said he had a short meeting with his coaches to discuss the incident, but he declined to go into details about what he said to Cintrón.

“He was remorseful, I’ll say that, that the whole thing happened," said Baker, who was ejected earlier in Sunday's game and wasn't on the bench for the fracas. "And we hope it won’t happen again.”

Laureano was hit three times by Houston pitchers during the weekend series, including twice by Castellanos on breaking pitches. Laureano sarcastically motioned to Castellanos on how to properly throw his slider after Sunday's plunking. Laureano said he wasn't going to charge the mound and was trying to move on until he heard Cintrón as he approached first base.

They exchanged words in Spanish, and Cintrón emerged from the dugout and appeared to challenge Laureano to fight. Laureano threw off his helmet and sprinted toward Cintrón but was tackled by Astros catcher Dustin Garneau en route.

Players streamed from the dugouts and stands, violating social distancing guidelines amid the coronavirus pandemic. Laureano said Garneau's tackle kept the incident from intensifying further, praising Garneau for protecting his former teammate at the bottom of a building dog pile.

Melvin said he believes Cintrón was the chief culprit of the scuffle, which came amid strict rules banning players from leaving the dugouts to maintain player safety amid the pandemic.

“Ramon’s remorseful about what he did," Melvin said. "There are a lot of reasons, but my opinion is it was instigated from the other side. I know I’ve always talked to my coaches not to get on the player's case on the other side.”

“I think everyone needs to handle things differently this season. With the virus, it almost feels like we are playing against all odds to continue playing. MLB stresses that. It’s our job as coaches and managers to stress things like that."