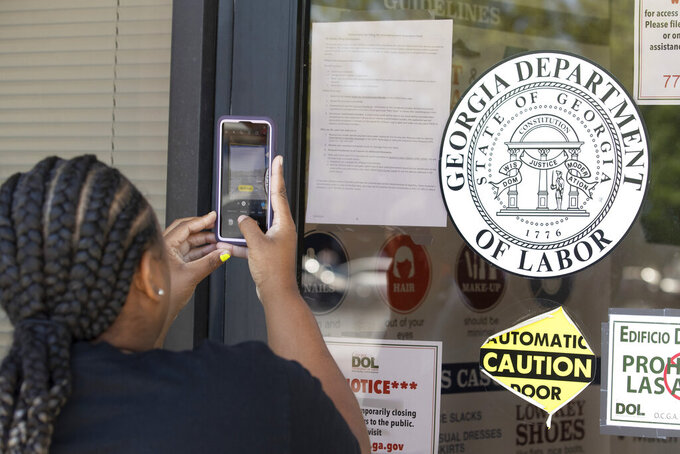 Arnashia McCain uses her phone to copy phone numbers posted on the locked doors of a Georgia Department of Labor office Thursday, May 7, 2020, in Norcross Ga. McCain, who said she drives for Lyft and has had her hours cut in her job in retail, has been unable check on the status of her her unemployment claim. (AP Photo/John Bazemore) 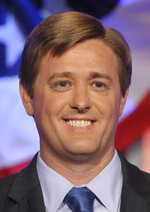 ATLANTA (AP) — Georgia lawmakers could temporarily strip the state’s elected labor commissioner of much of his authority, saying Republican Mark Butler has done too little to address a backlog of unemployment claims even as lawmakers have been inundated by complaints from constituents who say they’ve been wrongly denied jobless benefits.

The Senate Insurance and Labor Committee voted Wednesday to pass Senate Bill 156, sending it on the full Senate for more debate.

Butler reacted angrily to the bill, saying his department has hired 500 people since the pandemic began and that lawmakers don't understand how complicated the work is.

“They think this is like flipping hamburgers over here, that it's easy to do,” Butler said Wednesday after the bill was passed. He accused lawmakers of being “backstabbers," who were trying to set up a challenge to him in 2022.

The labor officer would also provide financial reports to the state’s Audit Department. The auditor complained earlier this year that the Labor Department was not providing all the information needed to complete Georgia’s annual audit, which could in turn hamper the state’s ability to borrow money.

Anger with Butler has been building among Democrats and Republicans for months, with Democratic House members holding a series of news conferences during the summer to protest his performance. Lawmakers got so many calls that they've been sending complaints electronically to the department for examination. But rules say the department can't tell lawmakers how any claim turned out, so lawmakers can't update constituents they are trying to help.

Butler denies that his office is underperforming. His department said last week that it has paid benefits to more than 1.4 million weekly claims since last March, with a backlog of 80,000 benefit eligibility decisions and appeals left to be decided. The department said it was working through that backlog at a rate of 1,500 claims a day, but Butler said 77% of appeals are being determined as ineligible.

Butler argued that a chief labor officer would not accomplish anything, saying an outside appointee won’t understand the department.

“I don't care what they pass, we're going to keep doing our job,” Butler said. “It's the dumbest idea ever. It doesn't make any common sense.”

A former lawmaker, Butler said his department has examined cases of people who have called lawmakers to complain, but says many of them are ineligible for benefits and are trying to pressure lawmakers into getting him to make improper or fraudulent payments.

“There are the people who keep calling their legislator over and over again trying to influence them to influence me.”

Butler blames lawmakers for cutting the department’s funding over the last 10 years, saying that sapped the department’s manpower in the years before the pandemic unleashed a tidal wave of unemployment claims. Since the beginning of the pandemic, he said the department has hired people using federal money, explaining that’s why he did not seek more state money this year.

“I don’t need the money now,” Butler said earlier. “The federal government has come in and given me plenty of money. The problem now is hiring and training.”

Sen. Randy Robertson, a Cataula Republican, questioned Wednesday's bill, saying it could create a conflict where two people are in charge of the department and is an improper attack on a statewide elected official.

“I think overreach is the correct phrase,” Robertson said.

But other members of the committee said Butler’s performance has been so deficient that extraordinary measures are needed.

“They may have elected a constitutional officer, but perhaps it wasn’t the right one, because these are times that people are suffering extreme situations,” said Sen. Freddie Powell Sims, a Dawson Democrat. “We want somebody there that is going to take care of the needs of Georgians.”

Other senators agreed, saying they felt Butler has been unresponsive to their concerns.

“Frankly he’s just spurned any offer we’ve had to collaborate with him and provide additional support to get this backlog resolved,” said Sen. Larry Walker, a Perry Republican.

Butler disputed that, saying that lawmakers only offered their staff, who he said would have to be trained. He said the constant criticism was sapping morale among his employees, calling it “insulting.”