Lawmakers wrap up work early on Louisiana's $38B budget bill 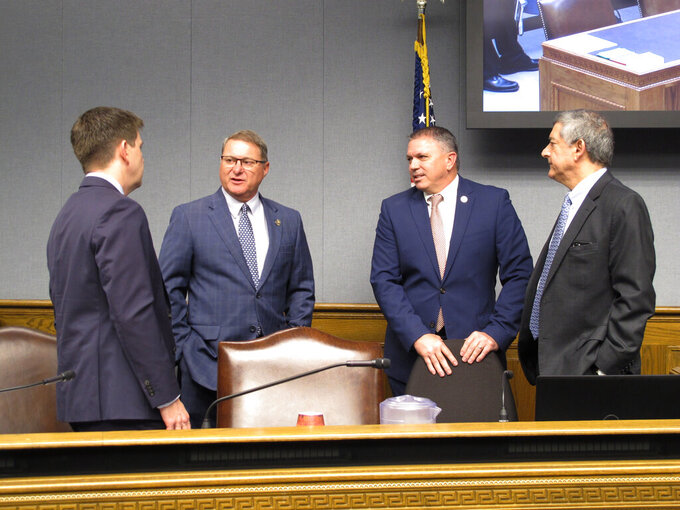 BATON ROUGE, La. (AP) — A $38 billion Louisiana state operating budget for next year flush with federal coronavirus aid won unanimous final passage Thursday from state lawmakers, who wrapped up their work on the spending plans two weeks before the end of session.

Quicker-than-usual passage of the package of budget bills could position lawmakers in the majority-Republican Legislature to try to override any line-item veto decisions of Democratic Gov. John Bel Edwards before the session shuts down June 10.

The rare, early move also demonstrates the change in Louisiana's fortunes, with lawmakers not facing the budget cut fights of prior years and instead getting to divvy up an influx of pandemic-related cash.

“We had more resources this year. We all believe at the end of the day that we did the best we could with what we had,” Republican Senate President Page Cortez said.

Hours after the Senate gave unanimous backing to the budget measures, the House agreed to the Senate version of the bills, sending them to the governor's desk. But a bill to chart the spending of $1.6 billion in federal coronavirus aid was sent to a legislative compromise committee to work out a final deal between the two chambers.

Salary hikes will go to college faculty, prison guards, juvenile justice workers and other rank-and-file state employees. Public school teachers will get an $800 pay raise, while support workers such as bus drivers and cafeteria employees will see their salaries rise by $400. That's short of earlier talk of raises reaching $1,000 and $500, however.

“We didn't get there this year,” said Finance Chairman Bodi White, the Baton Rouge-area Republican who handles the budget bills in the Senate. He suggested lawmakers would consider another round of raises next year.

Louisiana State University will be required to spend $4 million of its increase for campus lighting and security improvements amid a sexual misconduct scandal and complaints about the school's handling of safety issues.

But the budget doesn't include new dollars sought for early learning programs.

Public defenders will receive a funding boost, as will the office that works on elderly affairs. Workers who help care for people in the Medicaid program who have disabilities and live in home- and community-based settings will receive payment hikes.

The state will spend $400 million on the first year of a multiyear debt owed to the federal government for upgrades made to the flood protection system across five parishes in the New Orleans area after Hurricane Katrina.

Lawmakers also set aside millions of dollars for favored projects in their districts, such as money for fire and police agencies, local museums, parks, athletic facilities and more.

Louisiana’s tax collections are rebounding from the coronavirus outbreak. Lawmakers had a surplus from last year to spend, along with better-than-expected tax collections from this year and billions in federal cash.

Still awaiting a final agreement between the House and Senate is a spending plan for about $1.6 billion in federal coronavirus aid.

Under the Senate proposal, the federal dollars would be split among a list of programs and projects, including water system improvements, tourism marketing, hurricane recovery and grant programs for nonprofit agencies, ports, the logging industry and movie theater operators. One-third of the cash, $563 million, would pay for road and bridge work. Another $490 million would go to the state’s nearly bankrupt unemployment trust fund.

Most of the spending priorities sought by Edwards were included in the budget.

The budget is balanced with at least $720 million in short-term cash that isn’t expected to be available in later years, including $600 million in enhanced federal Medicaid money available because of the pandemic.

Combined with other budget measures, the state will spend more than $43 billion on programs and services in the 2021-22 financial year. Spending on legislative and judicial operations will grow larger, and judges will get another year of a multiyear pay raise.