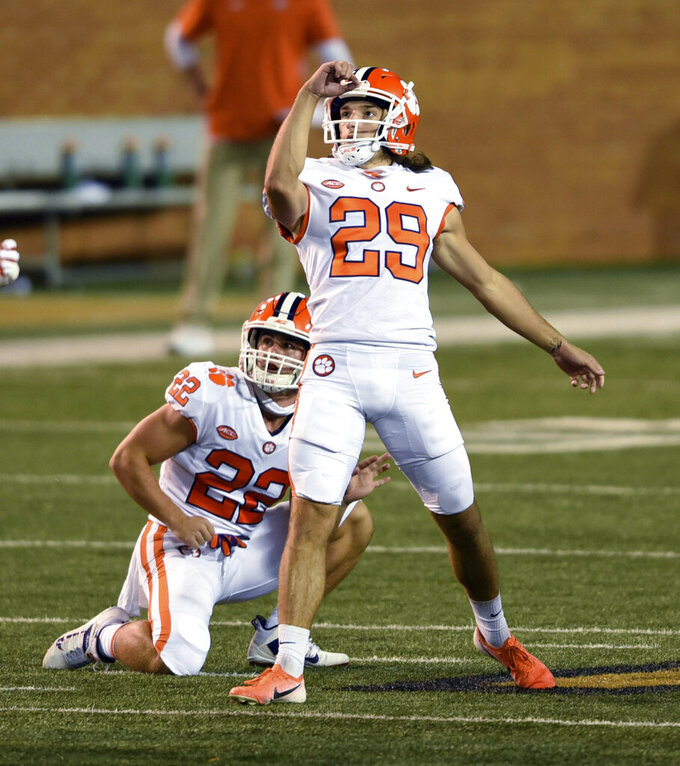 Clemson's B.T. Potter watches his 52-yard field goal at the end of the first half against Wake Forest in an NCAA college football game Saturday, Sept. 12, 2020, in Winston-Salem, N.C. (Walt Unks/The Winston-Salem Journal via AP) 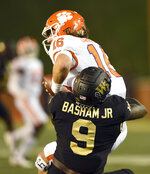 WINSTON-SALEM, N.C. (AP) — Trevor Lawrence threw for 351 yards and combined for three touchdowns, and No. 1 Clemson continued its domination of Wake Forest with a 37-13 victory on Saturday night in the season opener for both teams.

Trevor Etienne ran for 102 yards and a touchdown for Clemson, which improved to 70-5 since the start of the 2015 season under coach Dabo Swinney.

Clemson has now outscored Wake Forest 152-19 over the last three seasons, holding the Demon Deacons to just one touchdown.

Clemson is looking to win its sixth straight Atlantic Coast Conference title and reach the College Football Playoff national championship game for the fifth time in the six seasons. The last time the Tigers were on the field they lost 42-25 loss to LSU in which Lawrence was held without a touchdown pass.

But the Heisman Trophy hopeful looked in solid form against the Demon Deacons.

After going three-and-out on its first drive, Clemson scored on its next three possessions, including a pair of short walk-in touchdowns by Lawrence to take a 17-0 lead. On both occasions, the Demon Deacons sold out on the fake handoff to Etienne, allowing Lawrence a free path to the end zone.

Lawrence's passes were on the mark for the most part, as he completed 22 of 28 passes. He spread the ball around to eight different receivers in the first half alone as Clemson took a 27-0 lead.

Wake Forest quarterback Sam Hartman was 11 of 21 for 182 yards passing and was sacked four times before being replaced in the fourth quarter. Taylor Morin had nine catches for 93 yards and a touchdown.

The game was played in front a near empty stadium, with the exception of about 50 family members of senior and junior Demon Deacon players to comply with North Carolina state COVID-19 rules.

Wake Forest’s school’s band and cheerleaders were stationed on the side hill behind one of the end zones, socially distanced from each other. Wake Forest showed its fans cheering virtually on the scoreboard while ambient crowd noise was pumped in. Both coaches wore masks on the sideline.

Wake Forest: The Demon Deacons really struggled with tackling. Coach Dave Clawson didn’t begin full-contact practices until about three weeks ago because he didn't feel good about risking players' health until he was sure there'd be a season. It's not easy to tackle Etienne anyway, but Wake Forest will need to do a better job of wrapping up.

Clemson: The Tigers lost Tee Higgins to the NFL draft and Justyn Ross to a season-ending injury, but their new wave of receivers appears decently talented. It's still unclear who'll emerge as the leader of this group. Amari Rodgers led the way against Wake Forest with five catches for 90 yards, but dropped a wide open pass in the back of the end zone before colliding with the goalpost.

The Tigers looked very much like the No. 1 team in the country.

Clemson: Hosts The Citadel on Saturday in home opener.