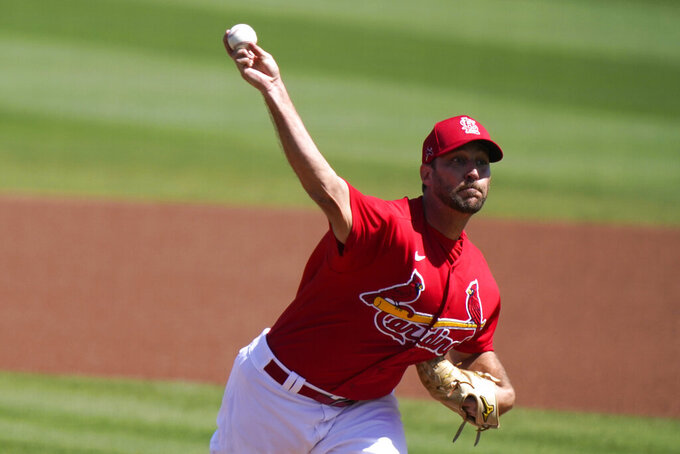 Major League Baseball needs to find a new home for this summer's All-Star Game after announcing it would be pulled from Atlanta's Truist Park. The move was a response to Georgia enacting a new law last month that critics say is too restrictive of voting rights.

The game was scheduled for July 13 and was to include a salute to late Braves star Hank Aaron. MLB said the tribute still will be held.

Milwaukee Mayor Tom Barrett has sent a letter to Commissioner Rob Manfred lobbying for his city to host the game, saying: “It is a particularly appropriate location to honor Hank Aaron who is a revered and beloved former Milwaukeean.”

Matt Harvey gets another fresh beginning, this time with the Baltimore Orioles. He's scheduled to start against the Red Sox at Fenway Park.

The 2013 NL All-Star was one of the game’s best young pitchers for the New York Mets early in his career, but that success was derailed by injuries and ineffectiveness.

The right-hander bounced between the Reds, Angels and Royals after leaving the Mets but has mostly struggled. The 32-year-old made the Orioles’ roster after signing a minor league deal during the offseason and will make $1 million this season.

Harvey will try to keep the Orioles perfect for the 2021 season. John Means threw seven scoreless innings as the Orioles beat the Red Sox 3-0 on Friday.

The entire season-opening, three-game series between Washington and the New York Mets has been called off because of a COVID-19 outbreak on the Nationals. The 2019 World Series champions had four players test positive for the virus and another five quarantining after contact tracing.

That means the earliest either team could play is on Monday. Washington is scheduled to host the Atlanta Braves while the Mets will travel to face the Philadelphia Phillies. The Nationals could be down more than a third of their planned 26-man roster.

Two of the oldest players in the big leagues take the mound on Saturday.

Adam Wainwright turns 40 years old later this summer but is still an important piece of the rotation for the St. Louis Cardinals. The three-time All-Star has won 167 career games and was very good in 2020, when he finished with a 5-3 record and 3.15 ERA. He makes his season debut against the Reds in Cincinnati.

And 41-year-old Rich Hill will be on the bump for the Tampa Bay Rays against the Marlins in Miami. The left-hander had a 3.03 ERA for the Minnesota Twins last season in eight starts.

Joe Musgrove debuts with his hometown team when the San Diego Padres go for their third straight victory over Arizona to begin the season. Musgrove was obtained from Pittsburgh on Jan. 19. The right-hander attended Grossmont High in suburban El Cajon and wears No. 44 in honor of his favorite Padres pitcher, Jake Peavy. San Diego first baseman Eric Hosmer is coming off consecutive games with a homer, three hits and three RBIs.

Kohei Arihara gets his first major league start for the Texas Rangers when they visit the Kansas City Royals.

The 28-year-old right-hander signed a $6.2 million, two-year contract after six seasons in Japan and earned a spot in the Rangers' rotation. He had a 3.86 ERA in four spring starts while striking out 11 and walking just one over 14 innings.