LEADING OFF: A's back in action after 4 virus postponements 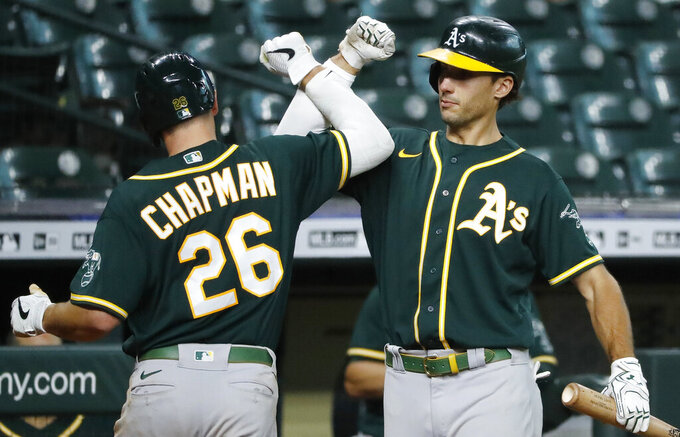 Oakland Athletics' Matt Chapman celebrates with Matt Olson after hitting a home run against the Houston Astros during the fourth inning of the second baseball game of a doubleheader Saturday, Aug. 29, 2020, in Houston. (Kevin M. Cox/The Galveston County Daily News via AP)

The AL West-leading Athletics play for the first time since last Saturday, when they were swept in a doubleheader at Houston. Oakland returns to the Coliseum as Jesús Luzardo (2-1, 3.74 ERA) faces Fernando Tatis Jr. and the Padres.

A’s pitcher Daniel Mengden has tested positive for the coronavirus and is quarantined at home in Houston, where he received the result that forced Oakland and Major League Baseball to postpone four games this week. General manager David Forst said Mengden is asymptomatic and was placed on the 10-day injured list.

Cubs right-hander Yu Darvish (6-1, 1.47 ERA), the NL Pitcher of the Month in August, tries to win his seventh straight decision when he faces Jack Flaherty (2-0, 1.93) and the Cardinals at Wrigley Field.

The Astros will see how second Jose Altuve’s knee is feeling, a day after he made an early exit.

Altuve was replaced Thursday a couple innings after sliding hard into third base. The team said he had discomfort in his right knee and would get an MRI. The All-Star is struggling this season, batting just .224.

Bryan Reynolds came up with his own celebration when he doubled for the Pirates in his first at-bat since coming off the paternity list -- he pretended to rock a baby to sleep.

Reynolds later hit a three-run homer as Pittsburgh beat the Cubs 6-2 on Thursday. On Monday, Reynolds and wife Blair had their first child, son Reese.