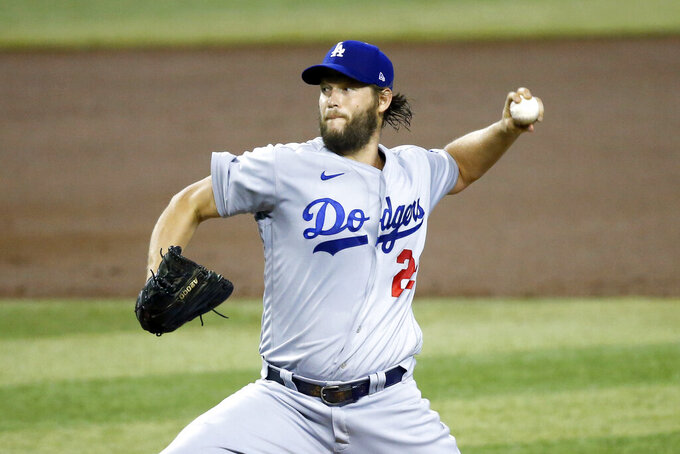 A look at what's happening in the majors today:

Gerrit Cole tries for his 20th straight regular-season win when he pitches for the Yankees at Tampa Bay. Cole is 3-0 with a 2.55 ERA in three starts since signing a $324 million, nine-year contract with New York.

Cole’s streak dates to May 2019 with Houston and is the sixth-longest in big league history. Hall of Famer Carl Hubbell leads the list with 24 in a row, followed by Roy Face (22) and Roger Clemens, Jake Arrieta and Rube Marquard tied at 20. Cole lost the World Series opener last year when Washington beat the Astros.

Tyler Glasnow pitches for the Rays at Tropicana Field. He’s 0-0 with a 3.12 ERA in two starts.

The Marlins have rapidly become the most surprising team in the majors and now try for their seventh win in a row when they take on the Mets at Citi Field.

Miami is 5-0 since missing more than a week because of the team’s coronavirus outbreak, and is 7-1 overall.

The Marlins keep winning despite already using 43 players, including 25 pitchers, to maintain a full roster amid COVID-19 concerns. Miami was 57-105 last year.

Clayton Kershaw was supposed to start on opening day at Dodger Stadium against Giants right-hander Johnny Cueto, but got scratched shortly before opening day because of back trouble. Kershaw and Cueto now are set to match up again in Los Angeles.

Kershaw looked every bit a three-time NL Cy Young Award winner in his first start this year, shutting out Arizona on three hits over 5 2-3 innings while striking out six without a walk. Cueto has started this season with three straight no-decisions and a 4.97 ERA.

The Phillies and Braves began their series at Citizens Bank Park after a rainout, then will play a doubleheader Sunday.

Bryce Harper and the Phils split a pair of seven-inning games with the Yankees on Wednesday. They still have six more twinbills on their schedule, including this weekend, in the virus-shortened 60-game schedule.

The Cardinals will have to wait even longer to resume the season. Their weekend series at Busch Stadium against the Cubs was called off after two more St. Louis players and a staff member tested positive for the coronavirus.

Paul Goldschmidt and the Cards have been off since a week ago Friday, when two players returned positive coronavirus tests. Eight players in total have tested positive, including star catcher Yadier Molina.

The Cardinals already were scheduled to play three doubleheaders against Milwaukee to make up for games postponed last week.

St. Louis is next scheduled to play Monday at home against Pittsburgh. The Cubs next play Tuesday at Cleveland.