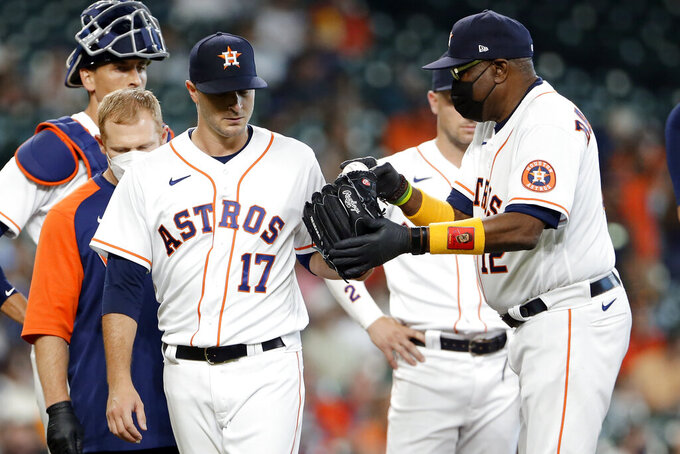 Houston Astros starting pitcher Jake Odorizzi (17) hands the ball off to manager Dusty Baker Jr. (12) as he leaves the mound with an injury on the second batter of the first inning of a baseball game agains the Los Angeles Angels Saturday, April 24, 2021, in Houston. (AP Photo/Michael Wyke)

A look at what's happening around the majors on Sunday:

BAKER'S DOZEN IN THE BOOKS

Oakland goes for its 14th consecutive victory when the Athletics take on Baltimore at Camden Yards. Jesús Luzardo (1-1, 5.89 ERA) is on the mound as the A’s look to complete a three-game sweep.

This is the third-longest winning streak in Oakland history. The A’s won 14 straight in 1988 and set a then-American League record with 20 consecutive victories in 2002.

Cleveland broke that mark with 22 straight wins in 2017 — Oakland’s string is the longest in the majors since that Indians run.

The Athletics, who lost their first six games this season, have outscored opponents 83-36 during the winning streak.

John Means (1-0, 1.52) starts for the Orioles after getting an additional two days of rest following seven shutout innings Sunday at Texas in his last outing. Oakland has won nine in a row against Baltimore dating to 2019.

Houston second baseman José Altuve says he tested positive for COVID-19 but hasn’t felt ill and hopes to return to the lineup soon.

The 2017 AL MVP was among five Astros who were placed on the COVID-19 list on April 14. The four other players were back on the active roster within a few days.

It’s unclear how much time Altuve will need before playing again. He said he received the first dose of one of the two-dose COVID-19 vaccines before testing positive, and that he has no idea how he contracted the virus.

Altuve is hitting .318 with one homer, three doubles and five RBIs in 11 games.

Hours after Altuve spoke, Houston starter Jake Odorizzi was forced to leave after throwing only five pitches against the Angels because of tightness in his right forearm.

Odorizzi got a late start to the season after not signing with the Astros until March 8. He entered the game with an 0-2 record and 10.57 ERA in two starts this season.

An All-Star in 2019 with Minnesota, Odorizzi was looking to bounce back from an injury-plagued 2020 season when he pitched just 13 2/3 innings.

Star outfielder Christian Yelich is returning to Milwaukee for an MRI on his strained lower back. The 2018 NL MVP hasn’t played since April 11 and was eligible to come off the injured list this weekend against the Cubs at Wrigley Field.

“We’re just at a plateau, and so we’re just trying to rule everything out and see if we can get any new bit, just another piece of information,” Brewers manager Craig Counsell said. “It’s frustrating for Christian.”

Yelich is batting .333 with one homer and six RBIs in nine games this season.

HOPE TO SEE YA AGAIN

The Braves sent Sean Kazmar Jr. to their alternate training site, a week after the infielder returned to the majors for the first time since 2008.

The 36-year-old Kazmar became an instant feel-good story when Atlanta brought him up to the big leagues. Kazmar hit .205 in 19 games for San Diego when he debuted 13 years ago, and had been in the minors since then.

Kazmar got into two games for Atlanta and batted just once -- he grounded into a double play against the Cubs at Wrigley Field and was a pinch-runner at Yankee Stadium.

Kazmar lost his roster spot when the Braves reinstated lefty Drew Smyly from the injured list to start Saturday night against Arizona. The game got rained out, and the Braves and Diamondbacks are now scheduled for a doubleheader.

The Padres and Dodgers wrap up their four-game series in prime time with the seventh meeting already this season between the NL West foes.

“It’s the biggest rivalry in baseball,” San Diego shortstop Fernando Tatís Jr. said after hitting two homers in Friday night’s victory. “Everybody can feel it. Everybody can see it.”

Joe Musgrove (2-2, 1.04 ERA) is 0-2 since pitching the first no-hitter in Padres history for his hometown team April 9 at Texas. He’s coming off a career-high 13 strikeouts over seven innings Monday in a 3-1 loss to Milwaukee.

Dustin May (1-1, 2.93) gets the ball at Dodger Stadium for the defending World Series champions, who are missing injured slugger Cody Bellinger and several other regulars.

The Miami Marlins’ minor league complex in Jupiter, Florida, was shut down for the weekend after five players tested positive for COVID-19, a club spokesman said.

The stricken players were isolated. About 120 players train at the complex.

The interruption in workouts is not expected to affect the start of the season for any of the Marlins’ four full-season affiliates — the Triple-A Jacksonville Jumbo Shrimp, Double-A Pensacola Blue Wahoos, Class A Beloit Snappers and Class A Jupiter Hammerheads. Their seasons begin May 4.