LEADING OFF: Opening day in DC, Dodger Stadium amid pandemic 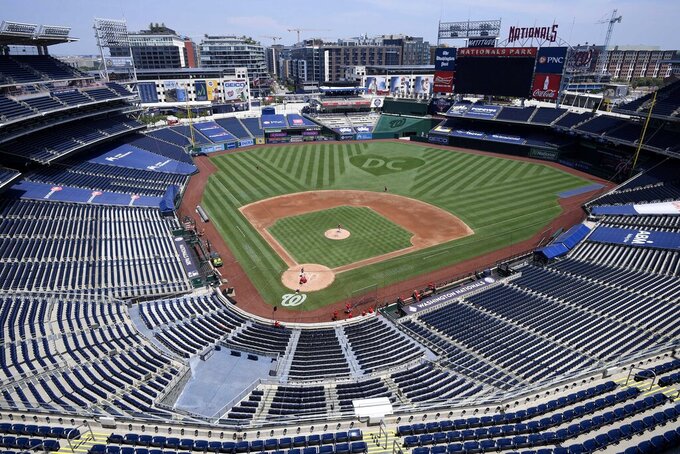 This opening day doubleheader begins the most unusual year in the history of Major League Baseball. Teams will play 60 games in ballparks without fans, with a whole new set of rules and safety protocols. Sound effects will be piped into stadiums and cardboard cutouts will occupy many seats.

To start a season so deeply affected by the virus outbreak, the World Series champion Nationals will have Dr. Anthony Fauci, the nation’s top infectious disease expert, toss out the ceremonial first ball.

New San Francisco manager Gabe Kapler and several of his players knelt during the national anthem before an exhibition game this week. He said everyone on the Giants would be supported by the team no matter what they chose to do.

“So I told them that I wanted to use my platform to demonstrate my dissatisfaction with the way we’ve handled racism in our country. I wanted to demonstrate my dissatisfaction with our clear systemic racism in our country and I wanted them to know that they got to make their own decisions and we would respect and support those decisions. I wanted them to feel safe in speaking up,” he said.

Kapler, one of 10 new managers in the majors this season, said some of the Giants reached out to other organizations about their plans.

A Black Lives Matter stencil can be put on pitcher's mounds throughout the majors during the opening weekend. MLB players can put a patch with “Black Lives Matter” or “United For Change” on a jersey sleeve during opening day.

Star outfielder Mookie Betts debuts in Dodger blue, a day after getting a 12-year, $365 million contract with his new team. The 27-year-old Betts helped beat the Dodgers in the 2018 World Series when he was the AL MVP for Boston.

Popular outfielder Hunter Pence returns to the Giants after a year in Texas. Infielder Starlin Castro, a solid .280 hitter in 10 major league seasons, joins the Nationals.

Giants catcher Buster Posey is among a dozen or so players who have opted out of playing this season because of coronavirus concerns. The six-time All-Star, three-time World Series champion and 2012 NL MVP and his wife have adopted identical twin girls who were born prematurely.

The experiment with designated hitters at National League fields will begin with the games at Nationals Park and Dodger Stadium. The debate over the DH raged for decades — now it’s been settled, at least for this year. Pencil ’em in, skip.

Also, relievers must face at least three batters, or pitch until the end of an inning. So no bringing in a side-winding southpaw just to handle a lefty slugger.

Plus, the really big change: Every half-inning starting in the top of the 10th will begin with an automatic runner on second base. Bunting, speedy pinch-runners, a whole lot of things are in play. Not that a lot of fans are thrilled with this idea, by the way.