Leading in pandemic becomes part of audition for Biden's VP 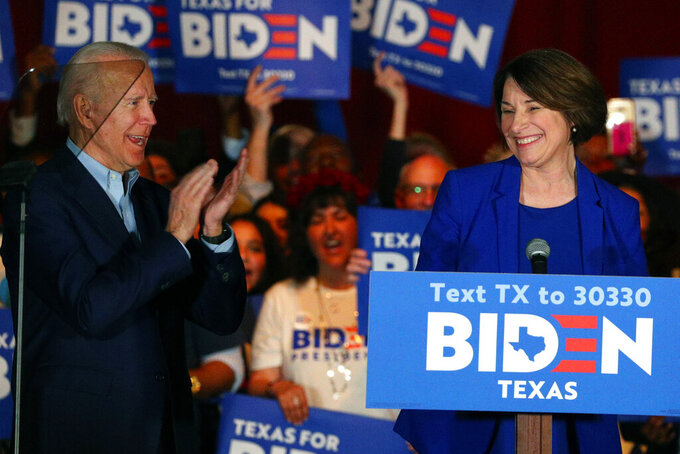 FILE - In this March 2, 2020 file photo, Sen. Amy Klobuchar, D-Minn., endorses Democratic presidential candidate former Vice President Joe Biden at a campaign rally Monday, March 2, 2020 in Dallas. As presumptive Democratic presidential nominee Joe Biden begins the process of choosing a running mate amid the coronavirus crisis, managing the pandemic has become its own version of an audition. For potential picks, lobbying for the job means breaking into the national conversation, positioning themselves as leaders and executing at their day job. (AP Photo/Richard W. Rodriguez)

Minnesota Sen. Amy Klobuchar has been praising the former vice president on television and Twitter as she unveils a plan to fight the coronavirus in rural America.

Michigan Gov. Gretchen Whitmer went on “The Daily Show” to plead for help addressing the pandemic while wearing a T-shirt with a jab at President Donald Trump.

As Biden begins the process of choosing a running mate, responding to the COVID-19 pandemic has become an unexpected part of the audition. The women believed to be top candidates are competing for the job by trying to show off their leadership on issues thrust into the spotlight by the virus.

That’s easier for some than for others. The coronavirus has put politics on the back burner for many. Rallies and fundraisers — where potential vice presidential candidates might essentially audition for the position — are barely happening. Meanwhile, governors in the running might seem to have an advantage as their official day job becomes a public test of their ability to handle a crisis in the spotlight.

“Everything has changed, and this time calls for a No. 2 who can project confidence to voters that they can manage a pandemic,” said Adrienne Elrod, a Democratic strategist who was a senior adviser to Hillary Clinton's 2016 presidential campaign. “If you can show that you’re doing that effectively, that makes you a more attractive choice, obviously.”

There is only so much a potential running mate can do to influence a decision that ultimately comes down to who the candidate believes is the right choice. Biden has said he'll pick a woman. He may consider whether a senator hails from a state with a Democratic governor to ensure her replacement in the Senate would be from the same party.

But he also has stressed he's looking for someone who's “ready to be president on a moment’s notice.”

Biden is expected to unveil his vetting committee next week, delaying his initial schedule of this week to avoid taking attention away from several high-profile endorsements, including from former President Barack Obama.

Almost all have said they are “flattered” or “honored” to be mentioned as likely short-listers but are focused on the pandemic. Warren said on MSNBC she would accept the VP job if Biden offered it to her. Abrams, the former minority leader of the Georgia House of Representatives, told Elle magazine she would be “an excellent running mate,” noting she has a record of executive management and, as an African American woman, could motivate “typically ignored communities."

Harris has launched a campaign of sorts to shine light on the disproportionate effect the coronavirus has had on black Americans. In recent weeks, she’s talked with prominent black radio hosts and commentators Steve Harvey, Roland Martin, Zerlina Maxwell and Joe Madison and participated in a coronavirus town hall hosted by Sean “Diddy” Combs on the rapper-producer's Revolt TV.

A Harris adviser said the senator, the lone Democratic black woman in the Senate, is using her platform to highlight the racial disparities of the pandemic. The media blitz comes after a presidential campaign in which she had trouble connecting with many black voters, especially some of the young black progressives skeptical of Biden. As many Democrats pressure Biden to select a black woman as his running mate, it would make sense for Harris to shore up any potential weaknesses there.

Klobuchar has been trying to show the Biden campaign that she's a good teammate since she dropped her presidential bid and endorsed him ahead of the March 3 Super Tuesday contests, just in time to help him win her home state of Minnesota. She campaigned for him in states including Michigan and has been promoting him on television and social media while pushing issues such as vote by mail, which she says would allow people to safely vote in November.

On Thursday, Klobuchar released a plan to prepare for and respond to the coronavirus in rural areas, where COVID-19 has been slower to spread but where there are more older people and health care systems are less equipped to handle a surge in cases. Klobuchar has touted her record of winning in rural, typically more conservative areas and still sees her knowledge of rural issues as a point in her favor as a vice presidential pick.

Biden’s team sees Whitmer, one of his campaign co-chairs in a top battleground state, as consciously trying to be viewed as a serious contender. First, that means doing her job well in Michigan but also leveraging her role in national media. She’s already shown an ability to handle criticism from Trump, whose leadership during the pandemic she has criticized. After Trump referred to Whitmer as “that woman from Michigan,” she appeared on “The Daily Show” wearing a T-shirt with the four-word description on it.

Warren notably didn't endorse Biden until Wednesday, more than a month after she dropped her presidential bid. But when asked Wednesday on MSNBC whether she would serve as Biden's vice president if asked, she said yes.

Warren has noted she released a plan to help fight pandemics on Jan. 28, well before Biden or any other presidential candidate. She also founded an activist group she’s dubbed Warren Democrats. She's attempting to tap her sizable national collection of mostly small, online donors with an eye to boosting her Senate reelection campaign in 2024 — especially after she finished third in her home state during the presidential race — but also to elect Democrats “who share our vision."

Barrow reported from Atlanta. Associated Press writer Will Weissert contributed to this report from Washington.