Leaner version of Jokic ready to carry load for Nuggets 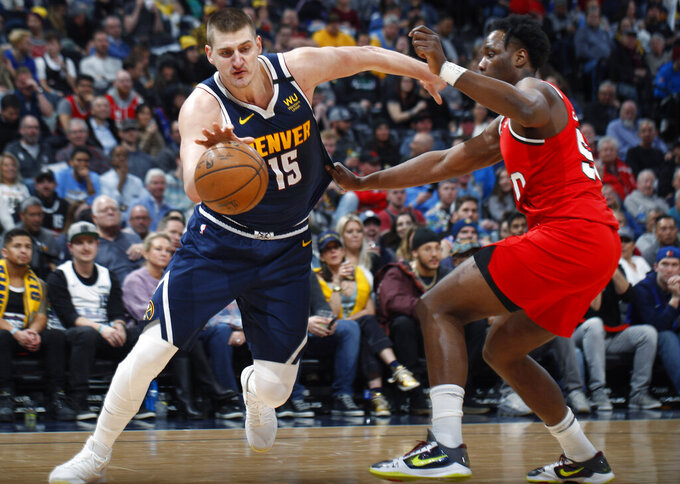 The pictures on social media over the break revealed a leaner, more svelte-looking version of Nikola Jokic.

Naturally, inquiring minds wanted to know: How much weight did the Denver Nuggets star actually drop while home in Serbia?

“I’m not supposed to tell you my pounds and my weight,” joked the 7-foot center who was a late arrival in Lake Buena Vista, Florida, for the NBA's relaunch after testing positive for the coronavirus. “It’s a team policy. I like that.”

Pound for pound, whatever that may currently be, he’s one of the top centers in the league. Maybe even point guards, for that matter.

He doesn’t play like your typical big man. His vision and passing make him that much more difficult to defend, whether he’s at 284 pounds (his weight before the hiatus) or his new sleeker weight. Now that he's arrived at Walt Disney World, he’s eager to carry the load as the Nuggets return to the court in possession of the No. 3 seed in the Western Conference.

“He was playing at an All-NBA, first-team level prior to the league being suspended,” coach Michael Malone said. "He just continued that over the break. He looks great.

“I expect him to play the way he was playing prior to the league being suspended and come out and play at a very, very high level. He’s the best center in the NBA. Why wouldn’t he?”

Time and again, the player nicknamed “Joker” has come up clutch for the Nuggets this season — hitting four game-winners in addition to recording 12 triple-doubles.

And while his unique brand of hoops isn't new to those around the league, the rest of the world caught a big glimpse of it during the 2018-19 playoffs. Jokic averaged 25.1 points, 8.4 assists and 13 rebounds as the Nuggets beat the San Antonio Spurs in seven games before falling to Portland in seven.

“Maybe I’m going to surprise everybody. Maybe I’m not going to be good. So we will see,” Jokic said. “I’m just happy to be here, to finally come to Orlando to be with the team.”

Jokic said he was surprised his COVID-19 test came back positive in late June. The result was the same day that another top Serbian athlete — Novak Djokovic, the world’s top-ranked men’s tennis player — revealed that he and his wife had tested positive for the virus. Djokovic and Jokic were together at an event earlier in June, though it can't be concluded it played in a role in the positive test of either athlete.

Malone has been working with a short-handed group while in Florida. The team recently had Torrey Craig and Gary Harris arrive at the bubble and will soon have back Michael Porter Jr.

The absences has given Malone a chance to get creative with his lineups. He may use 7-foot-2 rookie Bol Bol, who’s available after not playing in an NBA game this season.

After a win over Detroit on Feb. 25, the Nuggets were 40-18 — matching their best 58-game start in their NBA history. But they hit a skid and went 3-4, including a loss in Dallas on March 11 that was the NBA's final game before the league was shut down.

“When the season ended, we were not really good,” Jokic said. “It's basically a new season. We need to start over.”

Jamal Murray and the Nuggets are bonding over more than just basketball. They’re hitting the driving range, the swimming pool and even p laying some tag. Murray also hosted a recent team breakfast. They’re banking on their chemistry to help them make a run.

The team discussed the legacy of civil rights leader John Lewis prior to practice over the weekend. Malone also sent along a link to the Lewis documentary “Good Trouble.”

“We realized we lost a great freedom fighter and all he accomplished,” Malone said. “We wanted to talk and get to know him a little more.”

The 7-2 Bol — with a 7-7 wingspan — certainly made quite a splash by scoring 16 points and grabbing 10 rebounds in Denver’s first scrimmage game against Washington.

A second-round pick out of Oregon (by Miami with his rights sent to Denver on draft night), Bol was limited to a handful of games this season in the G League as he dealt with a left foot ailment. He’s the son of Manute Bol, the former NBA center.

Asked if his performance against the Wizards was the start of proving everyone wrong after falling in the draft, Bol responded: “I hope so.”