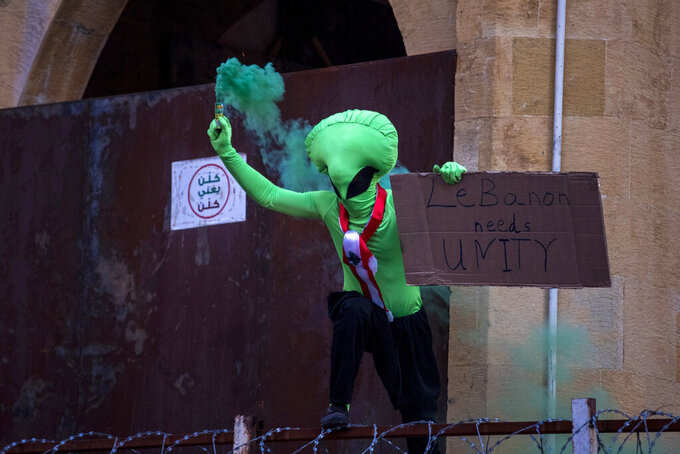 An anti-government protester holds lit flares while shouting slogans during a protest against the rising prices and worsening economic and financial conditions, in Beirut, Lebanon, Friday, March 12, 2021. Lebanon’s parliament on Friday approved a $246 million loan from the World Bank that would provide cash assistance for more than 160,000 families in the small country hit by an unprecedented economic crisis and the coronavirus pandemic. The Arabic on the wall reads "All means all." (AP Photo/Hassan Ammar)

BEIRUT (AP) — Lebanon’s parliament on Friday approved a $246 million loan from the World Bank that would provide cash assistance for more than 160,000 families in the small country hit by an unprecedented economic crisis and the coronavirus pandemic.

The approval came as the local currency hit a new record low on the black market, trading 11,150 Lebanese pounds to the dollar. The new crash triggered immediate protests, mostly in the country's north.

The previous day, France warned that Lebanon was running out of time before total collapse, blaming bickering politicians who for months have been unable to agree on a new government even as Lebanon slides into economic and financial abyss.

Last week, protesters closed roads around the country with burning tires for a week, after the dollar hit 10,000 pounds on the black market for the first time. The currency collapse throws more people into poverty as their purchase power declines.

The currency crash will affect recipients of the cash from the World Bank, as the money will be distributed to the 161,257 families — or about 800,000 people — in Lebanese pounds. Each of the families will get 800,000 pounds a month for one year, according to the agreement with the World Bank that calculated the dollar at 6,240 pounds.

Since Lebanon’s economic and financial crisis began in late 2019, there have been different exchange rates for the dollar in the highly-indebted country, including the official rate with about 1,500 pounds to the dollar, the black market rate, and a cash withdrawal rate from U.S. dollar accounts in local banks, with at 3,900 pounds for $1.

Using the rate of 6,240 pounds to the dollar in helping poor families means they are being short-changed, getting about 62% of what they would be getting on the black market rate.

Lawyer and anti-corruption activist Nizar Saghieh slammed it as another tax on the poor. “It is being imposed not on the richest but the poorest,” he wrote.

The economic crisis has led to a projected 19.2% decline in gross domestic product, triple-digit inflation and is pushing 1.7 million people below the poverty line. Some 22% of the population is expected to fall into extreme poverty.

Lebanon has a population of 6 million people, including a million Syrian refugees.

International donors have said they will not give Lebanon financial assistance before major reforms are implemented to fight corruption, which has brought the tiny Arab country to near bankruptcy. The deepening crisis has depleted foreign reserves in import-dependent Lebanon and raised concerns that the Central Bank will end subsidies of some basic commodities.

According to a World Bank statement in January, the significant portion of the loan — nearly $200 million — will go toward providing cash assistance to around 786,000 individuals through a pre-paid electronic card.

The loan also includes school fees for some 87,000 children between the ages of 13 and 18. It will also help Lebanon develop a social registry to determine who would need assistance in the future.

Meanwhile Friday, hundreds of people marched through Beirut demanding a transitional government that would work on getting Lebanon out of its crisis.

Lebanon’s government resigned in August following a massive blast at Beirut’s port that killed 211 people, wounded more than 6,000 and damaged entire neighborhoods in the capital.

Disagreements between President Michel Aoun and Prime Minister-designate Saad Hariri have so far delayed the formation of a Cabinet. Hariri was chosen for the post in October.