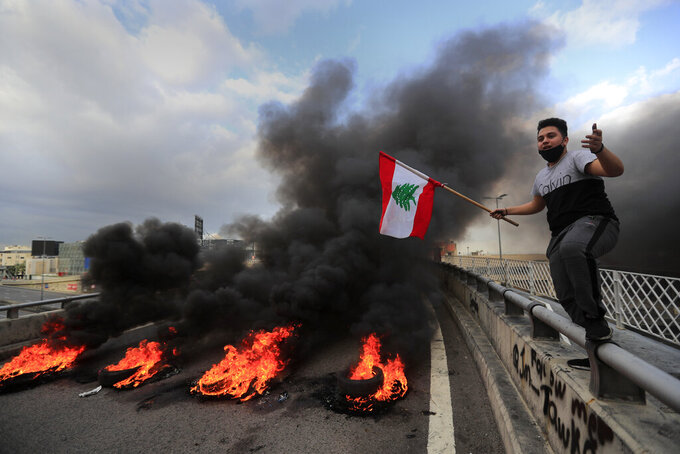 A protester waves a Lebanese flag near burning tires set to block a main highway, during a protest in the town of Jal el-Dib, north of Beirut, Lebanon, Monday, March 8, 2021. The dayslong protests intensified Monday amid a crash in the local currency, increase of consumer goods prices and political bickering between rival groups that has delayed the formation of a new government. (AP Photo/Hussein Malla)

BEIRUT (AP) — Lebanon’s army chief warned Monday that soldiers are hurting from the severe economic crisis engulfing the country, voicing rare criticism from the military of a ruling class that has done little to try and resolve a monthslong political deadlock.

The protests come against the backdrop of a crash in the local currency, an increase of consumer goods prices and political bickering between rival groups that has delayed the formation of a new government. Lebanon's currency has lost 85% of its value in the past year and a half.

In a rare statement, Aoun said the financial and economic crisis is hurting soldiers whose salaries have lost value, adding that “members of the military are suffering and getting hungry like the rest of the people.”

In unprecedent criticism of the political class, which is doing little to move the country out of the crisis, the general said: “We have warned more than once about the dangers of the situation and how things might blow up.”

Aoun referred to budget cuts to the army over the past few years but also vowed the army would protect civil peace and prevent acts of sabotage against public or private property.

“They don’t care about the army or the suffering of members of the military,” he said.

Before the currency crash, an enlisted soldier earned the equivalent of about $700 a month but that has dropped to about $100 per month. Officers receive higher salaries but currently make no more than $400 a month.

Earlier on Monday, President Michel Aoun, who is from the same family but not closely related to the general, blasted the road closures calling them “organized acts of sabotage that aim to undermine stability.” His comments came during a meeting attended by heads of the country's security agencies and economic and financial officials.

The army and police “should fully perform their duties and implement the law without hesitation,” he said. His comments sparked concerns of a potential crackdown against the protesters to force them to open the roads. But by nightfall, many roads were still blocked.

Starting in the early morning hours, small groups of demonstrators blocked the southern, northern and eastern entrances to Beirut with burning tires and parked vehicles. In other parts of Lebanon, soldiers briefly opened some roads only to have protesters close them again shortly afterward.

In the southern village of Abbasiyeh, a man poured gasoline on his body and tried to set himself on fire before civil defense members and soldiers intervened and sprayed his body with water.

Tens of thousands have lost their jobs over the past year as the economic crisis, the worst in Lebanon's modern history, was made worse by the spread of the coronavirus. According to the World Bank, the crisis is expected to drag more than half of Lebanon’s population into poverty.

Sleiman Haroun, president of the association that represents hospitals in Lebanon, told The Associated Press that after a two-day weekend in which there was no oxygen distribution, some hospitals were running low and in urgent need of supplies, especially to treat COVID-19 patients.

“This is not a joke. It is a matter of life and death,” Haroun said, urging protesters to allow vehicles carrying supplies of oxygen to pass. There are several oxygen plants around Lebanon and they supply hospitals throughout the country, including some in remote areas.

Cases of coronavirus remain high in Lebanon, with 2,283 new cases registered Monday, raising the total since February last year to nearly 400,000. The virus has also killed 5,090 people, including 43 on Monday.

The rapidly deteriorating situation in Lebanon prompted Pope Francis, who has just completed the first papal visit to Iraq, to say he is contemplating visiting the country, which has the largest percentage of Christians in the Middle East.

He said Lebanese Maronite Patriarch Bechara Boutros Rai had asked him to add a Beirut leg onto his Iraq trip, but he declined.

“It seemed too little, like a crumb considering the problems that the country is suffering. I wrote him a letter and I promised I’d go to Lebanon. But Lebanon in this moment is in crisis,” he told reporters on the flight back to Rome.

In October, former Prime Minister Saad Hariri was named to form a new Cabinet but five months later, disagreements between him and President Aoun on the shape of the Cabinet have stood in the way of a new government’s formation.

The local currency hit a record law against the U.S. dollar on Saturday, nearing 11,000 pounds on the black market.