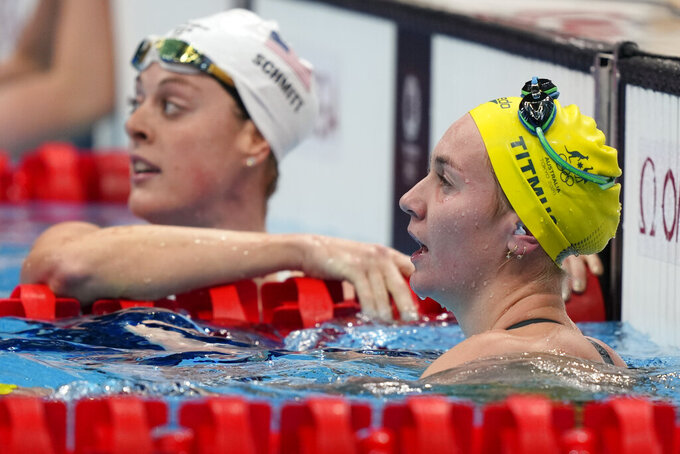 Ariarne Titmus of Australia rests after her heat in the women's 200-meter freestyle at the 2020 Summer Olympics, Monday, July 26, 2021, in Tokyo, Japan. (AP Photo/Martin Meissner)

TOKYO (AP) — Katie Ledecky finished off a busy day at the Tokyo Olympics, qualifying fastest for the first women’s 1,500-meter freestyle at the Games and in the 200 free.

Earlier, she earned a silver medal in the 400 free. In all, the American swam 2,100 meters on Monday.

Ledecky’s time of 15 minutes, 35.35 seconds was the eighth-fastest ever in the metric mile. The American already owned all 10 of the top-10 times.

“I’m swimming well, I’m in a good spot, my stroke feels good,” she said. “I knew it would come pretty easily. It's all downhill from here.”

The grueling 30-lap race has been a men’s event at the Olympics since 1904. The women are swimming it for the first time in Tokyo, although they’ve been competing in it at the world championships since 2001.

Ledecky was followed by China's Wang Jianjiahe, Erica Sullivan of the U.S. and Simona Quadarella of Italy for Wednesday's eight-woman final.

Earlier, Ledecky qualified fastest in the 200 free, an event that for the first time featured the last three Olympic champions in the field. She won in 2016, teammate Allison Schmitt won in 2012, and Italy's Federica Pellegrini earned gold in 2008.

“I’m excited that after I get through tomorrow morning, I get an evening off," Ledecky said. "That’s all I need to give myself a little reset going into the next morning.”

Ledecky led the way in 1:55.28. Schmitt and Pellegrini also advanced to the semifinals, with the 32-year-old Italian competing in her fifth and final Olympics.

“I will have to do a completely different race and attack from the outside lane," Pellegrini said. “I feel tired, and recovery will be very important.”

Canada's Penny Oleksiak was second-quickest in 1:55.38. Also moving on to the semifinals was Ariarne Titmus of Australia, who beat Ledecky to win the 400 freestyle.

Kristóf Milák of Hungary led the way in the 200 butterfly with a time of 1:53.58. The 21-year-old broke out at the 2019 world championships, taking down Michael Phelps' 10-year-old world record on his way to a gold medal.

Also advancing to the semifinals were Americans Zach Harting and Gunnar Bentz, along with Tamás Kenderesi of Hungary and Daiya Seto of Japan. Chad le Clos of South Africa, the 2012 Olympic champion, scraped into the next round in the 16th and last spot.

Kate Douglass of the U.S. had the top time in the 200 individual medley in her Olympic debut. She led 16 women into the semifinals in 2:09.16.

Katinka Hosszú of Hungary, the 2016 Olympic champion and world-record holder, was second at 2:09.70. Abbie Wood of Britain and American Alex Walsh tied for third at 2:09.94.