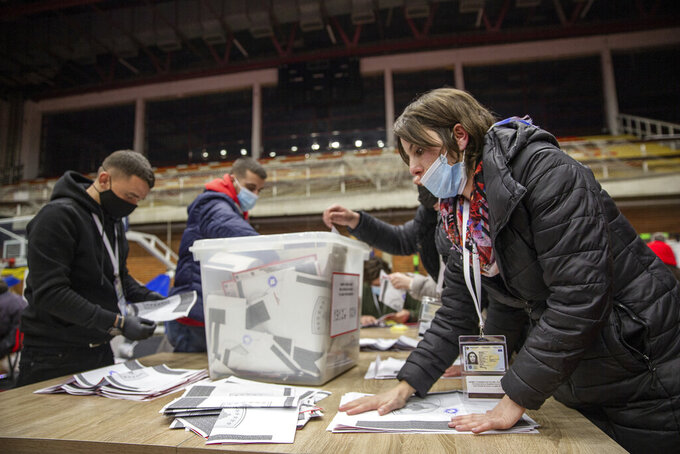 PRISTINA, Kosovo (AP) — Final results from Kosovo’s Feb. 14 early general election released on Thursday showed that a left-wing party has garnered the the most parliamentary seats, but has fallen short of an absolute majority that would have enabled it to form a government on its own.

The Central Election Commission that oversaw the poll said that the Self-Determination Movement, or Vetevendosje!, led by Albin Kurti won 58 seats in the 120-seat Parliament.

Kurti, who is expected to be the new prime minister, has said he will need seats from the country’s non-Serb minority to set up his Cabinet. Lawmakers have until May to elect a president, or the country could be forced to hold another parliamentary election.

Some key challenges Kurti is facing will be to revive the poor nation’s economy, beat back unemployment, as well as to deal with the coronavirus pandemic, organized crime and corruption.

The center-right Democratic League of Kosovo which was ousted from power won 15 seats, while the Democratic Party of Kosovo - whose main leaders are on trial for war crimes at a court in the Netherlands - won 19 seats. Both have said would not join a governing coalition with Kurti’s Vetevendosje!.

The Alliance for the Future of Kosovo party of Ramush Haradinaj, who is hoping to become the next president, won 8 seats.

Twenty seats are divided evenly between parties from the ethnic Serb minority and from non-Serb minorities.

Kosovo declared independence from Serbia in 2008, a decade after a brutal 1998-1999 war between separatist ethnic Albanian rebels and Serb forces, which ended after a 78-day NATO air campaign that drove Serb troops out and a peacekeeping force moved in.

Until May Kosovo’s new lawmakers must elect the country’s president. If no candidate is elected after three rounds of voting, the country could be forced to hold another early parliamentary election.