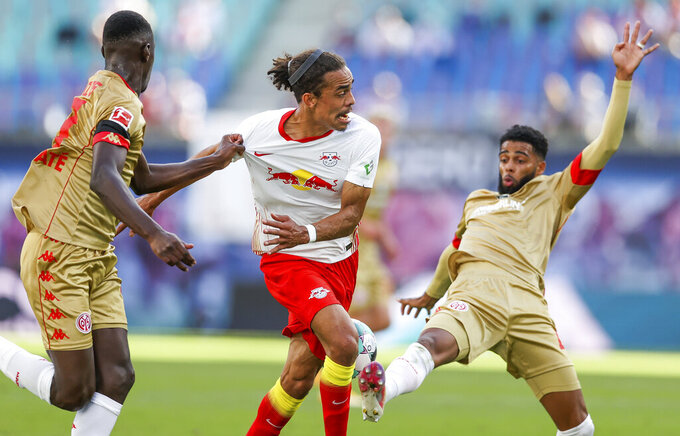 BERLIN (AP) — Leipzig eased to a 3-1 win over Mainz to start its second Bundesliga campaign under coach Julian Nagelsmann on Sunday.

Up to 8,500 fans were permitted by local authorities to attend the game in Leipzig’s stadium, with strict measures against the coronavirus intended to reduce the risk of infection.

The league’s opening weekend has seen limited numbers of fans return for the first time since restrictions began in March, all but ending for now the practice of playing in empty stadiums.

However, matches in Cologne and Munich went ahead without the planned return of fans due to a spike of new infections in both cities.

Leipzig’s fans didn’t have to wait long to celebrate. A penalty from Emil Forsberg got the scoring underway in the 17th minute and Yussuf Poulsen made it 2-0 four minutes later.

Jean-Philippe Mateta gave the visitors brief hope of a comeback with a goal in the 48th, but Amadou Haidara responded three minutes later to ensure a comfortable afternoon for the home side.