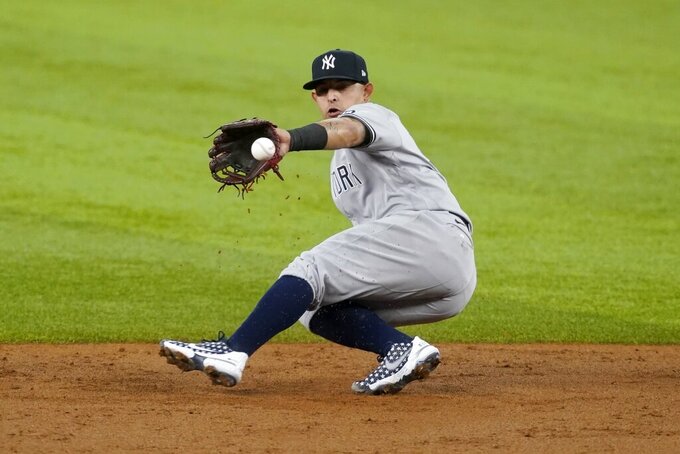 New York Yankees second baseman Rougned Odor fields a double play ball in the second inning of a baseball game in Arlington, Texas, Tuesday, May 18, 2021. The Rangers' David Dahl was forced at second on the play. (AP Photo/Tony Gutierrez) 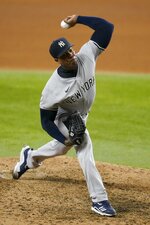 ARLINGTON, Texas (AP) — DJ LeMahieu had a season-high three RBIs, including the tiebreaking, two-run double in New York's big inning, and the Yankees beat the Texas Rangers 7-4 on Tuesday night.

LeMahieu went the opposite way for his double down the right-field line to cap a five-run fourth that put the Yankees up 5-3. That was the first multi-RBI hit this season for LeMahieu, who added a sacrifice fly to deep center in the sixth.

“Feel like the last few days, he’s getting closer to being the DJ we all know, and hopefully he’s starting to roll a little bit,” manager Aaron Boone said.

“Just a lot of really good at-bats up and down the lineup,” LeMahieu said. “Everybody had a good at-bat that inning, it was good timing, they just had put up three runs. So for us to come back and put up five like we did, I thought it says a lot about our offense .”

Rougned Odor went 2 for 5 with two strikeouts against his former team in his return to the Yankees lineup after missing 12 games because of a sprained left knee. Odor, who played his first seven big league seasons in Texas, was designated for assignment at the end of spring training and then traded to New York. Texas is paying the bulk of the $27 million that was left on the second baseman's six-year contract through next season.

Nick Solak, now the Rangers second baseman, had a solo homer after an earlier RBI single for the first Texas run.

Wandy Peralta (3-1) worked a scoreless inning. He took over for Yankees starter Jameson Taillon after Solak's eighth homer of the season with two outs in the fifth got Texas within 5-4.

Aroldis Chapman struck out the six in the ninth for his 10th save in as many chances, the best season-opening stretch in the big left-hander's 12 big league seasons. He has 34 strikeouts and has allowed only one unearned run in his 16 appearances.

“I never expect anything in this game to be automatic. That said, he's as good as it gets right now in the game at the back end,” Boone said. “He was in total control like he has been all year.”

Rangers starter Mike Foltynewicz (1-4) allowed five hits and a walk in a seven-batter stretch in the fourth, and the bases were loaded when LeMahieu greeted reliever Kolby Allard with the two-run double. Gio Urshela and Gary Sánchez both had RBI doubles in the frame before Miguel Andújar's run-scoring single tied the game 3-3.

Adolis García had a two-run single that put Texas up 3-0 in the third. The rookie center fielder has 30 RBIs in his 34 games.

“Just that fourth inning, obviously couldn’t stop the bleeding,” Texas manager Chris Woodward said. “Especially after we scored three ... that’s a big one we talk about with our pitchers, going out and getting us a zero right there is really important to winning the game.”

Odor had a single in his first at-bat in the second, then in the bottom of that frame had a nifty stop up the middle and a toss to shortstop Urshela to ignite an inning-ending double play. Odor doubled in the fifth, then in the eighth was stationed in shallow right field when he snapped former teammate Joey Gallo's hard liner for an out.

“It was good to have him back,” Boone said. “That energy and the edge he plays the game with was certainly evident for us tonight.”

Yankees: Gary Sánchez, who was catching after being the DH in the series opener, left the game in the sixth inning because of cramping in his left hamstring. ... SS Gleyber Torres could be back in the lineup as early as Wednesday after testing positive for COVID-19 last week. The fully vaccinated shortstop was cleared by MLB's joint committee to return. Asymptomatic vaccinated people can be cleared to return if they test negative twice. ... Boone said LHP Zach Britton's left elbow “checked out well” and was structurally sound when he saw a doctor. Britton felt soreness after throwing Saturday. Boone said he could start playing catch again Wednesday or Thursday. ... Boone said DH Giancarlo Stanton (left quad strain) had an “encouraging day” getting through more workouts in the gym and cage without any issues.

Corey Kluber takes the mound at the Rangers' new retractable roof stadium for the second time, this time starting for the Yankees against Texas. Kluber (3-2, 3.48 ERA) threw only one inning in his only season with the Rangers, tearing a muscle in his shoulder in his only start last July in the third game played in the $1.2 billion stadium. That scoreless inning cost the Rangers $18.5 million. Texas will likely use an opener before South Korean lefty Hyeon-Jong Yang makes his fifth MLB appearance.