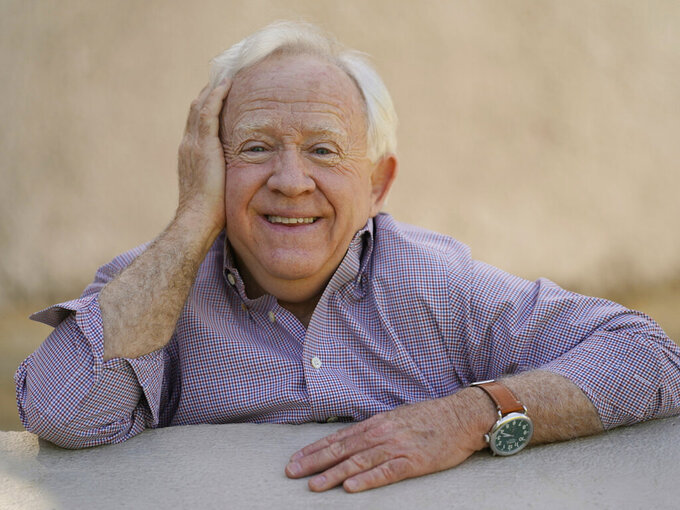 Actor Leslie Jordan poses for a portrait at Pan Pacific Park in the Fairfax district of Los Angeles on Thursday, April 8, 2021 to promote his new book "How Y'all Doing?: Misadventures and Mischief from a Life Well Lived." (AP Photo/Damian Dovarganes)

NEW YORK (AP) — Last year at this time, as much of the world was on lockdown due to the pandemic, Leslie Jordan began posting daily videos of himself on Instagram.

The actor known for roles in the “American Horror Story” franchise and “Will & Grace” was staying near family in his hometown of Chattanooga, Tennessee, and was bored.

Many of Jordan's videos included him asking “How ya'll doin?” He referred to his followers as “hunker downers.” Sometimes he posted stories about Hollywood or his childhood growing up with identical twin sisters and their “ mama,” as he calls her. Other times he did silly bits like complete an indoor obstacle course. He quickly became a bright spot during an otherwise bleak time and his followers grew.

“Someone called from California and said, ‘Oh, honey, you've gone viral.’ And I said, ’No, no, I don’t have Covid. I’m just in Tennessee," said Jordan. Celebrities including Michelle Pfeiffer, Jessica Alba and Anderson Cooper, along with brands such as Reebok and Lululemon, would post comments.

Soon he became fixated with the number of views and followers he had, because there wasn't much else going on.

“For a while there, it was like obsessive. And I thought, ’This is ridiculous. Stop, stop, stop.' You know, it almost became, ’If it doesn’t happen on Instagram, it didn’t happen.’ And I thought, ‘You’re 65, first of all. You’re not some teenage girl.'"

The spotlight led to new opportunities. Earlier this month he released a gospel album called “Company’s Comin’” featuring Dolly Parton, Chris Stapleton, Brandi Carlile, Eddie Vedder and Tanya Tucker. He also has a new book called, “How Y’all Doing?: Misadventures and Mischief from a Life Well Lived.” It's Jordan's second book. His first, “My Trip Down the Red Carpet” was published in 2008.

“That sort of dealt with all the angst and growing up gay in the Baptist Church and la, la, la, la, la. And this one, I just wanted to tell stories." In “How Y'all Doing,” Jordan writes about working with Lady Gaga on “American Horror Story," how meeting Carrie Fisher led to Debbie Reynolds calling his mother, and the Shetland pony he got as a child named Midnight.

Jordan says it was hard to narrow down what he wanted to write about because he's a storyteller by nature.

“It’s very Southern. If I was to be taught a lesson or something when I was a kid, I was told a story."

With no shortage of anecdotes, Jordan ends the book with a tease there's more to come. "This is not goodbye forever,” he writes but won't say if there is an official plan for more, just that if this book does well, he'd love to write another.

Now that the globe has hit the one year mark of the pandemic, Jordan is less reliant on Instagram. He sometimes has to remind himself to post something new and can scramble for content.

“I didn't plan it in any way at all," he said of his quarantine surge in popularity. People say to me, ‘Tell me what you did, because I want to get a lot of followers.' I have no idea. I remember the day it got to a million. Now it’s almost 6 million. .. I'll tell you where it helps, when they go to negotiate the money," he laughed.

Jordan, who was most recently in the Fox comedy “Call Me Kat” starring Mayim Bialik and “The United States vs. Billie Holiday,” says he made a decision when he turned 60 to treat showbiz like a regular job and clock out each evening. “At six o'clock, the curtain goes down. TV and movies, see, that’s my job. I have other things that I do besides that." These days, Jordan spends much of his spare time taking riding lessons and is preparing for his first horse show in June.