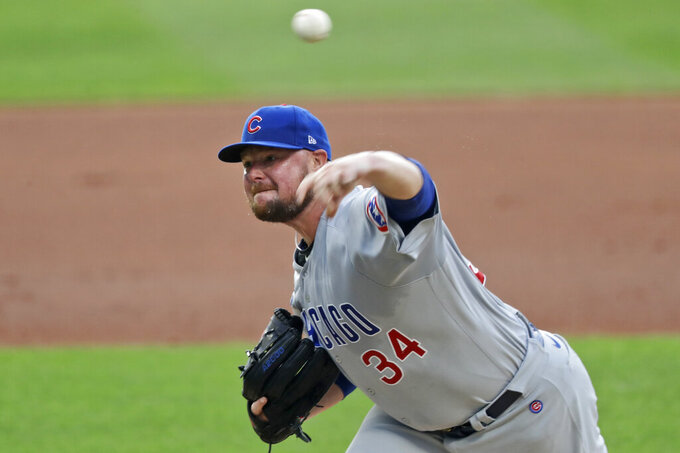 CLEVELAND (AP) — Jon Lester and the Cubs didn't let another of 2020's distractions slow them one bit.

Lester looked comfortable on a mound where he helped make history, Jason Heyward hit a three-run homer and Chicago returned from a four-day layoff and rolled to a 7-1 win over the Cleveland Indians, who welcomed back manager Terry Francona after a couple bumpy days.

Lester (2-0) allowed three hits in six innings as the Cubs, whose weekend series at St. Louis was postponed because of a COVID-19 outbreak on the Cardinals, moved to 11-3 for the first time since 2016.

Four years ago, Lester pitched three scoreless innings of relief in a drama-filled Game 7 of the World Series when the Cubs beat the Indians to win their first title since 1908. This start had been delayed by the postponements, but Lester said he was picked up by his teammates, who cheered like Little Leaguers from the dugout.

“It’s nice to see these guys show up with energy today,” Lester said. “Like I’ve said before, I think that’s what (manager David Ross) Rossie kind of brings to these guys. It’s that kind of accountability of, hey, maybe we get beat today, but we’re going to have energy. We’re going to be in every pitch, we’re going to grind. We’re going to need to do.”

Heyward, who drove in Chicago's first run in the second, connected for his second homer to put the Cubs ahead 6-0 in the sixth. Progressive Field is also filled with pleasant memories for Heyward, who famously called a team meeting late in Game 7 to regroup the Cubs after the Indians rallied.

For the first time this year the Indians gave up more than four runs, ending the second-longest run (18 games) to open a season.

Cleveland played for the first time since it was revealed that pitchers Mike Clevinger and Zach Plesac violated team rules by leaving the team's Chicago hotel over the weekend. Both are being quarantined, although the Indians don't think they were near anyone with COVID-19 when they ventured out.

Clevinger had been scheduled to face the Cubs, but his risky behavior landed him on the restricted list and in the doghouse. Adam Plutko (1-1) started for Clevinger and made it clear after the game that his teammates have some making up to do to win back trust.

“They hurt us bad,” he said. "They lied to us. They at here in front of you guys and publicly said things that they didn’t follow through on. It’s gonna be up to them. It really is. I’ll let them sit here and tell you how they’re gonna earn their trust back.

Francona returned after missing eight games to rest and treat a gastrointestinal ailment that has bothered him for nearly a year. He underwent another procedure last week at the Cleveland Clinic and said he's going to do try and finish the season.

“I can’t promise this is going to go perfect,” he said. "But I’m certainly going to give it the best shot I can.”

The Cubs pushed a run across in the second, which began with Kyle Schwarber battling for 11 pitches — to the delight of Chicago's barking bench — before Plutko struck him out. But the at-bat may have helped Contreras, who singled, moved up on a walk and scored on Heyward's single.

Chicago tacked on five more in the sixth of reliever Cam Hill on a sacrifice fly by Contreras and Happ's RBI single before Heyward went deep off Phil Maton.

Jason Kipnis knew exactly where he was going. Mostly.

Back in Cleveland for the first time as a visitor after nine seasons with the Indians, Kipnis, who signed with the Cubs as a free agent, found himself in hallways and hidden areas he'd never been.

“I’m getting to see a whole different side,” he said.

Kipnis loved his time with the Indians and said it's sometimes tough to think about what might have been in '16 — if not for the Cubs.

Kipnis was saluted with a video tribute before the game and greeted warmly by both dugouts before his first at-bat. He doubled.

“It was a good moment,” Francona said. “He deserved it. He’d been a good Cleveland Indian for a long time.”

Cleveland's Carlos Santana has drawn a walk in nine straight games and leads the league with 24. He moved past Tris Speaker (857) and into second place in team history behind Jim Thome (1,008) in walks.

Carlos Carrasco (2-1) starts for the Indians, who will have another flashback from in 2016 when they face Kyle Hendricks (2-1). He started Game 7 when the Cubs clinched.