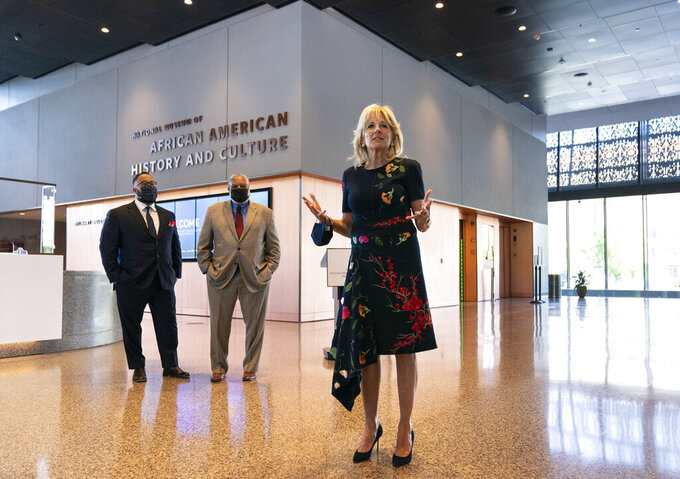 But the conversation on the House floor on Friday approached sniping as lawmakers objected to being required to keep masking up until all 435 of them get their COVID-19 shots.

Across Washington, the government is adjusting to new federal guidance easing up on when masks should be worn.

“So much for following the science,” Rep. Greg Murphy, R-N.C., a urologist, said after complaining that he'd have to put his mask back on after his House floor speech despite being fully vaccinated.

But on Capitol Hill, lawmakers have to keep wearing masks on the House floor, according to a memo from the Office of the Attending Physician, Dr. Brian Monahan.

"The present mask requirement and other guidelines remain unchanged until all Members and Floor staff are fully vaccinated," House Speaker Nancy Pelosi said in a memo to her Democratic colleagues. “Returning the Capitol to the welcoming and safe venue that it has been requires us to not only secure it physically but to make it safe from the virus.”

Recent surveys suggest that about 1 in 4 House lawmakers are not fully vaccinated.

Lawmakers can remove their masks while on the House floor to make speeches, but must mask up after they finish. They are, however, free to resume “pre-pandemic activities” elsewhere in the House complex of office buildings and public spaces.

In the Senate, Republicans Susan Collins of Maine and Joni Ernst of Iowa were among senators who didn't hesitate to remove their masks as soon as they heard the news. They were seen entering the Senate chamber Thursday marveling at being mask-free and calling out, “Freedom!”

Senate leadership has not commented on the updated mask guidance, which came down as Biden and a group of Republican senators discussed infrastructure in the Oval Office.

“So we all looked at each other ... we took all of our masks off,” Sen. Shelley Moore Capito, R-W.Va., told Fox News on Friday. "It felt very freeing, and we had a great discussion after that. We all felt good about it, and it certainly helps the flow of conversation.”

It was a much different scene Friday at the White House.

Reporters caught up with President Joe Biden as he made an unannounced appearance on the White House driveway to pose for photos with a departing staff member. Asked if he was enjoying his first workday without a mask, Biden replied “yes” as he reentered the West Wing.

For the first time in about a year, reporters went barefaced as they questioned White House press secretary Jen Psaki at the daily briefing.

After the CDC guidance went out, Psaki said, staff were immediately notified by email that they could stop wearing masks, including in meetings with Biden. Similar guidance was issued to the White House Correspondents' Association, which dropped its mask requirement for journalists on the premises.

Psaki said it may take a few days to put the new guidelines in place across government and figure out whether it means additional staff — many of whom have been working remotely — will be allowed onto the White House campus.

“We’re eager to get back to a version of normal, but we need a little bit of time to implement it and also to review additional steps,” Psaki said.

Some government departments didn't need any time figuring it out.

Mask-wearing remained in force at the Smithsonian's National Museum of African American History and Culture as it reopened Friday. Jill Biden stopped in to greet the staff and said the relaxed mask guidance feels as though “inch by inch we're moving forward" against the pandemic.

The Smithsonian said it would keep mask requirements in place for anyone over age 2 while it reviews the new guidance.

During a House Republican caucus leadership vote, most members didn’t wear masks, and several reporters removed them as well following guidance from the Capitol physician that said vaccinated people don’t have to wear them in the hallways.

Some Republicans addressed the issue from the House floor.

Rep. Louie Gohmert, R-Texas, criticized Democrats for having argued that Republicans weren't following the science. He said it's Democrats who now are guilty of that.