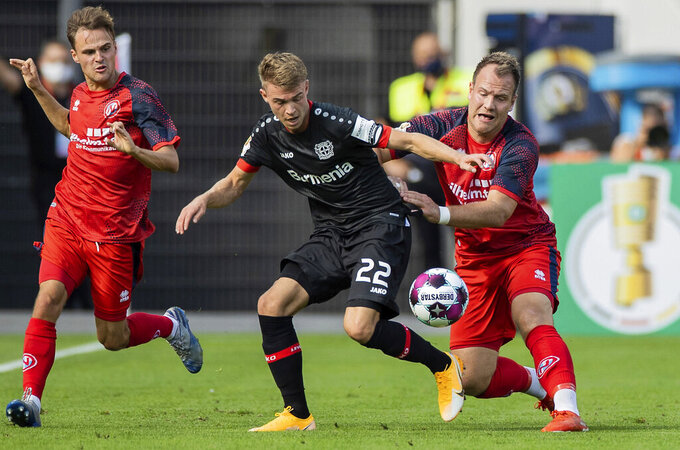 BERLIN (AP) — Bayer Leverkusen easily won its first game without Kai Havertz, routing fourth-tier Eintracht Norderstedt 7-0 in the first round of the German Cup on Sunday.

Germany star Havertz joined Chelsea in the offseason, but Peter Bosz’s team showed no ill effect as it raced into a 3-0 lead after 12 minutes and 6-0 at the break.

Patrik Schick came on for his Leverkusen debut and missed two good chances before rounding off the scoring in the 77th minute.

Norderstedt was among a host of smaller clubs that gave up their home advantage due to the costs of meeting conditions to restrict the risk of coronavirus infections. Up to 300 fans were allowed at Leverkusen.

Some 7,500 supporters cheered third-division Hansa Rostock against Stuttgart, but couldn’t prevent their side losing 1-0. It was the biggest crowd at a German soccer game since the pandemic restrictions began in March.

Hamburg-based St. Pauli was knocked out by fourth-tier SV Elversberg 4-2, Kiel enjoyed a 7-1 rout against fifth-tier Rielasingen-Arlen – which also gave up its right to play at home – and Paderborn progressed with a 5-0 win over Wiedenbrück.

Hoffenheim needed penalties to get past fourth-division Chemnitzer FC, and second-division Jahn Regensburg successfully emerged from another penalty shootout against third-division Kaiserslautern.