Leverkusen tastes success in Germany by adapting to pandemic 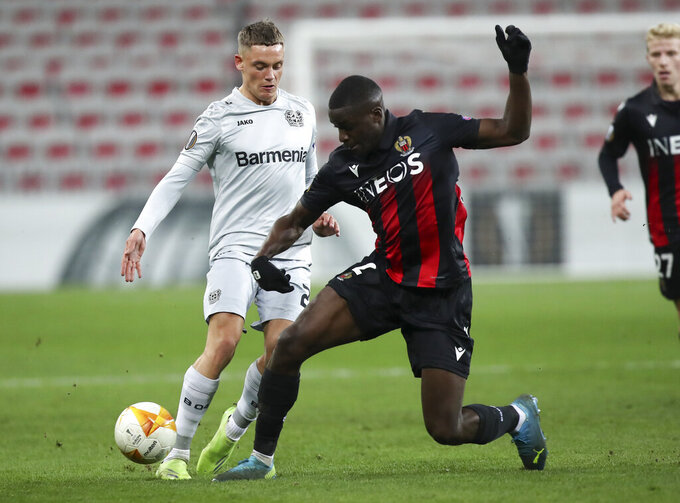 After selling its standout player, Kai Havertz, few expected Bayer Leverkusen would emerge as a Bundesliga title challenger this season.

Instead, Leverkusen has quietly put together a 10-game unbeaten run to start the league season and sits second, one point behind reigning German and European champion Bayern Munich. Adapting to the effects of the coronavirus pandemic has been a key part of the recipe.

In a packed schedule, Leverkusen has transformed its training sessions and doesn't risk players who aren't fully fit. The team has also changed its tactics. A greater focus on ball possession, the thinking goes, reduces injury risk but also makes it easier for players to adapt to less-familiar roles as backups for injured teammates.

“We try to rotate a lot. We try to adapt our style a little bit. So we play intense but more controlled, more ball possession, more controlling the game,” sporting director Simon Rolfes said Thursday.

“I think it’s a combination of rotation and controlling a bit more the game that helps to to prevent injuries ... The intensity of the training sessions are very low. It’s all regeneration.”

Actually ending Bayern Munich’s reign in Germany will still be a tall order for “Neverkusen," the club's unwanted nickname following a series of near-misses in the Bundesliga and Champions League in the late 1990s and early 2000s.

Leverkusen is keeping most of Havertz’s record transfer fee aside to help it weather the financial storm caused by the pandemic. Havertz was sold to Chelsea for a reported maximum fee of 70 million pounds ($92 million) and forward Kevin Volland moved to Monaco, but the club only spent a fraction of those earnings on signing striker Patrik Schick from Roma and right-back Santiago Arias on loan from Atletico Madrid.

“What we could not do is to spend all the money we receive for Kai on new players,” CEO Fernando Carro said. “We have to take into account the income was lower and therefore we have as well a very, very strict cost control.”

Germany already has a poster child for ambitious overspending in Schalke, which is facing relegation and financial turmoil after years of heavy spending in the hope of Champions League success.

No fans are allowed in German stadiums because of the pandemic after a brief trial in September and October was ended by rising case numbers. Carro said Leverkusen budgeted for no earnings at all from ticket sales in 2020-21 and predicted no more than 50% of typical matchday earnings in 2021-22. The 30,000-seat BayArena is unlikely to be full before spring 2022, he said.

Leverkusen hasn't been spared by the pandemic schedule — it played the 2019-20 Europa League tournament in August and had six midweek games in this year's Europa League group stage — but it's had a relatively kind start to the Bundesliga. Peter Bosz's team has beaten all of the German league's bottom three but has yet to play Bayern or Borussia Dortmund.

Averaging two games a week is still tough, and the team has adapted well. Seventeen-year-old Florian Wirtz in particular has helped fill the hole left when Havertz joined Chelsea, playing nine out of Leverkusen's 10 Bundesliga games and setting up four goals.

Injuries have happened, but Rolfes said these were typically “accidents” rather than the muscle injuries which indicate a player has been overworked.

Striker Lucas Alario is out with a knee problem after scoring seven goals in as many Bundesliga games, putting more responsibility onto Schick. Midfielder Exequiel Palacios fractured bones in his back when he was struck by an opponent's knee while playing for Argentina.

Despite the club's best efforts to cope, a spate of injuries and illness meant at one stage that Leverkusen last month had a bench consisting of two goalkeepers, three defenders and a youth-team winger for a 0-0 draw with Hertha Berlin. Some clubs would be tempted to rush players back into action, but not Leverkusen.

“It’s very dangerous if you have a lot of injuries and you say, ‘O.K., I need players.' So then you take the players with 90% and say, ‘You can play,’ but then you get the next injury,” Rolfes said. “We say, ‘O.K., then we play this game with with only 15 players and the other players have some time to recover.’"