Lewis running to lead the ski federation that fired her 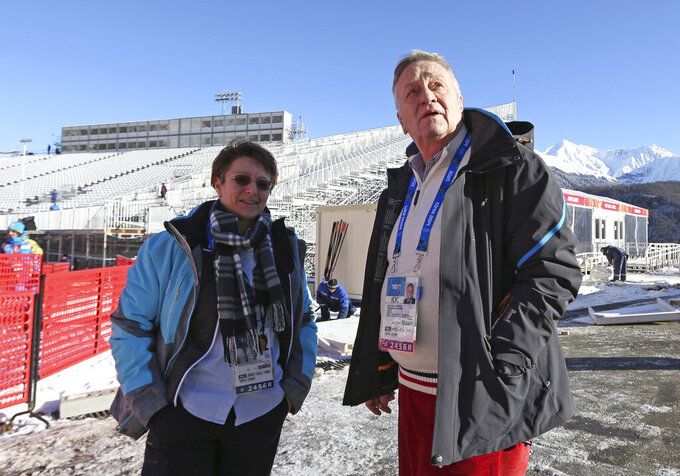 FILE - In this file photo dated Monday, Feb. 3, 2014, Sarah Lewis, Secretary General and Gian Franco Kasper, President of the FIS, the International Ski Federation, right, visit the finish area of the Aline ski course ahead of the 2014 Winter Olympics, in Krasnaya Polyana, Russia. Lewis has declared herself a candidate on Tuesday April 6, 2021, to become the first woman president of the International Ski Federation.(AP Photo/Alessandro Trovati, FILE)

GENEVA (AP) — Sarah Lewis is out to make a surprising comeback in sports politics, declaring herself a candidate to become the first female president of the International Ski Federation only six months after being fired from her role as secretary general.

Lewis, who announced her candidacy on Tuesday, spent 20 years as the top administrator at FIS before being ousted several months into the coronavirus pandemic.

It was an abrupt exit even in the often ruthless world of running Olympic sports bodies, and for one of its most prominent female officials who was untouched by scandal.

The FIS statement of only one sentence last October explained the decision was “based on a complete loss of confidence” in Lewis — though that phrase was soon deleted from its website.

Among the first messages sent to Lewis after her firing asked simply: “Who did you kill? Did you rob a bank?” she told The Associated Press ahead of launching her election campaign.

For added intrigue, one election opponent in the online vote set for June 4, Mats Arjes of Sweden, was a member of the FIS Council that removed her.

Arjes is a FIS vice president and is seen as the preferred choice of president Gian Franco Kasper, who is leaving one year early after 23 years in office. Swiss ski federation president Urs Lehmann, a former downhill world champion, is also a candidate.

Lewis’ ambition to succeed her long-time boss was known in recent years to FIS observers. But Kasper was thought unlikely to endorse the former skier who competed at the 1988 Calgary Olympics.

Still, her ousting as secretary general was a surprise. It came amid the pandemic, which twice delayed FIS elections, heaped work on staff in Switzerland, and threatened the winter sports season.

“I can’t explain it at all. I was so focused on the COVID season,” Lewis told the AP in a telephone interview. “I was probably blind-sided that there were politics going on behind the scenes.”

So why run for president of an organization whose top committee rejected her?

“I had so many people contact me and so many messages of support,” Lewis said, “all this faith and belief that I am the right person for it.”

Her work ethic and attention to detail is shown by writing letters in the past week in 25 different languages to target voters.

The past six months also gave her time for soul-searching and to reflect on her working style, which she acknowledges was intense and could be “overpowering.”

“I’m not without fault. You realize that is not the best way,” said Lewis, who has since paid her way through a business leadership course. “It was important to learn about myself and my weaknesses so that people feel I have made this transition.”

The British ski federation opted not to support Lewis as candidate and before the pandemic nominated the billionaire leader of ski brand Head, Johan Eliasch. Though Eliasch is Swedish, he is based in London and has been a business associate of Prince Andrew.

Lewis is positioning as a global candidate, counting on strong relationships with past and future Winter Olympic host nations Russia, South Korea and China.

She turned to a smaller ski nation, Belgium, for a formal election nomination. The move was supported by the country’s Olympic leader, IOC member Pierre-Olivier Beckers-Vieujant.

However, FIS has had only male presidents in its 97-year history, and Kasper is just the fourth. The council which fired Lewis currently comprises 18 men and one woman.

“It’s very easy to fix,” said Lewis, adding many capable women cannot rise within FIS because their nation already has a man in a senior position.

This does not mean a Lewis presidency would act against those that removed her.

“I don’t have any issue whatsoever with anyone who was involved in that decision,” she insisted. “There are no grudges.”