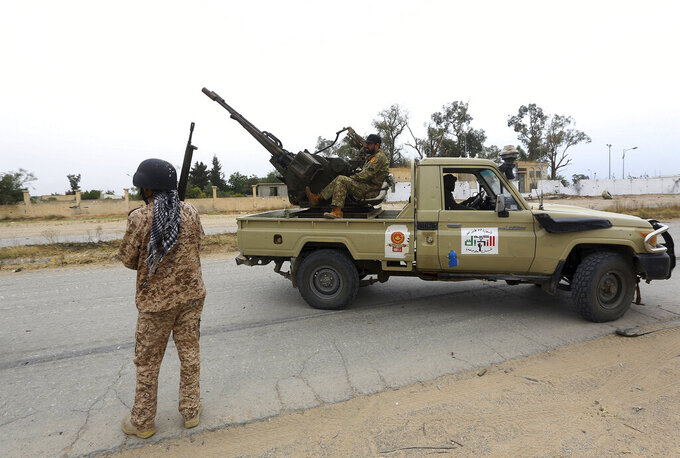 FILE - In this May 21, 2019 file photo, Tripoli government forces clash with forces led by Field Marshal Khalifa Hifter, south of the capital Tripoli, Libya. Two Libyan militia commanders and a Syrian war monitor group say Turkey is deploying Syrian extremists to fight in Libya's civil war. These extremists are affiliated with groups like al-Qaida and the Islamic State. They're fighting as mercenaries on behalf of the United Nations-supported government in Libya. The Libyan sources told The Associated Press that Turkey has airlifted more than 2,500 foreign fighters into Tripoli, and that “dozens” are extremist-affiliated. (AP Photo/Hazem Ahmed, File)

It was the latest attack on Tripoli by the eastern forces’ commander Khalifa Hifter, who launched a push last year to capture the city. The fighting, which has killed hundreds of civilians and displaced tens of thousands, has mostly stalemated in recent months.

Libya has been in turmoil since 2011, when a civil war toppled long-time dictator Moammar Gadhafi, who was later killed. The country has since 2015 been split between rival administrations in the east and the west, each backed by armed groups supported by an array of foreign powers.

Hifter’s offensive is supported by France and Russia, as well as Egypt, the United Arab Emirates and other key Arab countries. The government in Tripoli is backed by Turkey, which deployed troops and mercenaries to help defend the capital in January, as well as by Italy and Qatar. Mercenaries, mainly from the Syria battlefield, are now fighting on both sides and complicating the already complex proxy war.

Meanwhile, a report by U.N. experts monitoring sanctions against Libya obtained earlier this week said that a private Russian security company has provided between 800 and 1,200 mercenaries to support Hifter's offensive on the capital.

Hifter's artillery on Wednesday hit two Tripoli neighborhoods, Tajoura and Abu Salim, according to Amin al-Hashemi, the Health Ministry's spokesman with the Tripoli-based government. Children and paramedics were among the 46 civilians wounded in the shelling, al-Hashemi added.

“This the first time since the beginning of 2020 that residential neighborhoods are that intensively targeted,” he said.

“These attacks are unacceptable and denote contempt for international law and human life,” the ministry said in a statement.

At the United Nations, U.N. spokesman Stephane Dujarric said the world body continues “to remind the parties of their obligations under international humanitarian law to take all feasible measures to avoid civilian harm.”

Earlier this week, the International Criminal Court’s prosecutor Fatou Bensouda said her office is working on new arrest warrants for possible war crimes committed in Libya. Attacks on civilians may constitute crimes under the Rome Statute that established the ICC, she said, adding that military commanders will be held accountable for crimes committed by their forces.

The fighting over Tripoli has intensified in recent weeks despite U.N. calls for a cease-fire to allow authorities to focus on curbing the spread of the coronavirus. Libya has so far recorded 64 virus cases, including three deaths. The pandemic could possibly devastate war-torn Libya, where a decade-long conflict has ravaged key infrastructure and created dire medical shortages.

Dujarric said that already this year, 13 attacks have impacted field hospitals, health care workers and ambulances, including attacks on hospitals identified to treat COVID-19 in Libya. He added that “the U.N. fears that figures may be underreported as there is a lack of testing capacity and contact tracing.”