Life on the line: Early voters wait 'as long as it takes' 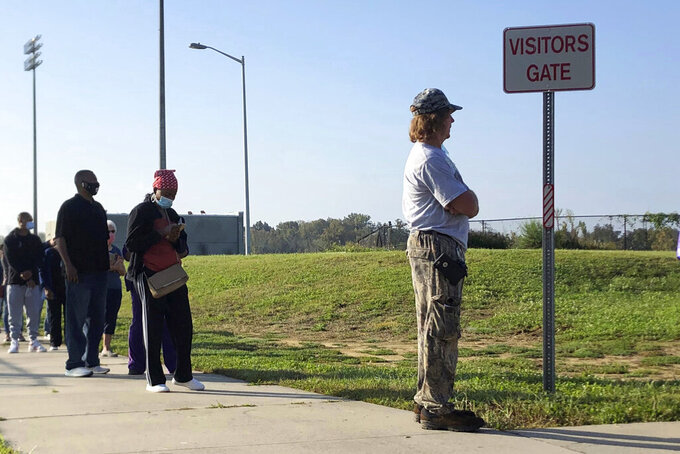 In this Thursday, Oct. 15, 2020, photo voters line up at Mallard Creek High School during the first day of in-person voting ahead of the Nov. 3 elections in Charlotte, N.C. (AP Photo/Laurie Kellman)

CHARLOTTE, N.C. (AP) — Americans are accustomed to standing in line. They queue up for airport security, the latest iPhone, COVID tests, concerts or food. But the line of voters building before sunrise outside Mallard Creek High School in a distant suburb of Charlotte, North Carolina, on Thursday was different.

It was a living chain of hundreds of people who stepped into place — around the building, down some stairs and past a fleet of idled yellow school buses — determined to be counted in the elemental civic ritual of voting, which seems even more consequential in the bitterly fought 2020 presidential election.

“If you want the United States to remain united, you need to vote,” said Monique Sutton, 52 and a nurse practitioner. “Because if we get any further away from each other, I don’t know that we’ll ever be able to come back.”

The rush to vote early is a phenomenon that has shattered early turnout records across critical Mecklenburg County, battleground North Carolina and the nation, driven both by Democratic enthusiasm and a pandemic that has claimed more than 217,000 American lives.

Biden's formula for winning the state relies on robust turnout by Black voters and suburban women. Trump will need to again deliver enormous margins among whites in rural areas.

The pandemic is the dismal overlay of the campaign, but it has inspired record levels of early voting.

By the end of Thursday, North Carolina had accepted 333,466 in-person ballots, up from 166,000 on the first day of in-person voting in 2016. In Mecklenburg County, the number was 35,015, compared with about 14,000 on opening day four years earlier, according to the State Board of Elections.

Shaken by coronavirus and thinking about what comes before and after this year of isolation and blame, every one of more than a dozen line dwellers interviewed during the first six hours of in-person voting said they chose to show up because they worried that mailed-in ballots could get lost.

One after another, they spoke of a sense of urgency driving them to the polls on the first day, even though they can vote early and in-person through Halloween.

“It's just on everyone's radar,” said Audrey Long, who was struck by news coverage of lines in other states, such as Georgia. “This is something that's within our control.”

Their top two issues: the administration's handling of the coronavirus pandemic and Trump's refusal to acknowledge systemic racism or condemn white supremacists.

Masked and inching forward with 6 feet between them, the people in the line voiced a distinct disregard for how long they'd have to wait for the simple act of casting a ballot.

“What I tell my kids is, there’s people that look like us that have died for this right,” said Manny Golfe, 44, a commercial banker who waited almost two hours to vote for Democrat Joe Biden. Like most people in the line, he is Black. “So yeah, it’s that important for me to get out here and wait in line for however long it takes. And if it took all day, I’d stand out there.”

As the sun rose over the deserted sports complex — home of the Mavericks — voters filtered through the nearby Highland Creek community to line up in their cars out front, or take their place in the crowd.

By the time the door had been open for an hour, more than 140 people were willing to risk joining the queue, which stretched between the football stadium and tennis courts toward a remote back parking lot.

The line, some said, provided the unexpected social delight of chitchat with strangers after six months of isolation. But mostly, the atmosphere was one of quiet patience, and a fair bit of reflection.

Retired nurse Cheryl Midkiff, 72, an independent, would not say whether she was voting for Trump or Biden.

But she said the act of casting a ballot on the first day was a civil way of making her statement on issues that have strained relationships, even decades-long friendships, throughout the Trump presidency. That includes one woman she's known since the two were teens.

“I've had to do a lot of soul searching about it,” Midkiff said. “If it were a more casual relationship, that person probably would not be in my circle. And I don't like that about myself.”

Some in line said they were thinking about both the past and the future.

Karen Stirling, 74, a retired accounts payable supervisor for nearby NASCAR, said she regrets not voting in 2016. She didn't like Trump or Democratic presidential nominee Hillary Clinton, and she "thought no one would miss” her vote. Trump won, and the pandemic frightened her.

This time, Stirling said, she set her alarm early Thursday, ate some Cheerios and got in line at 7 a.m. Nearly two hours later, Stirling headed home with her voting “pen” in hand. Inside, she said, each person got one enveloped in sterile plastic to cast a “touchless” ballot in line with pandemic safety.

“I just wanted to make sure that my vote was counted this time,” she said, before casting a vote for Biden.

For many, voting on the first day carried the additional weight, especially given North Carolina's ugly history of gerrymandering and voter suppression.

“It's my civic duty,” said Cynthia Teace, 60, who said she's voted in every election since she was 18. “My grandmother (and) grandfather were from Eastern North Carolina. From childhood on, they would always tell us how important it was to vote. Equal rights for voting first started in North Carolina so it's something that I instill in my children as well.”

Around lunchtime, Arve Carter, 49, and her daughter, Autumn, 23, voted together — in part because Arve's mother insisted on it.

“It's more of a privilege right now,” said Autumn. “I know that my grandmother and great-grandmother really fought for this to be an opportunity for us to be able to do this.”

By then, the line had dwindled to about a dozen people.

About 100 miles southwest, Trump, the world's most famous recently-recovered COVID patient, appeared at a campaign rally in Greenville, North Carolina. Reports of lines of voters dominated the news in North Carolina, after days of similar reports from Georgia and elsewhere.

Trump noticed it was the first day of in-person voting in this critical state. From the stage at Pitt-Greenville Airport, he said he'd heard about “lines through the roof in areas that would more typically vote for us.”

“I think we’re leading everywhere where people are intelligent actually,” he said.