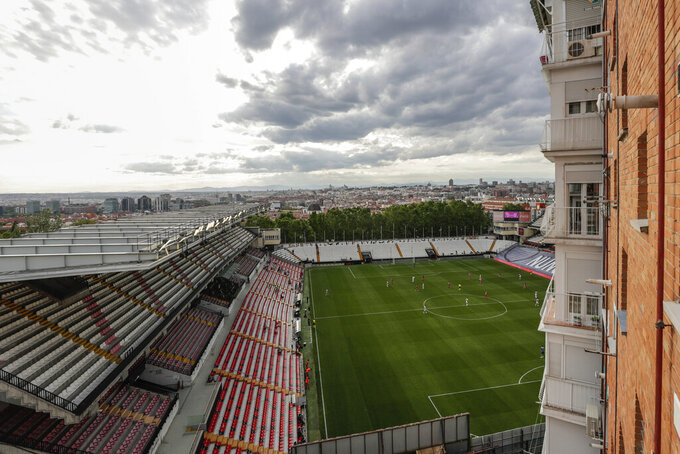 Rayo Vallecano and Albacete soccer players play a second-division game in Madrid, Spain, Wednesday, June 10, 2020. With virtual crowds, daily matches and lots of testing for the coronavirus, soccer is coming back to Spain. The Spanish league resumes this week more than three months after it was suspended because of the pandemic, becoming the second top league to restart in Europe. The Bundesliga was first. The Premier League and the Italian league should be next in the coming weeks. (AP Photo/Manu Fernandez)

BARCELONA, Spain (AP) — Spanish clubs are going to consider more direct swaps of players instead of big transfer payments given the economic impact of the coronavirus crisis, the league president says.

Javier Tebas said on Thursday he expects Europe’s major soccer leagues to align their transfer windows to start in July and finish in mid-October before the likely delayed start of next season’s Champions League.

“The transfer market will be subdued. It is clear that there will be fewer direct cash transactions. There will be more player swaps,” Tebas told media in video conference.

Tebas said he did not expect the Spanish league's transfer market to move more than 800 million euros ($908 million), compared to 3 billion euros ($3.4 billion) last summer. He ruled out blockbuster moves such as the world record 222 million euros ($262 million) Paris Saint-Germain spent to pry Neymar from Barcelona in 2017.

“There will be a few big moves, but nothing like we have seen before,” he said, pointing to the huge hole clubs will have in their budgets for not playing with fans and the overall economic blow from the public health emergency.

La Liga is resuming on Thursday after three months when Sevilla and Real Betis meet in a hotly contested derby. Players will continue to undergo regular tests and maintain strict safety and hygiene measures. Games will be played without fans.

Tebas said that even salvaging the season by playing the remaining 11 rounds at an accelerated rate, Spanish clubs are going to lose 700 million to 800 million euros if there are no fans in the stadiums this year.

He said he was hopeful that around “10 to 15% of fans could be back in the stands” this summer, but Spain's government has ruled that out.

Tebas said the loss of revenues from tickets, stadium food and on-site merchandising, combined with the risk that television clients could still demand money back if the matches don’t entertain the same public, will force clubs to maintain efforts to reduce player salaries.

In any case, he said he did not fear for a talent flight from Spain to other leagues in search of better pay.

“I don’t see it because the crisis caused by COVID-19 is worldwide,” Tebas said. “All the big clubs in Europe have to handle their own problems.”

As for next season, Tebas said he wants to start the 2020-21 campaign on Sept. 12, roughly three weeks later than its usual start. The current season is scheduled to run until July 19.