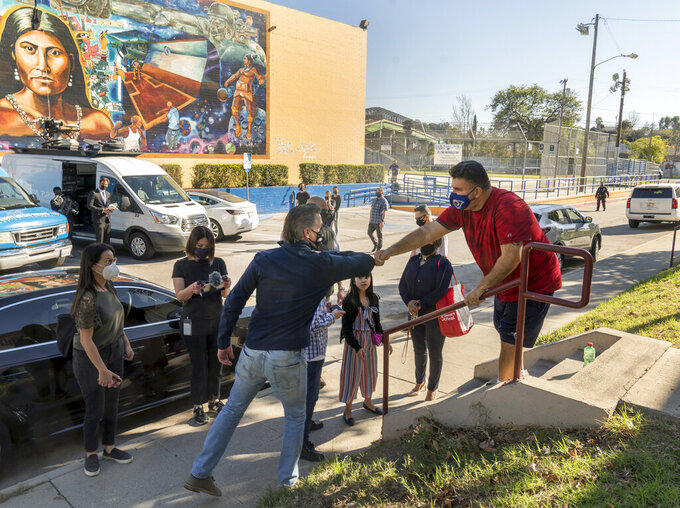 SACRAMENTO, Calif. (AP) — California's Latinos, who have borne the brunt of coronavirus deaths and the pandemic's economic toll in the state, are a critical voting bloc for Gov. Gavin Newsom as he fights for his political life in a likely recall election driven by criticism of his handling of the health crisis.

Latinos are the largest racial or ethnic group in California and their share of the population is increasing faster than others. Their voter turnout is also rising, but it's still disproportionately low, leaving politicians room to grow support.

With a special election on whether to keep or replace Newsom now a near certainty for the fall, Latino advocates say their communities will be looking for engagement and a more robust policy response to address the effects of the pandemic.

“If Newsom fails to re-engage that group and give them reasons to vote for him he will lose,” said Jacqueline Martinez Garcel, chief executive officer of the Latino Community Foundation. “People are exhausted, they want answers, to be seen, be heard and be addressed.”

Newsom, a first-term Democrat, launched his anti-recall campaign last week. He is painting the effort as a partisan attack by pro-Trump Republicans on the state's progressive values, including what Newsom called the “browning of California."

The initiative's lead proponent, Orrin Heatlie, once posted online that immigrants should be microchipped, something Newsom references often. Heatlie says it was hyperbole but acknowledges he was inspired to pursue a recall after hearing Newsom speak on immigration.

“The real impetus of the recall goes back to my advocacy on behalf of our diverse communities," Newsom said Thursday in Santa Ana.

He chose the predominantly Latino Southern California city — the second-most populous in the political battleground of Orange County — to make a significant announcements on vaccinations: In three weeks all Californians 16 and older can begin getting shots. He also emphasized his commitment to ensuring equal vaccine access for Latinos.

Luis Alvarado, a Republican strategist, said if a GOP candidate can separate themselves from the Trump brand there is an opportunity to make the case to Latino voters, particularly small business owners, that Newsom's actions have harmed them.

“If they're successful in doing that then certainly the Latino vote could be persuaded to vote for the recall," Alvarado said.

One of the leading Republican candidates for governor is Kevin Faulconer, a former mayor of San Diego, which is about one-third Latino. He doesn't speak Spanish — nor does Newsom — but chose the local affiliate for the Spanish language network Univision for his first talk about his candidacy.

The issues on which Faulconer is targeting Newsom — school closures, the shuttering of businesses and job losses — matter to Latino voters, campaign manager Stephen Puetz said.

“Latino voters are incredibly important to our campaign, to Kevin personally, and to our pathway to victory,” he said.

Newsom’s campaign manager is Juan Rodriguez, the son of immigrants from El Salvador and a longtime fixture in California politics. He said the campaign is partnering with community-based organizations that understand the diversity within California’s Latino communities and deploying surrogates to speak around the state.

“We want more focus, we want more attention, we want more intentionality when it comes to our community,” Gonzalez said. “But are we ready to abandon Gavin Newsom? No.”

Democrats have a more than 3-to-1 advantage over the GOP in voter registrations among California Latinos, who made up about a quarter of the electorate in the 2020 presidential election but tend to turn out in lower numbers in off-presidential elections. Public polling prior to Newsom's 2018 election showed Latinos strongly favoring him over Republican John Cox, who is running again, contributing to Newsom's blowout victory.

But a recall isn't one candidate versus another. Voters will first be asked whether Newsom should be recalled then to choose from a separate list of candidates to replace him. The votes on the second question will only be counted if more than half of voters say Newsom should be removed.

Unlike 2018, all voters will be mailed a ballot. Latinos are less likely than other groups to vote by mail, said Dr. Mindy Romero, director of the Center for Inclusive Democracy at the University of Southern California.

For both sides, the key will be to connect their outreach to Latino voters’ individual experiences, she said.

“The recall effort wants to say, ‘you are experiencing all of this challenge because of the bad decisions of this governor,’” Romero said. Newsom, meanwhile, wants to show “that he’s on the right track and he’s got everyone’s back, including the Latino community.”

Latino advocates say Newsom can't take their vote for granted and they are pressuring him to pursue policies that benefit their communities. The governor thrilled many Latinos when he appointed Alex Padilla to the U.S. Senate to replace Vice President Kamala Harris.

More than 70 Latino leaders sent Newsom's administration a letter in February calling for a more urgent focus on vaccinating their communities, who make up 39% of California's population but account for nearly half the pandemic deaths.

“Latinos have been largely neglected from the state’s COVID-19 vaccine rollout and response efforts,” the letter said.

Latinos also make up nearly half of California's frontline workers and suffered more than half of all pandemic job losses through last September, according to December reports by the nonpartisan Legislative Analysts Office. Latinos account for the majority of farmworkers, construction workers, cooks and numerous other frontline jobs.

In early March, Newsom announced an overhaul to the vaccination system, promising 40% of doses for the least-advantaged ZIP codes. Race and ethnicity isn't a factor in determining where those doses go but the effort overlays heavily with Latino communities in Southern and Central California.

The point of the February letter was to “provide a Latino lens” that could inform better public policy, said Sonja Diaz, founding director of the Latino Policy & Politics Initiative at the University of California, Los Angeles.

Christian Arana, vice president of policy for the Latino Community Foundation, said Newsom should expand the state's government-run health care program to immigrants 65 and older living in the country illegally.

“There is no better way to energize a group of people who have supported you in the past to come out and defend you (than) if you get this policy done," Arana said.

Newsom said he is “deeply sensitive" to the pandemic's impact on Latinos, pointing to his actions like creating a housing program for farmworkers to isolate if they are sick and the recent change in vaccine allocation.

“It’s very important to me, but I don’t look at it, with all due respect, through an electoral lens. It’s a very human thing,” he said in a recent interview with The Associated Press.