Lima ready for Mousasi in Bellator fight for 185-pound title 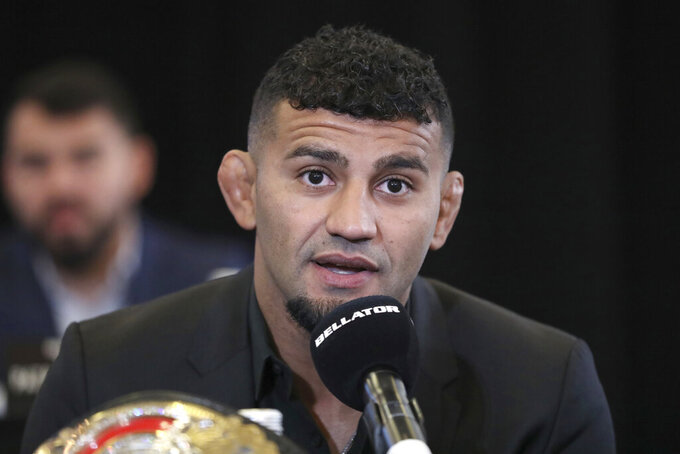 FILE - In this Monday, March 9, 2020, file photo, Douglas Lima speaks at a news conference promoting the Bellator Spring & Summer fight cards in New York City. Twenty years after Lima moved to the United States, he tries to put a bow on his fruitful MMA career when he fights for Bellator’s vacant 185-pound championship on Thursday, Oct. 29 at Mohegan Sun in Uncasville, Connecticut. His anticipated fight with Gegard Mousasi was scheduled for May 9 in California. (AP Photo/Gregory Payan, File)

Born in Brazil, Douglas Lima tells the story of how his father uprooted the family for an expected brief stint in America and a job that would pave the way toward a better life back home.

“It was supposed to be just for a year,” Lima said. “He just wanted to work a lot, save some money and go back home.”

The Limas never returned to live in Brazil.

They forged a new life in Georgia, where Lima’s love of martial arts and Bruce Lee movies blossomed to the point where he decided to become a fighter himself. He started training at 13, competed in a competitive bout at 17 and thought, “this is it, I’m never stopping this again.”

Twenty years after Lima moved to the United States, he tries to put a bow on his fruitful MMA career when he fights for Bellator’s vacant 185-pound championship. He already holds the promotion’s welterweight title and would become a two-division champion with a win Thursday over Gegard Mousasi (46-7-2) in the main event of Bellator 250.

The fight will be held at the Mohegan Sun in Uncasville, Connecticut, a resort casino on tribal land that also plans to host more than 30 college basketball teams as it becomes a modified bubble for several early season tournaments.

The 32-year-old Lima (32-7) had his professional career inside the cage and out thrown into uncertainty in the wake of the coronavirus pandemic. His anticipated fight with Mousasi was scheduled for May 9 in California. The postponement means it will be 369 days since Lima last fought, a unanimous decision win over Rory MacDonald that earned him the 170-pound world championship and a $1 million prize.

Certainly not ideal, but Lima stayed in shape in part by working out at the gym — the one he opened in Lawrenceville, Georgia, as a pandemic wreaked havoc on his business plan.

His American Top Team–Team Lima gym was scheduled to open in April until it was pushed back in the wake of health restrictions implemented because of the pandemic. The gym was not open to the public, but Lima and a handful of MMA fighters were able to stay sharp by using the facilities. The gym is open and Lima is not just the owner, but he’s also an instructor. He’s usually at the gym working out or even teaching Brazilian jiu-jitsu.

Lima said business is good, even as the early days were “scary” as he fretted over the financial impact of owning a closed gym.

“Most of them are (scared), they’re still a little freaked-out about coming back to the gym,” he said. “I can’t complain, man. It’s going really good.”

Lima, who says he wants to fight another four or five years, is in the gym game for the long haul.

“I just wanted something for myself,” he said. “I just love helping people achieve their goals. I want people to be healthy, I want people to fight. It’s something I always wanted to do. Retirement, too. It’s a business for me and my family, too.”

The bout on CBS Sports Network with Mousasi, a former Bellator middleweight champ and UFC fighter, was worth the wait — and weight. Lima had to bulk up to make weight for the fight and said he had trouble gaining the final five pounds, though it paled to the dangerous weight cuts most fighters experience. It was the first time in 10 years Lima didn’t have to significantly cut (he walks around at 200 pounds) to make weight.

He made the jump in class because he defeated most of the top contenders, though he said he was open down the line to giving Michael Page a rematch of their May 2019 fight and wanted new options.

“It was get a few rematches or move up and fight for a different belt,” he said. “For me, it was a no-brainer. I always thought about moving up to middleweight.”

Other potential fights failed to pan out, but when Mousasi was lined up, Lima was pumped because “he’s such a bigger name, such a bigger fight.”

Lima wants to stay at middleweight and defend his championship in both weight classes, where he would join Patricio Freire, Ryan Bader and Joe Warren as the only two-division champs in Bellator history.