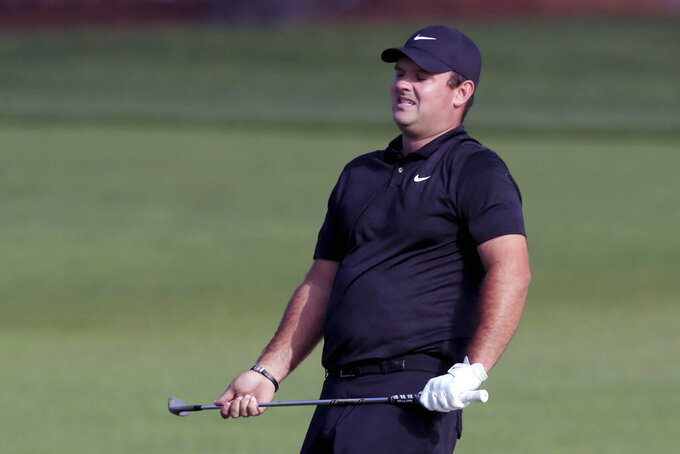 Patrick Reed reacts to his shot on the second hole during the final round of the Masters golf tournament Sunday, Nov. 15, 2020, in Augusta, Ga. (Curtis Compton/Atlanta Journal-Constitution via AP)

The PGA Tour plans to start the new year with spectators. There just won't be very many. And the views, while as gorgeous at Kapalua as anywhere, will be limited.

That doesn't set the tone for the rest of the West Coast swing, where three tournaments already have announced there will not be spectators, two of them pro-am events.

The AT&T Pebble Beach Pro-Am was the most recent to announce a spectator-free event for Feb. 11-14, though it will carry on with its pro-am of corporate titans, entertainers and athletes.

“Unfortunately our ’21 event will be unlike any of the previous editions of the tournament since Monterey County remains in a tier that will not permit live audiences at professional events in California,” said Steve John, CEO of the Monterey Peninsula Foundation.

That follows decisions by The American Express in the California desert, the Farmers Insurance Open at Torrey Pines and the Sony Open in Honolulu.

As for the Sentry Tournament of Champions, a limited number of tickets will be available. The Houston Open had a limit of 2,000 a day in November, making it the first domestic PGA Tour event with spectators. Kapalua isn't releasing the number of ticket sales, though organizers don't expect more than about 200 or 300 people.

Both tickets do not allow access to the rest of the Plantation Course.

The Phoenix Open, the rowdiest of all PGA Tour events, is still trying to piece together a plan for fans, except that it won't be near the 600,000 or more fans it typically attracts during the week.

Scott Jenkins, the tournament chairman for 2021, told Golf Digest the plan is to build a single-story structure for fans on the par-3 16th hole, down from what amounted to stadium seating. He described the situation as “fluid.”

“I’ve stopped trying to predict the future in our COVID world,” Jenkins told Digest. "We’d love to have fans. We’re the ‘People's Open.' We also understand that the safety of our fans, players and volunteers is the most important thing.”

The PGA Tour has donated $500,000 to five historically Black colleges and universities, as part of its intent to be part of the solution in improving the racial culture in society.

The other was at Prairie View A&M, and the $100,000 for the men’s and women’s golf team is in the name of Mack “Pops” Champ. That’s the late grandfather of Cameron Champ, who last month donated $40,000 through his foundation to establish two golf scholarships in Mack’s name.

Tiger Woods had to wait 19 months to try to defend his title in the Masters, so waiting two years for induction into the World Golf Hall of Fame shouldn't be a problem.

The induction ceremony had been scheduled for 2021, presumably during The Players Championship. Now it will move to the same week in 2022. Among concerns was the state of the pandemic and whether fans — or how many — will be allowed during the Florida swing.

"Given the uncertainties of the COVID-19 pandemic, moving the ceremony back a year will give us a better opportunity to properly recognize and honor this important class,” said Greg McLaughlin, CEO of the World Golf Foundation.

THE RACE FOR REED

Patrick Reed has a chance to make European Tour history as the first American to win what now is called the Race to Dubai. So does Collin Morikawa, the 23-year-old PGA Championship winner, who has yet to play in continental Europe.

They are among the leading five players going into the season-ending DP World Tour Championship in Dubai, with Reed leading by 460 points over Tommy Fleetwood and Morikawa trailing by 546 points.

Reed reached the top in this pandemic-shortened season with a victory in the World Golf Championship in Mexico City, a tie for third in the BMW PGA Championship at Wentworth, along with a pair of 13th-place finishes in majors (PGA, U.S. Open) and a tie for 10th in the Masters.

While no American has ever topped the European Tour points list, it’s rare for anyone outside Europe to win the Harry Vardon Trophy. Only five players born outside Europe have won, most recently Ernie Els of South Africa in 2003 and 2004. Retief Goosen won the previous two years. Bobby Locke won three times (1946, 1950 and 1954), while a fourth South African, Dale Hayes, won in 1975.

The only other winner from outside Europe was Greg Norman of Australia in 1982.

Justin Thomas has not finished worse than a tie for 12th in his last six tournaments dating to the Tour Championship and including the U.S. Open and Masters. The most recent was a tie for 12th at the Mayakoba Golf Classic, but he left Mexico with questions about his weekend.

“I played really terribly, to be honest, the last three, four, five Sundays having a chance to win,” he said. “So I’ve got to figure that out.”

He was five shots behind at Shadow Creek and closed with a 74 in the CJ Cup to finish 12 shots behind. At Sherwood for the Zozo Championship, his one-shot lead became a one-shot deficit when he shot 69. His trouble at the Masters came more on Saturday, when he had a share of the 36-hole lead and shot 71, falling six shots behind Dustin Johnson. And he went into the final round at Mayakoba four shots behind after a 62 on Saturday, only to shoot 69 and finish six back.

It’s not all bad. He’s giving himself chances. He was done in on Sunday at Mayakoba by a double bogey on the 10th hole.

“One swing away from, even with a bad round, finishing top 5,” said Thomas, who opened with a 72. “A lot of positives to look at, but definitely not pleased with how the week turned out.”

NBC is adding another caddie to its golf broadcast team. John Wood, who most recently worked for Matt Kuchar, will work Golf Channel telecasts and select tournaments on NBC. He starts at Kapalua. Jim “Bones” Mackay works primarily NBC events. ... Juli Inkster, who tied for eighth in 2003, is the last defending U.S. Women’s Open champion to finish in the top 10. ... David Howell, a two-time Ryder Cup players, has been appointed to the European Tour board.

Angela Stanford's victory in the Volunteers of America Classic was only the fourth time in the last 10 years that a player in her 40s has won on the LPGA Tour. Stanford has done it twice.

“I don’t know if I could say that without getting fined.” — Brooks Koepka, when asked to describe his year.