Lindsey Horan back with US after recovering from COVID-19 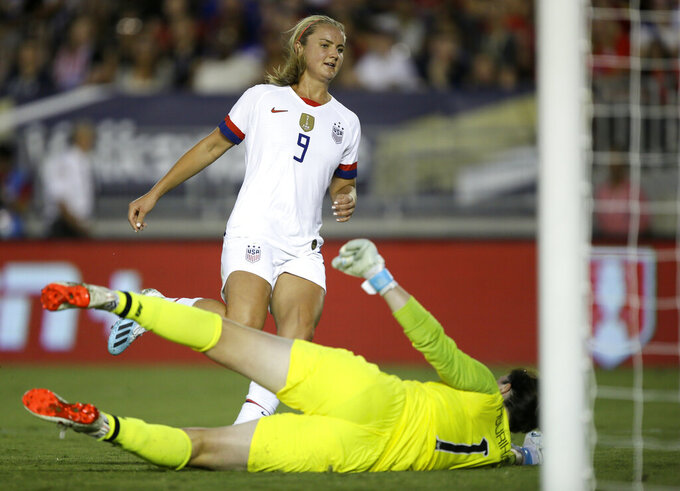 FILE - In this Aug. 3, 2019, file photo, United States midfielder Lindsey Horan, top, scores against Ireland goalkeeper Marie Hourihan during the first half of an international friendly soccer match in Pasadena, Calif. Horan described herself as miserable when she caught COVID-19 late last year. The 26-year-old midfielder was set to accompany the U.S. national team to the Netherlands for their final match of the year when U.S. Soccer announced her diagnosis on Nov. 18. (AP Photo/Alex Gallardo, File)

The 26-year-old midfielder was set to accompany the U.S. national team to the Netherlands for their final match of the year when U.S. Soccer announced her diagnosis on Nov. 18.

Now back with the team in training camp, Horan said she has fully recovered.

“COVID time was not a fun time, I’ll say that much,” Horan said Friday. “There was probably a week and a half there that was pretty miserable. And obviously, I wouldn’t want anyone to have to go through that. I’m very lucky that I’m healthy and I’m young and I came out of it OK.”

Horan, who plays professionally for the Portland Thorns in the National Women's Soccer League, was the first national team player known to have contracted the coronavirus. Alex Morgan revealed on social media recently that she and her family had contracted COVID-19 over the holidays. Morgan is married to fellow soccer player Servando Carrasco and they have a 7-month-old daughter named Charlie.

Both Horan and Morgan were on the national team squad that won the 2019 World Cup in France.

Horan, a native of Golden, Colorado, is known as a physical player who eschewed playing in college to turn professional right out of high school. She played in France for Paris Saint-Germain for several years before moving back to the United States to join the Thorns in 2016. Horan played for the Thorns last summer in the NWSL’s Challenge Cup in a bubble in Utah, then played in all four of Portland’s fall series matches.

Horan has appeared in 86 matches for the national team with 19 goals and 28 assists. She made her first appearance with the senior national team at 18 in the 2013 Algarve Cup.

She's thrilled to be back in camp as the team heads into a pair of exhibition matches against Colombia next week in Orlando, Florida. The national team then hosts the SheBelieves Cup in February before preparing for the Olympics in Tokyo this summer. The team secured a spot in the field last year before the coronavirus took hold in the United States.

“Obviously, now I’m doing well and in camp, and I feel 100%. But yeah, just not an experience that I enjoyed whatsoever," Horan said about her bout with the virus. “And I missed out on getting to play with the team, so that was a bummer. It’s scary just knowing what other people might have to go through that could be a lot worse than me.”

She said she had many of the symptoms of COVID-19 while she was ill, except she never lost her senses of smell and taste.

Putting the experience behind her, Horan is happy to be back at work with the team rather than trying to keep up with training by herself.

“I think the best way to put it is — we even talk among players here — you can do however much in your offseason to try to emulate what we do here and prepare as much as possible, but the second we get here, it’s so different," she said. "You’re playing with some of the best players in the world and competing every single day and knowing that your spot is always up for grabs. I think that’s what makes this team so special and what makes this environment so competitive and welcoming for everyone to get better.”