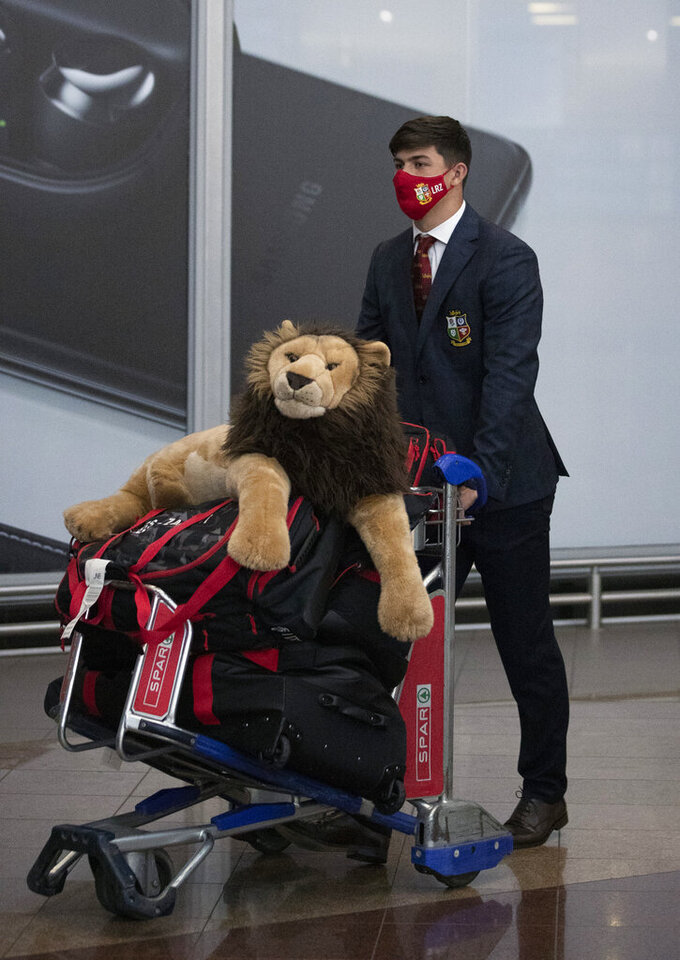 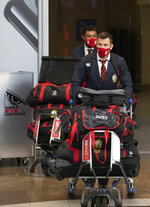 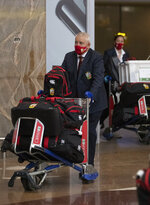 CAPE TOWN, South Africa (AP) — The British and Irish Lions' arrival in South Africa on Monday coincided with the country reverting to stricter lockdown measures amid a surge in COVID-19 cases in the province where the Lions will spend most of their time.

The Lions squad flew into Johannesburg's OR Tambo International Airport and were whisked away to a hotel, having already made it clear they would not hold any media engagements because of the threat of the virus.

Members of the Lions party were screened on arrival but also had their luggage sprayed with medical sanitizer as they boarded a bus outside the airport.

Johannesburg and the surrounding Gauteng province are being hit especially hard by South Africa's third wave of coronavirus infections, with the province accounting for nearly 70% of all new cases in the country.

The wave prompted South African President Cyril Ramaphosa to announce stricter national restrictions Sunday night, including an extended night time curfew, a ban on all gatherings and the suspension of alcohol sales for the next 14 days.

The regulations don't directly affect the Lions tour as top-level sport is still allowed to go ahead without spectators. But parts of the South African media have called for Lions games to be moved away from Gauteng to Cape Town, where virus cases are also increasing but not so steeply.

The Lions are due to play their first three games in Gauteng, starting against South African domestic team the Lions on Saturday in Johannesburg. The British and Irish Lions will move to Cape Town for the middle part of their eight-game tour, which will include the first test against world champion South Africa.

The Lions then return to Gauteng for back-to-back tests in Johannesburg to complete the tour.

South Africa has already had its buildup to the series complicated by the virus. The Springboks announced on Sunday that three of their players had tested positive for the coronavirus as the squad gathered in Johannesburg, causing the team to cancel a training session and put all players and backroom staff in isolation in their hotel rooms.

SA Rugby said Monday that the Springboks had been cleared to return to training after “feedback” from a medical advisory group put in place for the tour.

One of the players to test positive, scrumhalf Herschel Jantjies, had been cleared to join his teammates at training. There were no updates on the other two players who tested positive, prop Vincent Koch and wing Sbu Nkosi.

South Africa director of rugby Rassie Erasmus said he expected the first of the Springboks' two warmup tests against Georgia to still go ahead in Pretoria on Friday because the three players had been effectively isolated.

That test will be South Africa's first since the Rugby World Cup final in Japan in November 2019.