Lions, Vikings both stumbling to the finish 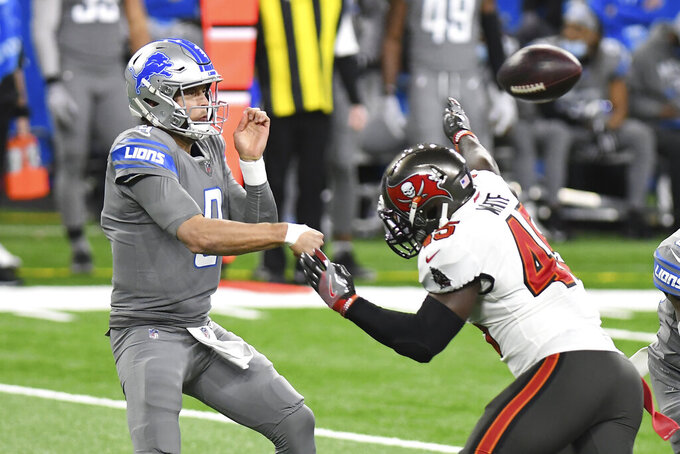 DETROIT (AP) — This season will end like so many others for Matthew Stafford: His Detroit Lions have a losing record and won't be in the postseason.

What's different now is that there are real questions about Stafford's future with the Lions.

“I’m not thinking about it," Stafford said earlier this week. "All I’m thinking about is the Vikings and trying to get myself healthy. I know that’s probably hard for people to believe, but that’s the way this business is.”

Detroit hosts Minnesota on Sunday in a matchup of two teams that are out of the NFC playoff picture. The Lions are heading into an important offseason after firing their coach and general manager. Stafford has been a mainstay in Detroit for 12 years, but given the uncertainty about the team's plan going forward, it's easy to imagine him being elsewhere next season.

And if this is Stafford's last game with the Lions, it could be anticlimactic. The coronavirus pandemic means there won't be a packed stadium of fans in Detroit — and Stafford's own status has been unclear because of thumb, rib and ankle injuries. The Lions (5-10) are coming off a 47-7 loss to Tampa Bay in which Stafford didn't play much.

So Detroit will finish with double-digit losses for a third straight season and the sixth time in Stafford's tenure. That's despite the efforts of a quarterback who is closing in on 45,000 yards passing for his career.

“You play this game to go out there and play in big-time moments, and we didn’t do a good enough job this year as a team to make sure we have those opportunities this late in the season,” Stafford said. “That’s obviously disappointing and something that you want to rectify as a player, as a teammate, as a part of an organization.”

“Any time you go out there and play — you hear from athletes all the time, it doesn’t matter what you’re playing, what you’re competing at — go out there to win. Go out there and compete," Minnesota safety Harrison Smith said. "So that’s the message. You don’t want to put undisciplined play, uninspired play on film. Put who you see yourself as on film.’’

Pro Bowl running back Dalvin Cook won’t play for the Vikings following the death of his father. Left tackle Riley Reiff was placed on the COVID-19 reserve list Wednesday, giving the Vikings the opportunity to give rookie Ezra Cleveland — who has started eight games at right guard — a look there if they want. Tight end Kyle Rudolph’s 10th season is over early. He’ll miss his fourth straight game with a foot injury.

Detroit receiver Kenny Golladay is expected to miss another game with a hip injury. He's played only five games this season.

Vikings wide receiver Justin Jefferson has some obvious goals to play for, needing 111 yards to break the NFL rookie record for yards receiving set by Anquan Boldin (1,377 in 2003) and just 47 yards to top the franchise rookie record held by Randy Moss (1,313 in 1998). Jefferson has already bested Moss in receptions.

“To actually reach my goals and reach beyond my goals, I mean, that’s something special,” said Jefferson, who set his aim before the season for 60 catches, 1,000 yards and six touchdowns. “I’ve just got to keep going and keep building on my game and get better and better each season.”

After ranking sixth, ninth, first, sixth, fifth and 11th in fewest points allowed over their first six seasons under coach Mike Zimmer, the Vikings have plummeted this year to 28th with an average of 29.3 points surrendered per game. They hit bottom in the loss at New Orleans last week, with 264 yards rushing allowed.

Lions interim coach Darrell Bevell was a close contact of someone who tested positive for COVID-19, so last weekend he became the first head coach to miss a game because of the league’s protocols during the pandemic.

He said this has still been a great experience.

“I've learned a lot,” he said. “There's been a lot that's been thrown at me in a short period of time, but like I've told you many, many times, I love this game, I love being around these players and I love, really, everything that goes on with it.”

Minnesota beat Detroit 34-20 on Nov. 8. Kirk Cousins threw for 220 yards and three touchdowns for the Vikings. Stafford left that game for concussion evaluation and backup Chase Daniel threw a touchdown and an interception.